Pilgrim's Pride Corporation (PPC - Free Report) reported first-quarter 2020 results, with the bottom line declining year over year. Nevertheless, the top line increased on a year-over-year basis. The upside can be attributed to improved performance in the United States and European operations. Let’s take a closer look.

Quarterly adjusted earnings of 18 cents per share declined 48.6% from the figure reported in the year-ago quarter. The metric includes a one-time gain on case settlement of 9 cents per share. Including this, earnings per share came in at 27 cents.The downside might have been caused by lower margins. The Zacks Consensus Estimate was pegged at 17 cents.

In the reported quarter, Pilgrim's Pride generated net sales of $3,074.9 million, up 12.9% year over year. Results were backed by higher sales in the United States and European operations.

Revenues in the U.S. operations amounted to $1,926.9 million, up 2.3% year over year. The upside was driven by strong performance across all segments. Further, the company’s business model along with promptness in changing mix aided growth.

Mexican operations generated revenues of $325.8 million in the reported quarter, down 0.1% year over year. The downtick was caused by weak macro conditions in Mexico, which more than offset growth in Prepared Foods in the region.

Revenues from European operations surged 60% year over year to $822.3 million. The uptick was driven by increased demand across retail as well as robust pork exports mainly to China. Also, the company’s initial execution of operational improvements bodes well. However, lower demand in foodservice acted as a deterrent.

Further, adjusted EBITDA was $165.5 million, down 19% year over year. Adjusted EBITDA margin of 5.4% declined 2.1 percentage points on a year-over-year basis.

Pilgrim's Pride is committed toward boosting operations through Key Customer strategy as well as augmenting capacities and capabilities. The company continues to engage in evolving the portfolio with product diversification.

Shares of this Zacks Rank #4 (Sell) company have declined 18.1% in the past year against the industry’s growth of 2%. 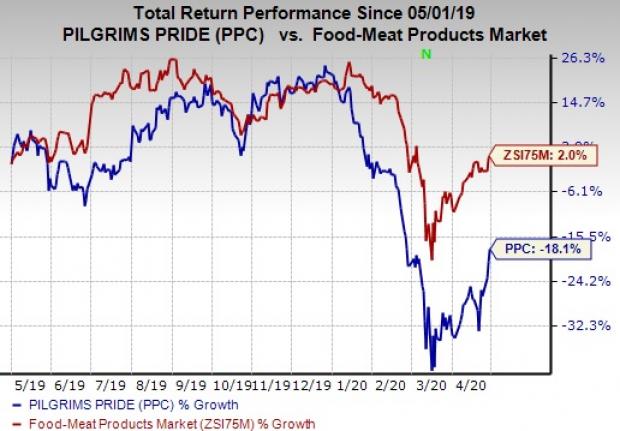 General Mills (GIS - Free Report) has a long-term earnings growth rate of 7.5% and a Zacks Rank #2.

Conagra Brands (CAG - Free Report) has a long-term earnings growth rate of 7% and a Zacks Rank #2.