Seattle Genetics, Inc. (SGEN - Free Report) incurred an adjusted loss of 64 cents per share for the first quarter of 2020, narrower than the Zacks Consensus Estimate of 81 cents but wider than the year-ago loss of 32 cents.

Revenues of $234.5 million were up 20.1% year over year, primarily driven by higher royalty revenues in the reported quarter and sales from the lead drug, Adcetris. The top line also comprehensively beat the Zacks Consensus Estimate of $212 million.

Shares of Seattle Genetics have soared 27.5% in the year so far versus the industry’s decrease of 0.6%. 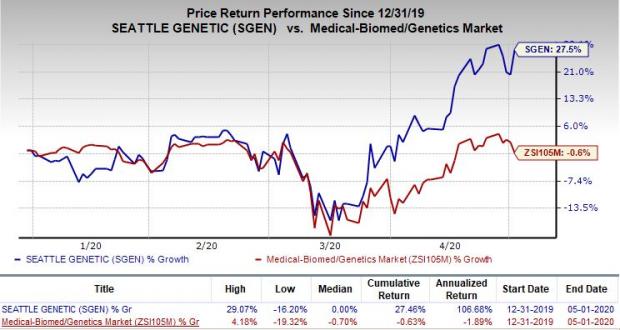 Adcetris generated net sales of $164.1 million in the United States and Canada, up 22% year over year. The drug is also being evaluated in several label expansion studies. A successful development and a potential approval will be a major boost to the company.

Newly-launched Padcev in its first full quarter since its launch generated sales worth $34.5 million. On the first-quarter conference call, management seemed pleased with the uptake of Padcev so far, which exceeded its internal predictions.

Research and development (R&D) expenses of $195.2 million escalated 23.3% year over year. During the first-quarter earnings call, management informed that R&D expenses were high, primarily due to higher investment in developing the late-stage pipeline candidates.

Selling, general and administrative (SG&A) expenses shot up 52.1% year over year to $122.2 million, mainly on account of higher costs related to the launch preparations of Padcev and Tukysa.

Seattle Genetics reiterated its guidance for 2020. The company projects Adcetris’ full-year net sales in the range of $675-$700 million, unchanged from its last projection.

The company expects collaboration and license revenues in the band of $30-$50 million while royalty revenues are anticipated within $105-$115 million, both unchanged from the earlier provided guidance.

Seattle Genetics expects SG&A expenses within $475-$525 million. R&D is estimated in the bracket of $860-$950 million, which too is intact with the last expectation.

Seattle Genetics is evaluating Adcetris in combination with Bristol-Myers’ (BMY - Free Report) Opdivo for treating Hodgkin and non-Hodgkin lymphoma. A successful development and a potential approval for Adcetris to address additional indications will be a major boost to the company.

In April 2020, the FDA approved Seattle Genetics’ oral tyrosine kinase inhibitor (TKI) Tukysa (tucatinib) in combination with Roche's Herceptin (trastuzumab) and Xeloda (capecitabine). The drug combo is now approved to treat adult patients with locally advanced/metastatic HER2-positive breast cancer including those with brain metastases, having received one or more prior anti-HER2-based regimens in the metastatic setting.

Tukysa is Seattle Genetics’ third drug to be approved by the FDA. Though it did not contribute to sales in the first quarter, it remains to be seen how the drug performs in the near future.

Meanwhile, in April 2020, Seattle Genetics announced an update on the phase Ib/II EV-103 study evaluating Padcev in combination with Merck’s (MRK - Free Report) PD-1/L1 inhibitor, Keytruda (pembrolizumab), for addressing patients with unresectable locally advanced/metastatic urothelial cancer who are unable to receive cisplatin-based chemotherapy in the first-line setting. The combo has been granted a Breakthrough Therapy designation by the FDA in the first-line setting.

Following discussion with the FDA authorities, management stated that data from the cohort K as well as other outcomes from the EV-103 study on the Padcev combo could potentially support registration under accelerated approval regulations in the United States.

Padcev is also being evaluated as a monotherapy in the phase II EV-202 study for treating a range of solid tumors. A potential label expansion of the drug will help it gain access to a broader patient population and bump up sales going forward.

We note that the approval of Padcev and Tukysa should reduce Seattle Genetics’ heavy dependence on Adcetris in the days ahead and significantly boost its top-line growth.