Esperion’s shares were up 2.1% in after-market trading on May 6, following the earnings release. However, the company’s stock has declined 31.9% so far this year compared with the industry’s 9.9% decrease. 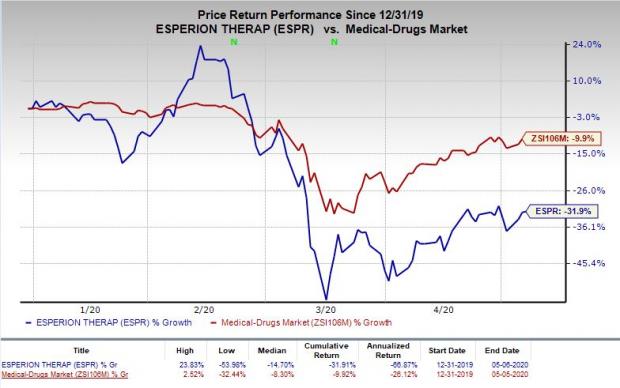 In February, the FDA approved the company’s two drugs — Nexletol and Nexlizet — as a treatment for elevated LDL-C (bad cholesterol) in patients with hypercholesterolemia or mixed dyslipidemia. Please note that while Nexletol is bempedoic acid monotherapy tablet, Nexlizet is a combination of bempedoic acid and Merck’s (MRK - Free Report) Zetia (ezetimibe). Both these drugs received approval in Europe last month. While Nexletol will be available under the trade name of Nilemdo, Nexlizet will be available as Nustendi in Europe.

Moreover, the company launched Nexletol in the U.S. market on Mar 30. The company also achieved more than 50% commercial coverage and more than 20% Medicare Part D coverage for both drugs in the United States.

Revenues in the reported quarter included $0.8 million of net product sales of Nexletol and $1.0 million in collaboration revenues, primarily from Daiichi Sankyo.

Please note that the company had signed an agreement with Daiichi Sankyo to commercialize Nilemdo and Nustendi in Europe. The significantly high revenues in the year-ago quarter were due to initial recognition of the upfront payment from Daiichi Sankyo.

The company plans to launch Nexlizet in June, and Nilemdo and Nustendi in the third quarter of 2020. In April, the company signed an agreement with Japan-based Otsuka Pharmaceutical for the development and commercialization of Nexletol and Nexlizet tablets in Japan.

Research and development (R&D) expenses decreased 25.1% from the year-ago period to $34.7 million. The decline was mainly driven by lower costs following the completion of enrollment in the ongoing CLEAR CVOT study.

Selling, general and administrative expenses (SG&A) were $41.6 million, compared with $12.2 million in the year-ago period. The significant increase was primarily due to costs to support commercialization activities for Nexletol and Nexlizet.

Esperion provided updated guidance for collaboration revenues and operating expenses in 2020. The company continues to expect a milestone payment of $150 million from Daiichi Sankyo, upon first commercial sale in Europe. The company recorded $60 million in upfront payment from Otsuka Pharmaceuticals in April.

The company anticipates R&D expense for 2020 to be lower in the range of $135-$145 million, compared with $145-$155 million expected previously. SG&A expense guidance also lowered to the range of $200-$210 million from $225-$235 million previously expected. The decline in operating expenses guidance was due to changes in planned operating expenses as result of COVID-19 environment and other adjustments.

Esperion reported encouraging first-quarter results. The company’s prospects received a boost with approval for its two drugs in the United States and Europe. The launch of these drugs over the coming few months will likely create a steady revenue stream in the latter part of 2020. However, significant increase in operating expenses will hit the bottom line. Meanwhile, uncertain conditions due to COVID-19 remain a concern.

We note that clinical data and estimated list prices for Nexletol and Nexlizet seem competitive compared to other LDL-C lowering drugs including Amgen’s (AMGN - Free Report) Repatha and Sanofi’s (SNY - Free Report) Praluent. However, we prefer to wait till data on launch uptake of the drugs are available.