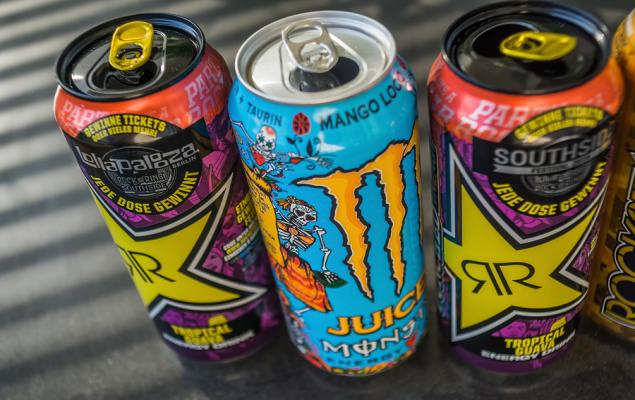 Monster Beverage Corporation (MNST - Free Report) reported impressive earnings and sales numbers in first-quarter 2020, driven by meager impacts from the coronavirus pandemic. Notably, its top and bottom lines not only outpaced the Zacks Consensus Estimate but also improved on a year-over-year basis. The company notes that the COVID-19 outbreak had minimal impact on its first-quarter results, as its flavor manufacturing facilities, co-packers, warehouses and shipment facilities remained operational, maintaining continued supplies.

However, it stated that its April sales witnessed significant impacts from the pandemic, while bottler/distributor sales to retailers in the United States experienced lesser impacts. Moreover, the company notes that there has been a change in consumer channel preference since the middle of March, with a rise in in-home consumption and a fall in immediate consumption. So far in the second quarter, its sales have been adversely impacted by lower traffic in convenience stores and gas stations along with a decline in food service on-premise channel. Meanwhile, the e-commerce, club store, mass merchandiser, and grocery and related businesses have witnessed stable trends.

We note that shares of this Zacks Rank #3 (Hold) company have declined 10.2% in the past three months compared with the industry’s plunge of 19.9%. You can see the complete list of today’s Zacks #1 Rank (Strong Buy) stocks here. 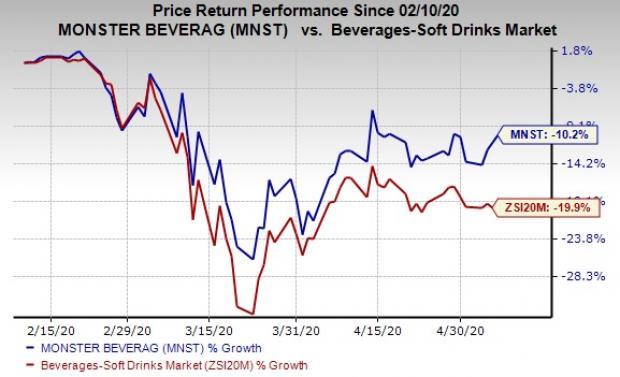 Monster Beverage’s earnings of 52 cents per share rose 8.2% year over year and outpaced the Zacks Consensus Estimate of 48 cents.

Net sales of $1,062.1 million improved 12.3% year over year and surpassed the Zacks Consensus Estimate of $997 million. Moreover, gross sales (net of discounts and returns) rose 13.4% to $1,236.1 million. Improvement in gross and net sales was mainly attributed to gains from the Monster Energy brand energy drinks internationally as well as Reign Total Body Fuel high-performance energy drinks. The gains were partly negated by unfavorable currency fluctuations, which hurt net and gross sales by $10.4 million and $11.2 million, respectively.

Monster Energy Drinks: The segment’s net sales rose 14% year over year to $992.5 million. Robust gains from the sale of Monster Energy and Reign Total Body Fuel brands were partly offset by a negative impact of $10 million from adverse currency rates.

Other: Net sales at the segment, which includes some products of American Fruits & Flavors sold to independent third parties (AFF Third-Party Products), fell 3.8% year over year to $5.1 million.

Operating income of $365 million grew 17.2% year over year. Moreover, the operating margin expanded 150 bps to 34.4% in the reported quarter.

Monster Beverage ended the first quarter with cash and cash equivalents of $701.8 million, and total stockholders' equity of $3,870.9 million.

In the reported quarter, the company bought back 10.5 million shares for $579.3 million (excluding broker commissions), with an average price of $55.22 per share. As of May 7, 2020, it had $441.5 million remaining under the previously authorized share repurchase plan.

Monster Beverage remains committed to product launches and innovation to boost growth. In first-quarter 2020, the company launched several products in the United States, including a line of Reign Inferno Thermogenic Fuel, two new energy drinks in the Monster Ultra line, a line of Java Monster 300, and a line of Monster Hydro Super Sport as well as NOS Turbo. Further, it launched various Monster Energy brand energy drinks and Reign Total Body Fuel high-performance energy drinks in international markets. Moreover, its affordable energy brand – Predator – was launched in additional international markets, including Mexico, in the first quarter. The company plans to launch the brand to more markets in 2020.

Other notable product launches included the Monster Energy Dragon Tea in Brazil in the first quarter and in China in April 2020. It also added the Burn Dark Energy to its portfolio in Russia, a new Nalu energy tea line in Belgium, and the national launch of Mother Epic Swell in Australia, after a limited launch last year.