Kinross Gold Corporation (KGC - Free Report) logged a profit of $122.7 million or 10 cents per share in first-quarter 2020, up from $64.7 million or 5 cents in the year-ago quarter. Results benefited mainly from higher margins, which were partly offset by higher income tax expense. The figure also topped the Zacks Consensus Estimate of 8 cents.

Attributable gold production was 567,327 ounces in the reported quarter, down 6.4% year over year. The downside was mainly due to lower production at Kupol, Paracatu and Chirano as well as the end of production at Maricunga, which were partly offset by higher production at Fort Knox.

Average realized gold prices were $1,581 per ounce in the quarter, up 21% from the year-ago quarter’s figure.

Margin per gold equivalent ounce sold was $827 in the quarter, up 33% year over year.

Long-term debt was $2,488 million at the end of the reported quarter, up 33% year over year. Notably, the company has no scheduled debt maturities until September 2021.

Kinross has withdrawn its 2020 view in April although the coronavirus pandemic did not have any material impact on its operations during the first quarter. The company believes that this decision is prudent considering the significant impact of the pandemic on global economy, commercial activities, global health and further potential business disruptions.

Shares of Kinross have rallied 130.5% in the past year compared with the industry’s 86.3% growth. 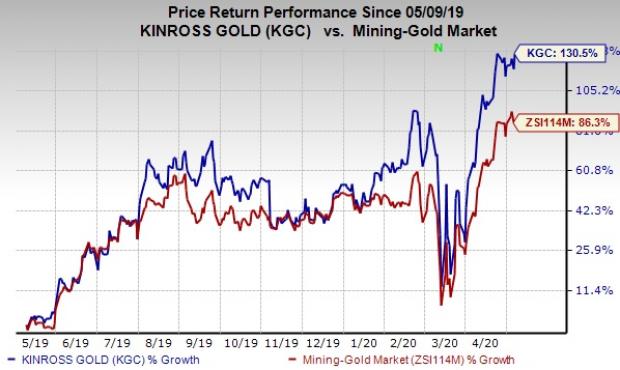 Franco-Nevada has an expected earnings growth rate of 22% for 2020. The company’s shares have surged 105.3% in the past year.