Last week, a host of auto companies reported quarterly numbers. Most of them witnessed a decline in earnings and revenues due to low demand for vehicles and weak consumer confidence amid the COVID-19 pandemic. Nonetheless, some of them managed to deliver an earnings beat despite coronavirus woes. U.S. auto biggie General Motors came up with better-than-expected earnings on the back of solid contribution from the North American segment.

1. General Motors (GM - Free Report) reported adjusted earnings of 62 cents per share for first-quarter 2020, surpassing the Zacks Consensus Estimate of 18 cents. Stronger-than-expected contribution from the North American segment led to the outperformance. However, the bottom line declined 56% from the year-ago figure of $1.41 a share. The top U.S. carmaker reported revenues of $32,709 million, topping the Zacks Consensus Estimate of $32,587 million. However, the top line decreased from the year-ago figure of $34,878 million. The automaker’s global market share was 7.9% in the reported quarter, reflecting a decline from 8.3% in the year-ago period. The firm has put the brakes on quarterly cash dividend and suspended the share-repurchase program, citing the uncertainty caused by the coronavirus pandemic. (General Motors Q1 Earnings Beat on Solid GMNA Segment)

2. Genuine Parts Company (GPC - Free Report) reported adjusted earnings of 92 cents per share in first-quarter 2020, missing the Zacks Consensus Estimate of $1.12. The bottom line also declined from the year-ago profit of $1.28 a share. The firm reported net sales of $4.56 billion, missing the Zacks Consensus Estimate of $4.61 billion. The top line also decreased 3.8% year over year. Genuine Parts returned $207 million to shareholders during the March-end quarter, including $111 million in the form of quarterly dividends and $96 million in share repurchases. However, the company suspended the existing share-repurchase program until further notice amid the coronavirus crisis. Genuine Parts scrapped its full-year 2020 guidance as it expects the pandemic’s impact to strain the company’s operations. (Genuine Parts Q1 Earnings & Revenues Miss Estimates)

4. Group 1 Automotive, Inc. (GPI - Free Report) reported adjusted earnings per share of $1.66 in first-quarter 2020, beating the Zacks Consensus Estimate of $1.05. Higher-than-expected revenues from new and used vehicles led to the outperformance. The bottom line, however, declined from the prior-year quarter’s $2.06 per share. Revenues of $2.69 billion fell 4.2% year over year. The top line, however, beat the Zacks Consensus Estimate of $2.35 billion.Amid coronavirus-led uncertainty, Group 1 refrained from providing any guidance. Depressed demand for vehicles amid weak consumer confidence is expected to reflect on its second-quarter results. The firm expects the service business to recover more quickly than vehicle sales. (Group 1 Q1 Earnings & Sales Top Estimates, Down Y/Y)

5. BorgWarner Inc. (BWA - Free Report) delivered adjusted earnings of 77 cents per share in first-quarter 2020, beating the Zacks Consensus Estimate of 49 cents. The reported figure was lower than the year-ago quarter’s $1 per share. BorgWarner’s net sales declined 11.2% year over year to $2,279 million on account of unfavorable impact of foreign-currency fluctuations. The reported figure, however, beat the Zacks Consensus Estimate of $2,014 million.For full-year 2020, the company projects net sales of $7.25-$8 billion, down from the previous guidance of $9.75-$10.07 billion. Free cash flow is expected in the band of $100-$300 million for 2020, marking a decline from the prior guidance of $675-$725 million. Moreover, full-year operating cash flow is expected in the range of $530-$780 million. (BorgWarner's Q1 Earnings & Revenues Surpass Estimates) 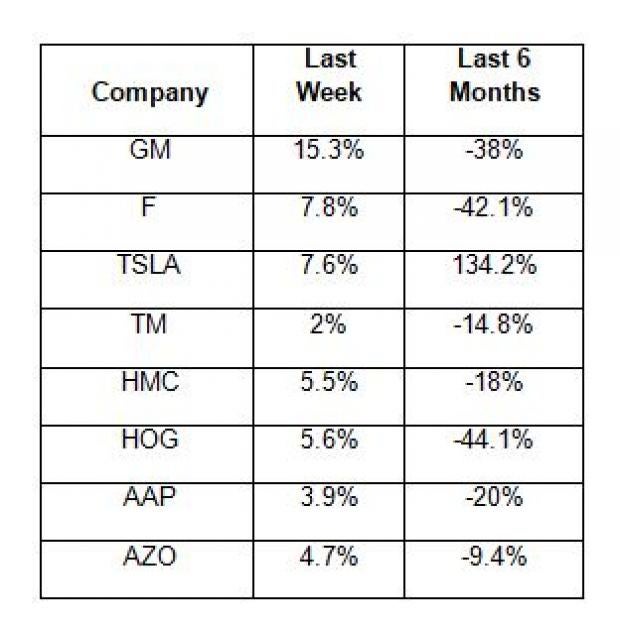