Ridesharing pioneer, Uber (UBER - Free Report) , wants control of the quickly saturating food delivery market. The company is in talks to purchase Grubhub (GRUB - Free Report) in an all-stock deal. Both groups of investors are excited about this potential acquisition, with UBER shares up as much as 8.5% and GRUB shares surging over 35% following the news of a possible deal.

Grubhub once had firm control of the meal delivery market but has lost its grip in the past couple years, and SoftBank-backed DoorDash has taken control with a 42% market share in the US, according to Second Measure who created the graphic below. 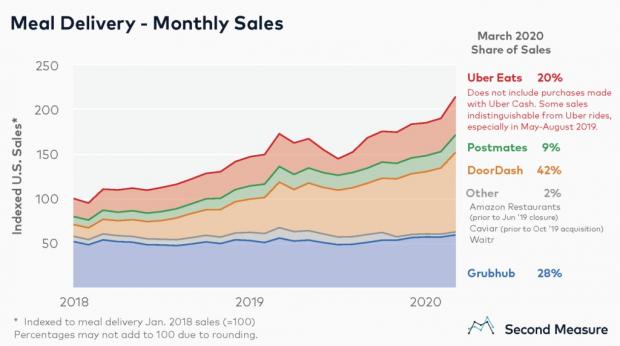 This acquisition would give #3 Uber Eats decisive control of the food delivery market in the US with a combined market share of 48%.

Grubhub proposed a deal to Uber to acquire the company at 2.15 UBER shares for each GRUB share. UBER closed the day at over $32 a share, which would value GRUB shares at right around $70 per share (currently trading at $60 following the news).

This proposal is still yet to be reviewed by Uber's board. Nothing is set in stone.

Opportunity For Investors On Both Sides

Grubhub (GRUB - Free Report) has been struggling to keep its bottom line above water in recent quarters. The fierce competition in the space has forced the business to offer further promotions and discounts to maintain its customer base. This has been squeezing the company's margins and inhibiting its ability to profit.

In an industry where nothing but price point differentiates you from your competitors, economies of scale are critical. The combined meal delivery business would provide the scale that both Uber and Grubhub need. Grubhub's domination of the NYC market will make a lovely crown jewel for Uber Eats' international food delivery empire.

Uber's management team is planning on exiting every market where Uber Eats doesn't hold the #1 or 2 spot. Uber knows how important being the biggest is. The company has been able to turn an operating profit in its flagship Rides segment because of its enormous scale. Now the business is trying to do the same with its growing Eats division.

Eats has appeared to be a topline hedge for Uber in recent months. This pandemic is keeping the world at home, leaving ridesharing businesses idle, but meal delivery services have never been hotter. Eats saw an over 50% year-over-year boost in Q1, and I suspect that Q2 will illustrate even stronger results. The business is still losing the company money and weighing heavily on the bottom line. It needs size for profitability, and Grubhub would provide the necessary economies of scale.

If Uber and Grubhub can settle a deal, it will unhinge the food delivery market. It would give Uber Eats the scale it needs to beat out its competition and allow it to turn a profit much sooner than initially predicted. This deal would benefit both GRUB and UBER shareholders.