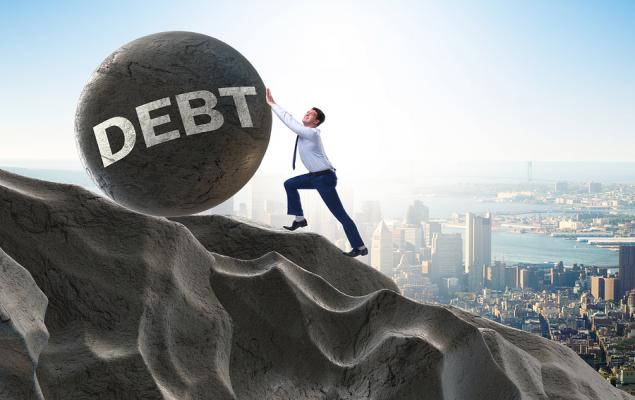 Intelsat (I) Files for Bankruptcy, Aims to Emerge Stronger

Intelsat S.A. has reportedly filed for bankruptcy protection in order to raise cash and prepare the spectrum for public auctioning as it remains weighed down by the huge debt burden. The company expects that Chapter 11 bankruptcy protection funding will enable it to tide over the storm until billions of dollars are made available through public auctioning of its C-band spectrum later this year.

In concurrence with the bankruptcy filing, Intelsat has earmarked $1 billion in debtor-in-possession financing to sustain operations during the proceedings and make necessary investments to prop up the spectrum for the auction. The company expects to emerge stronger from this financial restructuring process with greater fiscal viability to continue launching new satellites, building a comprehensive ground network and adding innovative services to its portfolio.

Despite all these endeavors, the stock has plummeted 97.6% in the past year. Notably, Intelsat’s shares declined sharply in November 2019 when investors resorted to panic selling as the Federal Communications Commission (“FCC”) lent its support to the Congress’ move to hold a public auction for its C-band spectrum. The stock declined 67.1% in 2019, making it the worst performer in the Zacks Satellite and Communication industry. 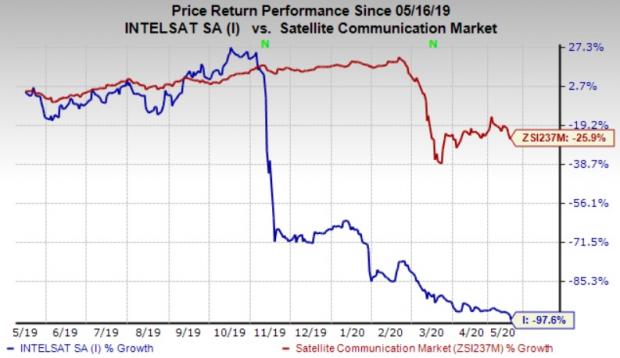 Intelsat along with some other satellite providers had decided to sell some of the airwaves in the 3.7 gigahertz-to-4.2 gigahertz area of the spectrum, widely known as the C-band, in a private auction to raise cash and repay its nearly $15-billion debt burden. The airwaves acquired over the years were mostly used by these firms to deliver videos to TV stations and considered surplus resources. Moreover, the coveted spectrum was much in demand by telecom carriers for the deployment of 5G and offered a huge opportunity to rake in large sums of money.

However, several U.S. senators introduced a bill titled the ‘5G Spectrum Act’ that mandated the public auctioning of the C-band to start no later than 2020-end and sharing at least half of the proceeds with the FCC. With the FCC Chairman Ajit Pai publicly supporting this view, shares went on a tailspin as companies like Intelsat were set to lose a significant chunk of legitimate money.

The company expects to secure $4.86 billion from FCC through spectrum auction. Intelsat is bound to inform the FCC by May 29 whether it would accept the payments and quickly clear the airwaves. The bankruptcy filing in the interim is likely to offer the company a window to put a hold on any judgment regarding the dispute with the FCC.

Furthermore, despite the dismal stock performance, Intelsat is focusing on five operational priorities, which are likely to stabilize its core business, improve competitive position, return it to growth and optimize asset value. Firstly, the company aims to leverage all assets within its global network for maximum return. Intelsat further intends to scale up its managed services across enterprises, maritime, business jet commercial and aeronautical government opportunities, and build powerful distribution channels to amplify its direct marketing efforts.

Additionally, the company expects to lead the industry in seamless implementation of satellite-based telecommunication solutions with state-of-the-art infrastructure. Intelsat aims to invest in the development of standards-based terminals and ground hardware, and innovative and software-defined technology. The company also intends to participate in 3GPP and other broad telecom sector standards development. In addition, it intends to maintain a disciplined stance on cash flow management and enhance the productivity of its deployed capital. Last but not the least, the company expects to optimize its spectrum rights to maintain sector leadership and provide regulatory and operational guidance based on market experience.

Intelsat is transforming its business and sector by investing in and deploying state-of-the-art technologies that will change the type of applications it serves and increase global demand for broadband connectivity. It intends to boost revenues by driving stability in the core business, employing a disciplined yield management approach and emphasizing the development of strong distribution channels for its four primary customer sets of broadband, mobility, media and government. Intelsat believes that developing differentiated managed services and investing in related software and standards-based technology will help enhance its relevance within the broader telecommunications landscape.

Iridium delivered a positive earnings surprise of 24.2%, on average, in the trailing four quarters.

Acacia has a long-term earnings growth expectation of 30%. It delivered a positive earnings surprise of 17.7%, on average, in the trailing four quarters.