In February 2020, the FDA accepted the new drug application (NDA) for Qinlock to treat patients with fourth-line GIST. In December 2019, the NDA application was filed for the same.

Shares of Deciphera have declined 10.4% so far this year against the industry’s increase of 7.7%. 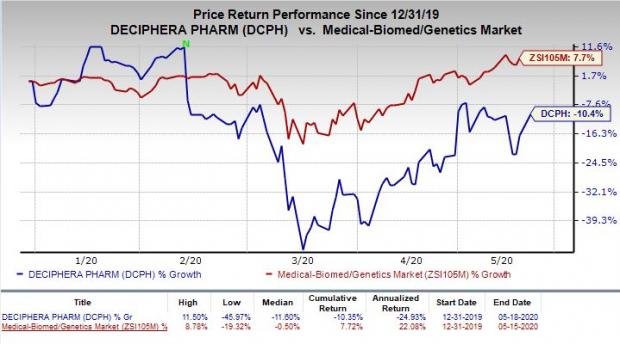 We note that the approval comes three months before the scheduled Prescription Drug User Fee Act (PDUFA) action date of Aug 13, 2020. The NDA for Qinlock was also granted Breakthrough Therapy and Fast Track designations as well as a priority review under the Real-Time Oncology Review pilot program of the FDA.

Per the company, this approval was based on the efficacy data from the pivotal phase III INVICTUS study as well as the combined safety results from INVICTUS and the phase I study on Qinlock in patients with advanced GIST. Outcomes of the study showed that treatment with Qinlock led to a median progression-free survival of 6.3 months compared to one month in the placebo arm. Findings also reflect a significant reduction in the risk of disease progression or death by 85%.

Moreover, Qinlock demonstrated a median overall survival of 15.1 months compared to 6.6 months in the placebo arm, thereby reducing the risk of death by 64%.

The company plans to launch the drug shortly in the United States.

Here's Why You Should Add Nasdaq (NDAQ) to Your Portfolio