The contract was awarded by the Naval Air Systems Command, Patuxent River, MD. Work related to the deal will be completed in Ft. Worth, TX, and is expected to get completed by September 2023.

The rise in global terrorism and adverse geopolitical situations has increased the need for enhancing the nation's defense budget, a major portion of which is allocated to combat aircraft. The F-35 program has been supported by an international team of leading aerospace majors, such as Northrop Grumman (NOC - Free Report) , BAE Systems (BAESY - Free Report) and Pratt & Whitney, a unit of Raytheon Technologies (RTX - Free Report) . Notably, Northrop Grumman rendered its expertise in carrier aircraft and low-observable stealth technology to this program. Also, BAE Systems’ short takeoff and vertical landing experience, and air systems sustainment supported the jet’s combat capabilities, while Pratt & Whitney offered its combat-proven engine to this jet.

Such important additions have enabled the F-35 jet to dominate the combat aircraft market, buoyed by solid demand as evident from the program’s frequent contract wins, both from Pentagon and other U.S. allies. For instance, in January, Lockheed Martin clinched a reimbursable contract worth $1.93 billion for providing a consortium of services involving the F-35 program.

Additionally, the company’s Aeronautics unit was able to deliver 22 F-35 jets during the first quarter of 2020. Considering its growing global stature, we expect this business segment to deliver impressive performance in the coming days as well.

The production of F-35 jets is expected to continue for many years, given the U.S. government's current inventory target of 2,456 aircraft for the Air Force, Marine Corps and Navy. Consequently, we expect Lockheed Martin to witness more order inflows for F-35, like the latest one, which in turn should bolster this defense contractor’s top line.

Furthermore, the fiscal 2021 defense budget proposal reflects a solid spending provision of $56.9 billion for missile aircraft. Interestingly, an amount of $11.4 billion has specifically been proposed for the F-35 program. If approved, such a stupendous budgetary amendment could reflect massive growth prospects for Lockheed Martin’s F-35 program in the days ahead.

Shares of this Zacks Rank #3 (Hold) company have gained 16.5% in the past year against the industry’s decline of 24.1%. You can see the complete list of today’s Zacks #1 Rank (Strong Buy) stocks here. 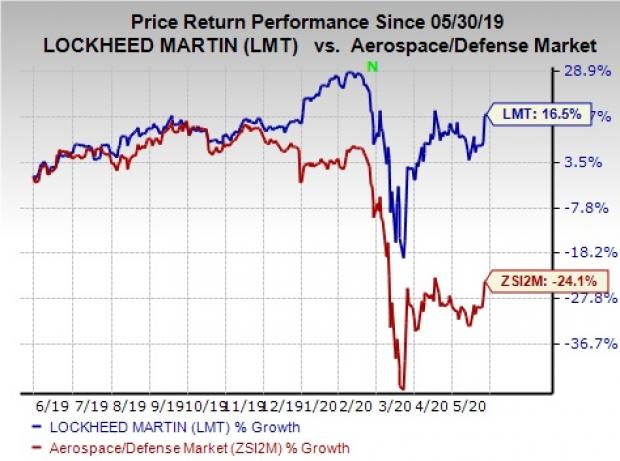 Is a Beat in the Cards for ProPetro (PUMP) in Q1 Earnings?