General Motors Company (GM - Free Report) plans to significantly increase production at several U.S. factories and reopen others, beginning today, which had been idled since mid-March amid the coronavirus outbreak, due to lower supply of pick-up trucks on dealer lots.

The company will resume manufacturing operations in the North American plants that manufacture pick-up trucks, such as the Chevrolet Silverado, at full capacity. It also plans to add a second shift of workers to the three factories in the United States and Canada today, which produce the popular line of crossover SUVs, including Chevrolet Equinox and GMC Acadia. General Motors will also begin the re-opening of five other U.S assembly plants on a single shift, including the Texas factory that builds large SUVs, such as the Chevrolet Silverado and Cadillac Escalade.

Plants in Michigan, Indiana and Missouri, which reopened on May 18, are likely to increase from one to three shifts from now on. While General Motors manufactures the Chevrolet Silverado and GMC Sierra pick-ups at its Michigan and Indiana plants, mid-size pick-ups, such as the Chevrolet Colorado and large vans, are produced in the Missouri plant. These plants were anticipated to increase production last week, which got delayed due to shortage of parts as some of its Mexico-based suppliers required more time to boost production. With this spike in demand, majority of General Motors’ 48,000 hourly employees are likely to be back at work by next week.

To keep workers safe, automakers have rolled out policies, which include keeping the staff at least 6 feet apart, sanitizing work areas and tracking employee temperature regularly. These companies have also installed plastic screens or partitions along assembly lines to isolate the staff, redesigned workspaces for less encounters and made wearing face masks or shields compulsory. Moreover, the automakers have revamped their lunch and break areas, developed new procedures for entering and exiting the facilities, and arranged testing protocols for coronavirus suspects.

Several industries as well as government officials are closely monitoring the reopening of plants to test whether social-distancing and coronavirus-safety protocols are preventing the spread of the virus.

General Motors currently carries a Zacks Rank #3 (Hold). Shares of the company have depreciated 29.3%, year to date, as against the industry’s rise of 22.2%. 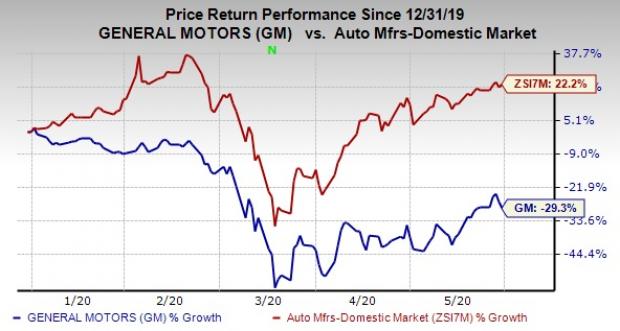 Shares of Tesla have appreciated 99.6%, year to date, compared with the industry’s rise of 22.2%.

Shares of Arcimoto have gained 41%, year to date, as against the industry’s decline of 16%.

Shares of Halfords have rallied 44.2%, year to date, as against the industry’s decline of 16%.