It’s been two weeks since the majority of the U.S. auto facilities have reopened after a two-month hiatus amid the coronavirus pandemic. However, the comeback has not been really smooth for some automakers, with full production being delayed or irregular, thanks to infected employees and supply chain challenges. Ford (F - Free Report) temporarily suspended production at the Kansas City assembly plant in Missouri on the Transit Van side after a worker tested positive for coronavirus. Honda and Toyota also put a brief pause on production to disinfect equipment, after a few of their workers got infected.

Meanwhile, Francevannounced an $8.8-billion aid package to revive the nation’s auto sector, which has been ripped apart by the coronavirus. Ramping up production and sales of electric vehicles is central to the plan.

1. AutoZone, Inc. (AZO - Free Report) reported earnings of $14.39 per share for third-quarter fiscal 2020 (ended May 9, 2020), down from the prior-year quarter figure of $15.99. The reported figure, however, surpassed the Zacks Consensus Estimate of $13.82 per share. In the fiscal third quarter, net sales slid 0.14% year over year to $2.78 billion. However, the top line surpassed the Zacks Consensus Estimate of $2.72 billion. Domestic commercial sales totaled $573.8 million, down from  $614.8 million recorded in the year-ago quarter. During the fiscal third quarter, AutoZone opened 21 stores in the United States, two in Mexico and none in Brazil.The total store count was 6,484 as of May 9, 2020. The company temporarily suspended the share-repurchase program on coronavirus scare. (AutoZone Q3 Earnings and Sales Top Estimates, Down Y/Y)

2. Nissan Motor Co. (NSANY - Free Report) announced fiscal 2019 results, wherein consolidated net revenues were 9,878.9 billion yen, down 14.6% year over year. The Japan-based auto biggie incurred a net loss of 671.2 billion yen, its first annual loss since 2009. This marks the company’s biggest loss in two decades. The downside was mainly due to the COVID-19 pandemic, which marred the company’s production, sales and other business activities across all regions. Members of the world's largest car-making alliance — Renault,  Nissan Motor and Mitsubishi Motors — announced several initiatives as part of a new business model of cooperation focused more on efficiency and competitiveness than on volumes.Nissan also announced plans to launch the production version of the company’s all-electric compact SUV battery-electric vehicle — Ariya — in July 2020, a few months ahead of its production and delivery dates. (Nissan Incurs Loss in FY19, Issues EV Ariya Update)

3. Dealing a blow to Volkswagen (VWAGY - Free Report) , Germany’s highest civil court ruled that the automaker must pay compensation to the buyer of one of its diesel minivans fitted with emissions-cheating software. The ruling marks the first real legal setback for the auto biggie in its home country. Per Reuters, the court has ordered Volkswagen to pay 25,600 euros, which is almost 6000 euros below the original purchase price. The ruling sets a precedent for 60,000 lawsuits that are still pending. With the company losing the landmark Dieselgate case, the court has allowed the claimants to return their vehicles for partial reimbursement of the purchase price. Volkswagen will offer a one-off payment to those affected as the firm is seeking quick and effective closure of the cases in agreement with the plaintiffs. (Volkswagen Dieselgate Update: Here's What You Should Know)

5. Fiat Chrysler Automobiles N.V.  is likely to be handed out 6.3 billion euro ($6.9 billion) in loans from Italy’s biggest retail bank, Intesa Sanpaolo, subject to the carmaker securing a state guarantee, which will cover 80% of the amount borrowed. Meanwhile, Fiat reopened two facilities in the central Mexican city of Toluca last week after a gradual restart of operations, with 40% of personnel in the northern city of Saltillo on May 25. The company idled operations in Mexico on Mar 19 due to coronavirus crisis. (Fiat to Secure $6.9B Loan From Intensa, Reopens Mexico Plants) 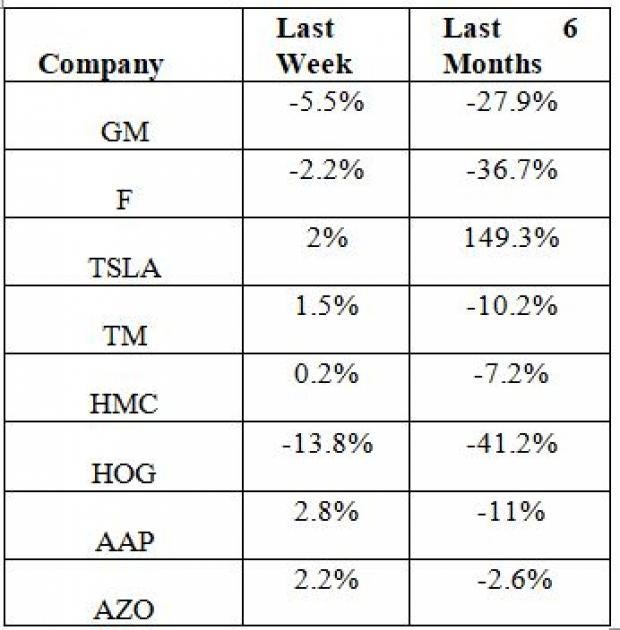 Watch out for further impact of the COVID-19 pandemic on the auto sector. Industry enthusiasts will closely track May 2020 U.S. car sales, which will be coming out very soon.