The contract was awarded by the Air Force Life Cycle Management Center, Robins Air Force Base, GA. Work related to the deal will be executed in El Segundo, CA; Forest, MS; and McKinney, TX and is expected to conclude by Dec 11, 2024.

The APG-82(V)1 AESA radar is the latest radar advancement for the U.S. Air Force F-15E fleet. It optimizes the F-15Es multirole mission capability. In addition to its extended range and improved multi-target track and precision engagement capabilities, the APG-82(V)1 offers improvement in system reliability over the legacy F-15E APG-70 radar.

Raytheon Technologies and Boeing have now shared more than 35 years of success on numerous generations of the F-15 radar program. This legacy, along with shared experiences on the F/A-18E/F and APG-79, ensures the AESA-equipped F-15E will remain a force multiplier for decades to come.

Against the backdrop of the heightening geopolitical uncertainties around the world, a number of developing countries have significantly increased their defense spending. This, in turn, has bolstered the demand for weaponries equipped with advanced technologies. As the United States is the leading weapon exporter, its defense contractors enjoy a dominant position in the defense space. Raytheon Technologies is notably one such contractor. It witnesses frequent flow of contracts from the Pentagon, as well as foreign allies of the United States for its various products.

Furthermore, the U.S. fiscal 2021 defense budget proposal provisions major war-fighting investments worth $56.9 billion for military aircraft. Such budgetary developments will benefit Raytheon Technologies in the upcoming period, in the form of contract acquisitions related to radar modernization and other associated services offered to combat jets. Such contracts will boost the company’s overall profit margin. Alongside Raytheon Technologies and Boeing, such a budget provision would also benefit other military aircraft makers like Lockheed Martin (LMT - Free Report) .

Earlier in April, Raytheon merged with United Technologies to form Raytheon Technologies, thus creating the world's most advanced aerospace and defense systems provider. The combined entity expects to introduce breakthrough technologies at an accelerated pace across high-value areas such as hypersonics, directed energy, avionics and cyber security in the days to come. The merger will evidently set a robust foundation for the new company in acquiring major contracts, similar to the latest one. 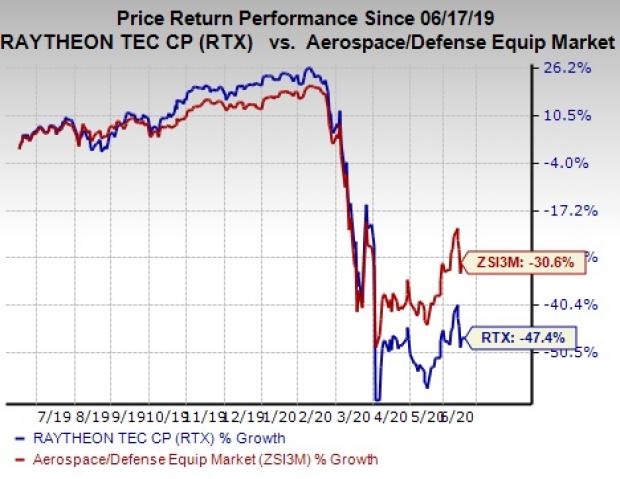 CAE delivered a positive earnings surprise of 3.48%, on average, in the trailing four quarters. The company has a long-term earnings growth rate of 8%.