In the past week, American Airlines (AAL - Free Report) grabbed headlines following the announcement that it hopes to reduce its cash burn rate to zero by Dec 31, 2020. Notably, the carrier was also in news in the previous week when it issued a bullish update on July capacity.

1. American Airlines predicts second-quarter 2020 revenues to tank approximately 90% year over year. Capacity in the period is expected to plummet roughly 75% year over year. However, owing to the recent improvement in air-travel demand alongside cost-cutting initiatives, the Zacks Rank #3 (Hold) projects cash-burn rate to fall to nearly $40 million per day in June from $100 million in April. You can see the complete list of today’s Zacks #1 Rank (Strong Buy) stocks here.

2 Like American Airlines, Delta hopes to reduce its average daily cash outflow to zero by 2020-end. Moreover, this Atlanta, GA-based carrier envisions the demand-recovery environment to be better on the domestic front than in the international markets. As a result, the carrier added 100 domestic flights in June. Moreover, it plans to continue adding flights in the third quarter.

3. Backed by its focus on operating cargo-only flights as passenger revenues decline in the current scenario, United Airlines expects cargo revenues to surge more than 30% year over year in the June quarter. Additionally, owing to its cost-cutting measures, this Chicago-based carrier expects second-quarter operating expenses to decrease 53% year over year. Moreover, second-quarter average daily cash-burn amount is expected to be at the lower end of the $40-$45 million guided range. In the third quarter, the same is forecast at almost $30 million per day. The company is focused on achieving capital expenditure savings of more than $2.5 billion for the full year, which will lower its capital budget to below $4.5 billion. Moreover, United Airlines expects to end the third quarter of 2020 with total liquidity worth $17 billion.

4. Driven by its cost-controlling initiatives, Ryanair reduced its average weekly cash-burn rate to around €60 million in May from approximately €200 million in March. Additionally, the carrier expects to rebound from a forgettable fiscal 2021 to be profitable in fiscal 2022. However, O’Leary said that “Everything will depend on how people will fly between September and March and that there is no second-wave outbreak”. 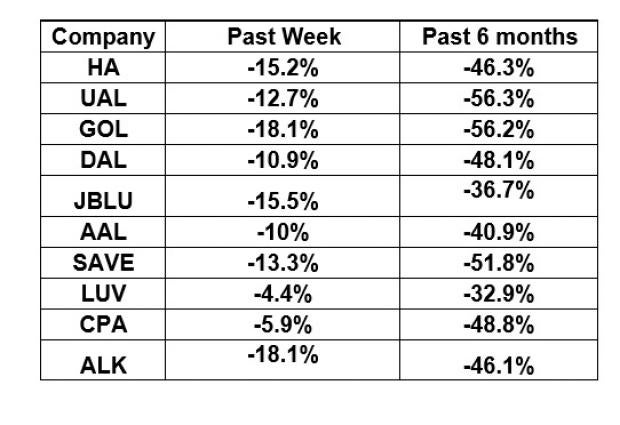 Investors will keenly wait and watch for further coronavirus-related updates and their impact on air travel.