Cimpress’ chief executive officer, Robert Keane, communicated that the company anticipates undergoing a long and uneven recovery phase from the adverse impacts of the pandemic. However, it noted that its latest revenue and profit trends have been better than what it earlier expected.

Earlier, the company stated that in April 2020, bookings in its Vistaprint segment witnessed a decline of 51% on a year-over-year basis, while that for the Upload and Print segment fell 57%. Also, bookings in the National Pen segment and All Other segment declined 65% and 6%, respectively. Notably, this led to a decline in the company’s consolidated bookings for April by 51% year over year.

However, it also noted that bookings in all segments started to show signs of improvement from the second half of April compared to the first half, which continued throughout May 2020. For May, bookings in the Vistaprint segment decreased 18% year over year, while that for the Upload and Print segment fell 40%. Bookings in the National Pen segment recorded a decline of 43%, whereas the same for the All Other segment increased 24%. Notably, the company’s consolidated bookings for May decreased 25% year over year, narrower than the previous month’s decline. For a couple of weeks ended on Jun 13, 2020, the consolidated bookings recorded a decline of about 24% (on average) on a year-over-year basis.

Notably, Cimpress stated that the latest trend highlights the outcome of its change in focus to products and product content templates, and the impacts of ongoing relaxation of government restrictions in certain end markets.

The company also stated that it has been continuing its variable and fixed cost-management initiatives. In addition, it stated that its current liquidity level (including available cash and credit facility) stays almost at the same level recorded at the end of March 2020.

Cimpress, with a $2-billion market capitalization, currently carries a Zacks Rank #3 (Hold). In the past three months, the company’s share price has increased 33.5% compared with the industry’s growth of 32%. 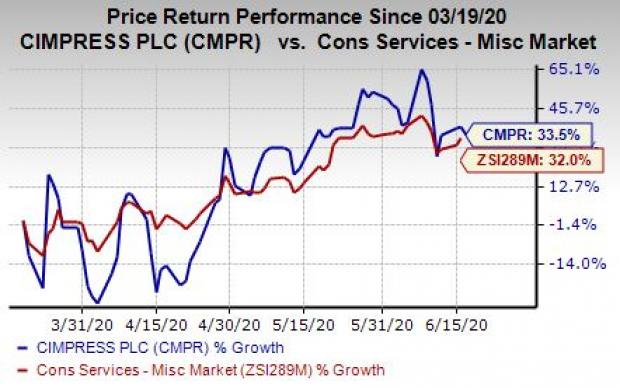 Activision Blizzard delivered a positive earnings surprise of 31.34%, on average, in the trailing four quarters.

Brunswick delivered a positive earnings surprise of 8.42%, on average, in the trailing four quarters.