Tesla, Inc. (TSLA - Free Report) has entered into a three-year deal with Panasonic Corp. (PCRFY - Free Report) , per which the Japanese battery maker will manufacture and supply 2170 lithium-ion battery cells at its Gigafactory in Nevada.

The deal, effective Apr 1, 2020, through Mar 31, 2023, covers the terms of Panasonic’s production capacity commitments and Tesla’s purchase volume commitments for the first two years of the agreement. Tesla has also amended the terms and conditions of its partnership with Panasonic, modifying the term to expire 10 years after the latter reaches certain production milestones.

Tesla and Panasonic entered into discussions in May to start expanding the production facility for batteries and powertrains in Nevada. The two companies saw an advantage in expanding the plant owing to the increased demand for Tesla's electric vehicles.

In February, Tesla and Panasonic ended their joint production of solar cells at the Buffalo, NY-based Gigafactory 2 facility of the former, after struggling for years to boost the unit output. The companies had formed the joint venture in 2016 to manufacture solar cells. Per the deal, Panasonic had initially agreed to pay $271.96 million for part of the equipment at the Buffalo plant, following which the companies commenced producing components for solar photovoltaics in 2017.

Last November, Tesla’s relationship with Panasonic hit a rough patch, after the latter denied any plan to set up a new battery cell factory for the former in China. It also suggested that Tesla could either access battery cells from Gigafactory 1 in the United States, where Panasonic is the exclusive supplier, or can simply use cells produced in China by other manufacturers. Notably, Tesla has signed an agreement with South Korea’s LG Chem Ltd. to source batteries for its Gigafactory 3 in China, which provides the company with 21700 type battery cells used in its Model 3 and Model Y cars.

Meanwhile, Tesla appears to be facing major production issues with the current Model Y, that consumers in the United States are reluctant to purchase the battery-electric SUV and in some cases, refusing deliveries as well. The defects reportedly cover a variety of areas, including paint and trim issues, seat indentations and a loose seat belt.

While Elon Musk, CEO of Tesla, has directed the firm to redouble its efforts to identify and repair faults as cars come off its Fremont's assembly line, some are still being shipped with major defects.

The company currently expects second-quarter 2020 production of 83,177 vehicles, including Models S, 3, X and Y, suggesting a decline from the first-quarter figure of more than 102,000 vehicles. The more Model Y’s get returned, rejected, or recalled, the worse this quarter could go for Tesla.

Tesla currently carries a Zacks Rank #2 (Buy). Shares of the company have appreciated 137.1%, year to date, compared with the industry’s rise of 39.1%. 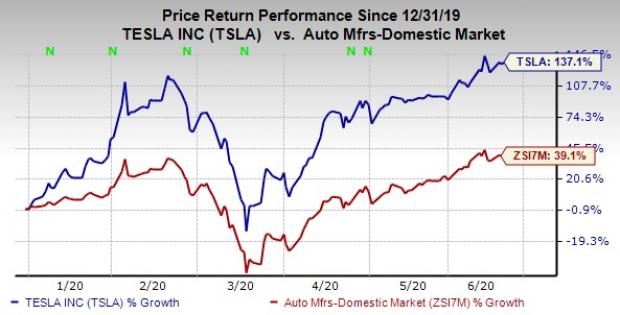 Other top-ranked stocks in the same sector are Halfords Group Plc (HLFDY - Free Report) and Niu Technologies (NIU - Free Report) , both carrying a Zack Rank of 2 at present. You can see the complete list of today’s Zacks #1 (Strong Buy) Rank stocks here.

Shares of Halfords have gained 5.8%, year to date, as against its industry’s decline of 12.6%.

Here's Why You Should Hold on to Centennial Resource Now