The coronavirus outbreak has affected most industries across the globe. However, the technology sector has remained relatively resilient due to its long-term prospects, courtesy of 5G, AI, blockchain, cloud computing and autonomous driving.

The coronavirus situation is now expected to hasten the adoption of driverless vehicles to pick up passengers, transport goods and others.

Although self-driving vehicles and delivery robots may mitigate the risk of spreading infection, stalwarts like Alphabet’s (GOOGL - Free Report) Waymo and KiwiBot are conducting thorough sanitation as an extra measure for maximum safety.

Autonomous vehicles have already started to ply on the roads of China, being utilized to sterilize hospitals, deliver groceries, dispatch medical aids and deliver food to people in isolation due to the infection. Notably, Baidu (BIDU - Free Report) has released 104 driverless vehicles in 17 cities across China, to safely carry out frontline work.

A report from Allied Market Research says that it expects the autonomous vehicle market to witness a CAGR of 39.47% between 2019 and 2026 and reach $556.67 billion. Further, a Market Data Forecast report indicates that the self-driving cars market is expected to hit $56.21 billion in 2020 and reach $220.44 billion by 2025, at a CAGR of 36.5%. These forecasts bode well for players in the core as well as related industries. 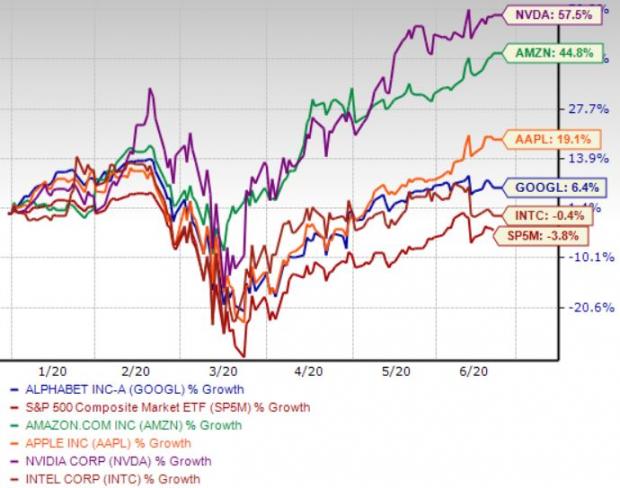 Alphabet’s growing self-driving initiatives are expected to intensify competition for other tech majors working to eke out a niche in the autonomous driving space. Notably, Waymo recently raised $2.25 billion in funding from investors, including Silver Lake Management, Canada Pension Plan Investment Board and Magna International, for the first time. The latest funding is likely to aid this Zacks Rank #3 (Hold) company in commercializing Waymo vehicles and thereby expanding self-driving presence into new areas.

Meanwhile, Amazon has invested in Aurora, a startup that develops technology to power fully-autonomous vehicles. The company currently carries a Zacks Rank #3.

Automotive chipmakers are also solidifying their presence in the autonomous vehicle industry.

Further, its partnership with Uber, Volkswagen and Baidu are noteworthy in the autonomous driving space.

3 Payments Stocks to Gain From Rise in Digital Payments