Importance of the E-2D Advanced Hawkeye

The Hawkeye is an airborne, all-weather, tactical, early-warning aircraft used by the U.S. Navy. The E-2D is the fourth version of the E-2 Hawkeye. Notably, the E-2D Advanced Hawkeye has a structurally distinctive design — a rotating rotodome and four vertical stabilizer tail configurations — which provides 360-degree surveillance at all times. These technologies increase this aircraft’s visibility of far away targets. Alongside the U.S. Navy, this aircraft is deployed by the Egyptian Air Force, French Navy, Japan Air Self-Defense Force and Mexican Navy.

In the backdrop of the heightening geopolitical uncertainties around the world, several developing countries have significantly increased their defense spending. The increase in defense spending can also be attributed to advancements and integration of new tactical and logistical features, equipment and other services. Notably, in order to increase the popularity of the Hawkeye aircraft program and keep acquiring regular contracts, Northrop Grumman has been making efforts in consistently keeping its aircraft updated. The latest contract awarded by the company is a testament to that.

Looking ahead, the U.S. fiscal 2021 defense budget proposal provisions for investments worth $56.9 billion for military aircraft. Such budgetary developments will benefit Northrop Grumman in the upcoming period, in the form of contract acquisitions related to its E-2D Advanced Hawkeye and other aircraft programs. Moreover, this will support other defense makers like CPI Aerostructures involved in developing equipment and kits for the Hawkeye aircraft.

Shares of this Zacks Rank #3 (Hold) company have declined 3% in the past twelve months compared with the industry’s fall of 27.4. You can see the complete list of today’s Zacks #1 Rank (Strong Buy) stocks here. 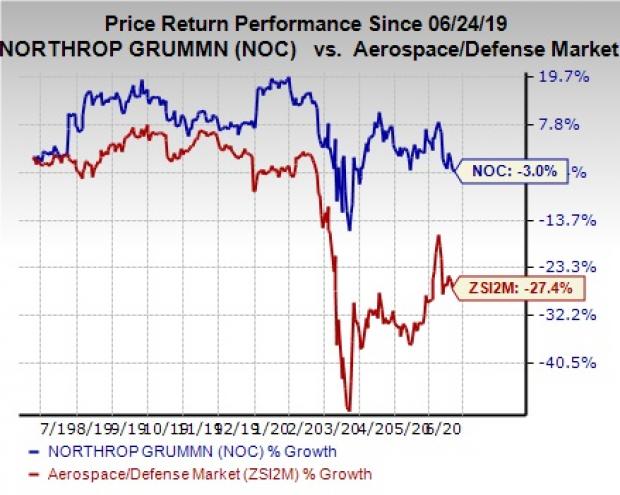 Market Recovery to Be Like "Rolling W's"? Value Stocks to Buy