Microsoft (MSFT - Free Report) recently announced that it is set to acquire CyberX, in an effort to integrate Azure IoT portfolio with security capabilities. However, the terms of the deal have been kept under wraps.

Per a TechCrunch report, the deal is touted to be near $165 million. Per Crunchbase data, the venture-capital backed startup has raised approximately $47 million in funding.

The security startup is engaged in identifying, stopping, and predicting security breaches on IoT devices, and enhancing the infrastructure of IoT networks of industrial organizations.

With improved visibility on IoT device networks, customers will be able to manage security of existing IoT devices (often dubbed as “brownfield devices”), which otherwise had been a difficult task due to numerous custom protocols.

Industrial organizations will therefore be able to ensure smart manufacturing and smart grid in a secure infrastructure. This, in turn, will accelerate digitization of production facilities and broader supply chain.

Microsoft will also leverage the capabilities of CyberX across its broader portfolio of IoT security offerings to enhance threat protection, among others.

Quoting an instance, the company stated that integration of CyberX with Azure Sentinel will now aid Microsoft’s SecOps personnel to detect threats across Operational Technology- and IT-converged networks, which was previously an uphill task.

This is expected to bolster revenues in the quarters ahead and instill investor optimism in the stock, which currently carries a Zacks Rank #3 (Hold). You can see the complete list of today’s Zacks #1 Rank (Strong Buy) stocks here. 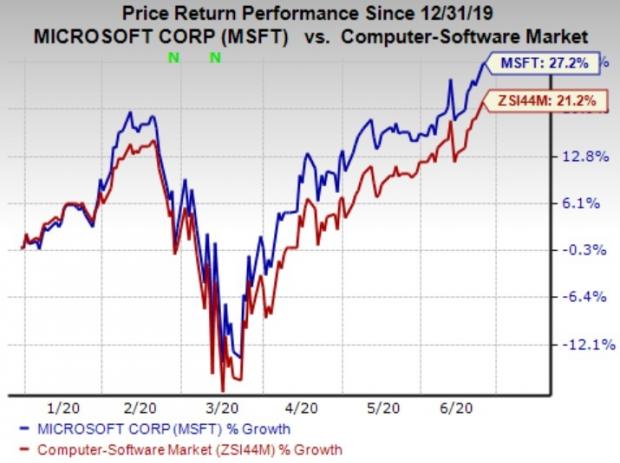 Notably, shares of the company have returned 27.2% in the year-to-date period compared with the industry’s rally of 21.2%.

Microsoft has been making concerted efforts to democratize the benefits of IoT. In April 2018, the company announced investment of “$5 billion in IoT and the intelligent edge over the next four years.”

The tech giant is increasingly focusing on security of IoT devices with an aim to aid industrial organizations accelerate asset operations in a secured infrastructure and boost business outcomes.

CyberX acquisition is in sync with the company’s goal of simplifying IoT and making securing IoT devices a seamless task.

Notably, per MarketsandMarkets data, IoT security market is envisioned to hit $35.2 billion by 2023, at a CAGR of 33.7% during 2018-2023. The projection favors Microsoft’s prospects over the longer haul.