Ford Motor Company (F - Free Report) recently unveiled the latest edition of the F-150 pickup, which will be equipped with a hybrid V6 powertrain, available at any trim level from the F-150 XL to F-150 Limited, along with internet access, and a redesigned interior that makes the truck into more of a rolling office or even a nap room.

Ford made a bet on America's top-selling vehicle six years ago, rolling out a radical version of the F-Series pick-up, with a lighter aluminum body, rather than the usual steel. The all-new F-150, now in its 14th generation, will have more towing and payload capacity, torque, horsepower as well as luxury.

New F-150 users will find exterior redesigns that include revamped headlamps, wrap-around bumpers and a new power dome hood. The new cab and active grille shutters are both helping reduce drag and boost fuel efficiency. However, the internal combustion engines and transmissions remain the same.

Ford has paid particular attention to the interior, updating the materials inside the vehicle, and adding a 12-inch center panel to XLT high-series models and above. It has seats that recline up to almost 180 degrees, and onboard generators, an integrated power source, free-up cargo space and can charge a full bunk of electric dirt bikes.

Reportedly, the new F-150 will be manufactured at Ford's Dearborn and Kansas City plants. The pricing, power and fuel economy ratings will be announced in the coming months. The company is on schedule to supply the trucks this fall to the distributors, with the production only minimally affected by the coronavirus outbreak. The next move for the F-150 will be going hybrid, but not until 2022.

Ford currently carries a Zacks Rank #3 (Hold). Shares of the company have depreciated 36.5%, year to date, as against the industry’s rise of 32.4%. 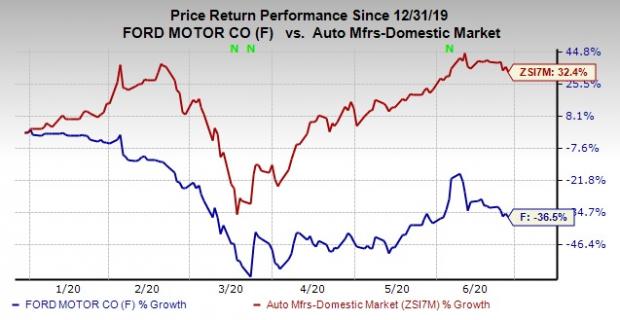 Shares of AngloGold have rallied 28.2%, year to date, compared with the industry’s gain of 23.9%.