Microsoft (MSFT - Free Report) recently announced that it will permanently shut down all brick-and-mortar Microsoft Stores. The company operated more than 80 Microsoft Stores spread across the United States, Canada, Australia, Puerto Rico, and the U.K.

The company anticipates this move to result in a pre-tax charge, pertaining to asset write-offs and impairments, of nearly $450 million or 5 cents per share, which will be accounted for, in the fourth quarter of fiscal 2020, ending Jun 30, 2020.

Notably, the Microsoft Store locations are closed since late March owing to the COVID-19 outbreak. During this period, the company’s retail team has enabled customers to digitally transform via virtual training workshops.

There will be no layoffs. With the shutting down of physical stores, the retail team will “continue to serve customers from Microsoft corporate facilities and remotely providing sales, training, and support.”

As part of its digital overhaul of retail strategy, the company will invest in online portals on Microsoft.com, and stores in Windows and Xbox. Notably, these online portals serve 1.2 billion customers on a monthly basis across 190 markets according to Microsoft. The company intends to remodel its Store locations across London, NYC, Sydney, and Redmond into “Microsoft Experience Centers.”

Although the latest move is likely to hurt bottom line in the near term, it bodes well for the financial performance in the longer haul, as the decision is likely to free up resources for Microsoft, which can be reinvested in other profitable ventures. 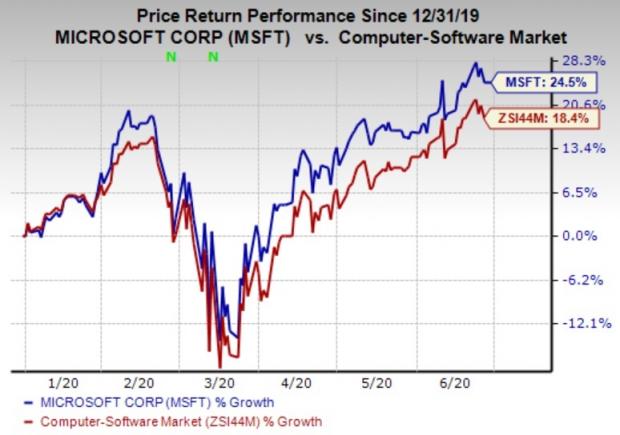 This, in turn, is expected to instill investor optimism in the stock in the days ahead. Notably, shares of the company have returned 24.5% in the year-to-date period compared with the industry’s rally of 18.4%.

Coronavirus crisis-induced lockdowns have spurred digital sales and have given a go-to-alternative to physical retail outlets, in general. Hence, Microsoft’s strategy to rethink its physical retail presence makes sense.

However, the closure of retail stores is likely to weigh on revenues from Surface devices as customers have a tendency of buying devices like laptops after checking them out physically at stores.

Moreover, the latest strategy is also being viewed as acceding to Apple’s (AAPL - Free Report) brick-and-mortar outlets. Microsoft Stores are supposed to have mirrored Apple Stores and were also opened in close proximity to generate competitive sales. However, Apple’s retail sales reportedly lead considering revenue per square foot data, and Microsoft could not match up to the success of Apple stores.

Markedly, in fiscal 2019, Apple generated 31% of total revenues from its physical retail outlets and online stores and direct sales force. Nevertheless, there is no revenue breakup on revenue contribution from around 500 physical stores specifically but it is believed to be substantial.

Meanwhile, there is no specific data pertaining to contribution of sales from Microsoft’s physical and online stores. Per an analyst quoted by MarketWatch, “the amount of revenue from retail stores is probably about 2%” of Microsoft’s total consumer sales.

Long-term earnings growth rate for Fortinet and Mercury Systems is pegged at 14% and 15.72%, respectively.