BP to Divest Petrochemicals Business to INEOS for $5 Billion

BP plc (BP - Free Report) recently agreed to divest the global petrochemicals business to a privately-owned U.K. multinational chemicals company, INEOS. This will be a massive step toward strengthening its finances. BP is expected to receive $5 billion through this divestment.

The company’s petrochemicals business has two sub parts, aromatics and acetyls. The business has 14 manufacturing facilities that are strategically located in the United States, Europe and Asia, which employ more than 1,700 personnel all over the world. Last year, the company produced 9.7 million tons of petrochemicals. The deal provides INEOS with the option of acquiring BP’s Naperville research complex in Illinois for additional consideration. However, BP’s petrochemicals assets at Gelsenkirchen and Mulheim in Germany are excluded from the divestment, which is expected to be completed by the end of this year.

Notably, INEOS had acquired BP’s subsidiary Innovene in 2005 for $9 billion. The transaction included two refineries and the majority of BP’s the then chemical assets. Markedly, the recent move is expected to further strengthen the relationship between the two companies.

BP, which is working toward shifting to low-carbon energy, reached the $15-billion divestment target a year ahead of schedule through the asset sale. Earlier, the company was scheduled to reach the goal by mid-2021.

Moreover, the deal is expected to strengthen its balance sheet. Notably, its exposure to debt increased significantly in first-quarter 2020. The company’s gearing was recorded at 36.2%, up from 31.1% in the December quarter of 2019. Net debt was recorded at $51,404 million, up 13.1% from $45,442 million in the prior quarter. Importantly, BP’s cash and cash equivalents were $18,139 million at first quarter-end.

The divestment comes at a time when other energy majors like Exxon Mobil Corporation (XOM - Free Report) and Royal Dutch Shell plc (RDS.A - Free Report) are investing in petrochemicals, which is considered to be a major growth driver for oil demand in the long term. However, Steve Jenkins of Wood Mackenzie said that the “chemicals businesses are struggling with overcapacity”. Moreover, raising large amount of cash during the current market volatility might help the company to shield dividend payments.

BP’s shares have lost 3.6% from the beginning of the second quarter against the 4.6% rise of the industry it belongs to. 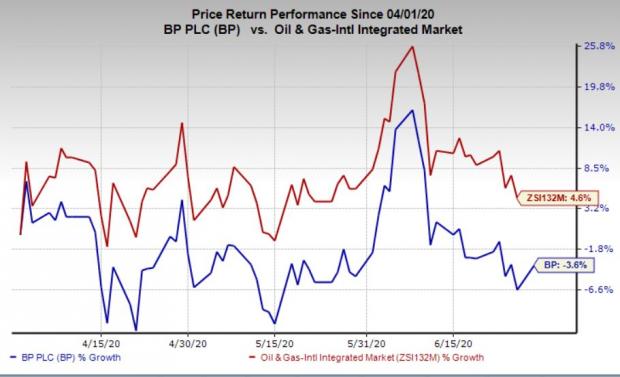 Over the last 60 days, seven analysts have increased Chevron’s earnings estimates for the current year, while none have revised the same downward. Thus, the Zacks Consensus Estimate for the current year has been revised from a loss of 63 cents per share to earnings of 27 cents in the same period.

Ollie's Bargain (OLLI) Marches Ahead of Industry: Here's Why