Pioneer Natural Resources Company (PXD - Free Report) is well poised to grow on the back of strength in the Permian, a ‘super basin’. However, weak realized commodity prices remain a concern for now.

The Irving, TX-based oil and gas exploration & production company — with a market cap of $15.6 billion — has an expected earnings growth rate of 8.3% for the next five years. Pioneer Natural beat earnings estimates thrice and missed just once in the last four quarters, with average positive surprise of 7.1%. Its 2020 earnings per share estimates of $1.47 have witnessed five upward revisions but no downward movement in the past 30 days.

The company’s shares have gained 39.4% since the beginning of the second quarter compared with 54.6% rise of the industry it belongs to. 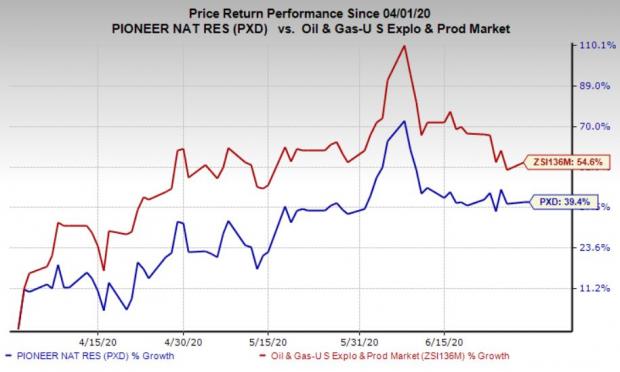 Strong Permian Footprint: Pioneer Natural is a pure-play Permian basin — the most prolific oil resource in the United States — producer. In the Midland basin, the company has the largest acreage position with operations across 680,000 net acres of land. In the prolific basin, Pioneer Natural has identified more than 20,000 drilling sites that are likely to provide the company with decades of crude production. It has roughly 10 more years of drilling inventory in the region, where it can keep producing without a deceleration in the current output pace. Moreover, given its acreages in the prolific basin, the company does not have to turn to less productive sites.

Balance Sheet Strength: At the end of first-quarter 2020, cash balance totaled $784 million. Long-term debt summed $2,140 million, reflecting a debt to capitalization of 17.8%. The upstream energy player’s debt to capitalization has been persistently lower than the industry over the past few years, reflecting considerably lower debt exposure. Despite an unfavorable business scenario owing to coronavirus-induced dented energy demand, the company is capable of clearing long-term debt with its cash balance and $1.6 billion of credit facilities. Low leverage positions it well ahead of peers to emerge from the downturn.

Increasing Efficiencies: It revised 2020 capital budget to the band of $1.4-$1.6 billion, representing a decline of roughly 55% from the initial spending budget. Still, for 2020, Pioneer Natural’s revised oil equivalent production volumes guidance is projected within 341-359 thousand barrels of oil equivalent per day (MBoe/d). The midpoint of the range suggests an improvement from the 2019 figure of 345.5 MBoe/d. Thus, despite lower capital spending, the upstream energy firm is expected to see increased production volumes in 2020 on strong operational efficiencies.

Downside Protection: Pioneer Natural’s revised oil production volumes for 2020 are expected in the range of 198-208 MBbl/d. Notably, more than 80% of the company’s estimated oil output for the last three quarters of 2020 will be backed by crude oil hedges. This will likely offer the upstream energy player with significant downside protection.

There are a few factors that are holding back the stock from reaching true potential.

Low Demand: The coronavirus pandemic has dented global energy demand, prompting crude oil to trade in the bearish territory. Since crude accounts for the majority of Pioneer Natural’s production, weak commodity prices are affecting the company’s upstream business. Lower realized prices of commodities hurt its earnings in the March quarter of 2020, which declined to $1.15 from the year-ago quarter’s $1.83. Moreover, its gross trailing 12-month margin is the lowest among peers. The recent profit trend is unlikely to recover anytime soon since the business scenario is not favorable.

Increasing Costs: In the June quarter of 2020, Pioneer Natural expects production costs in the range of $6.50-$8.00 per BOE, suggesting an increase from $5.17 in the prior quarter. Moreover, the upper limit of the projected depreciation, depletion and amortization expenses of $12.50-$14.50 per BOE range indicates an increase from $12.71 in the first quarter. Rising costs will hurt the company’s profit levels.

Despite significant prospects, rising production costs and low oil prices are affecting Pioneer Natural. Nevertheless, we believe that systematic and strategic plan of action will drive its long-term growth.