After witnessing the enormous success from Orbi WiFi 6 AX6000 Tri-band Mesh System (RBK852), NETGEAR, Inc. (NTGR - Free Report) announced the launch of the new entrant, Orbi WiFi 6 AX4200 Tri-band Mesh Systems (RBK752/753). The  newest addition to the Orbi Mesh System comes with a two and three pack router and satellite system that offers consistent WiFi coverage to large-sized homes spanning over an area of up to 5,000 square feet. This is likely to make the Orbi technology more accessible to a broader spectrum of audience by catering to the WiFi needs of almost every household.

Earlier this year, NETGEAR announced the addition of Orbi 4G LTE WiFi Router to its Orbi portfolio. This high-tech router had been specifically designed to provide uninterrupted WiFi connection with speeds up to 1.2 Gbps and coverage of up to 2,000 square feet. Its expandable mesh architecture is compatible with Orbi AC satellites, which facilitates consistent and flawless 4K streaming and gaming applications. Backed by a robust cellular network, the WiFi router is compatible with major 4G LTE service providers.

NETGEAR’s top line is benefiting from rapid surge in Internet-connected devices, thereby boosting the need for robust networking solutions. An increased market demand for Smart Home and connected products such as Smart TVs, game consoles, HD streaming players and security cameras, among others, continues to drive innovation in the networking space. In addition, the company is gaining from the healthy market traction of Orbi, cable modems and gateways coupled with its SMB switching portfolio, particularly the PoE and ProAV switches. It continues to capitalize on technology inflections, create new categories and build recurring revenues to maintain its market position and drive future growth. The latest addition to the Orbi portfolio is likely to strengthen its market position and further augment revenues in the near term.

Shares of NETGEAR have inched up 1.7% against the industry’s decline of 16.2% in the past year. Driven by healthy momentum in the Connected Home segment, NETGEAR topped earnings estimates in each of the last four quarters. The company has a trailing four-quarter positive earnings surprise of 13.1%, on average. 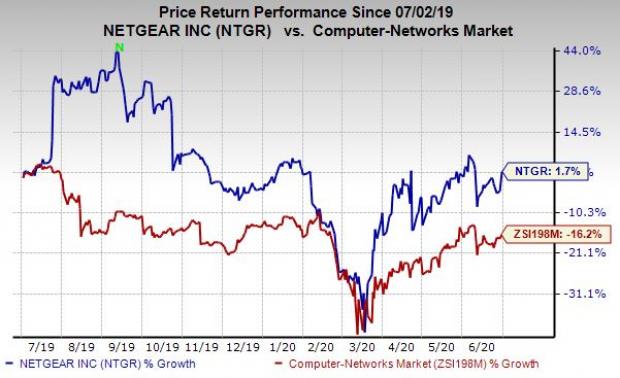 Calix’s bottom line surpassed the Zacks Consensus Estimate in the last four quarters. The company has a trailing four-quarter positive earnings surprise of 43%, on average.