Cummins (CMI - Free Report) is a historic American powerhouse that makes engines and much more. The company is also expanding its New Power segment as it prepares for the broader clean energy push.

Cummins stock has already benefited from the economic comeback, alongside other cyclical areas. And its outlook appears strong after it topped our first quarter estimates in early May and raised its guidance.

Wall Street more recently has taken notice of the Indiana-based firm’s ability to help drive a cleaner energy future. These efforts include CMI’s hydrogen fuel cell technology. Cummins and other more niche green energy companies have gained traction in what has turned into a widely popular area within the renewable energy sector that could gain more steam.

Hydrogen is the simplest and most abundant element in the universe. Cummins currently “uses fuel cell and hydrogen technologies to power a variety of applications, including transit buses, semi-trucks, delivery trucks, and passenger trains to name a few.” 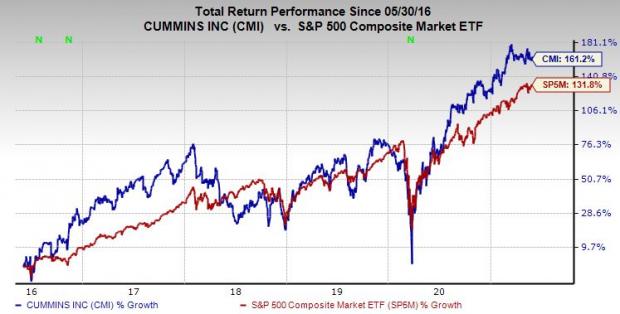 The company is genuinely committed to evolving within the quickly changing world where every major automaker from Ford (F - Free Report) to Volkswagen is diving headfirst into the EV space to chase Tesla (TSLA - Free Report) . Plus, CMI stands to benefit from any infrastructure spending bill that might be passed.

More importantly, outside of any possible government spending boost, market forces and government incentives/regulation appear to be pushing the larger manufacturing, automotive, and industrial sectors to transition further and faster to cleaner alternatives. “Cummins is committed to ensuring our customers have the right solution anywhere and everywhere our customers operate by offering them a broad range of power solutions from advanced diesel, near zero natural gas, fully electric hydrogen, and other technologies,” CEO Tom Linebarger said on the companies first quarter earnings call.

“These relationships coupled with our application expertise in broad sales and service channel will position us well to manage the transition from internal combustion engines to lower carbon hybrids and eventually to zero emissions products in the future.”

Cummins is coming off a great start to 2021 after it topped Q1 estimates on May 4, with revenue up 22% against the easy-to-compare period last year. CMI beat our adjusted ESP estimate by 16%, with its average beat over the trailing four quarters at 54%. And the company announced a global strategic partnership with Daimler to “provide medium duty powertrain systems for Daimler Trucks and Buses.”

More specifically, its engine unit popped 14%, with a 10% jump in North America and 24% international expansion. Meanwhile, Components revenue jumped 43%, with Power Systems sales 16% higher. And its still very small New Power business soared 250%, driven by “greater demand in transit and school bus markets in addition to the commissioning of electrolyzer projects and shipments of fuel cell systems to the rail market.”

The company raised its fiscal 2021 guidance for revenue and profitability on the back of “stronger demand across all markets.” CMI’s new outlook calls for sales to climb between 20% to 24%, up from its previous guidance of 8% to 12%.

Zacks Estimates currently project CMI’s revenue will jump 20.5% this year to reach $24.1 billion to climb above its pre-pandemic total in FY19 of $23.6 billion. Peeking ahead, the firm’s FY22 sales are projected to jump over 6% higher to $25.6 billion.

At the bottom end, its adjusted earnings are projected to climb by 33% in 2021 and another 16% in FY22. The nearby chart also showcases how much Cummins overall earnings outlook has improved.

At around $257 a share CMI trades 7% below its mid-March records and it sits below neutral RSI levels (50) at 46 right now, which gives the stock potential runway. The stock also trades at a 15% discount to its own year-long median and 30% against its highs at 15.3X forward 12-month earnings. This also comes in well below its Zacks econ sector’s 21.8X average.

Cummins positive post-release earnings revisions help it land a Zacks Rank #1 (Strong Buy) at the moment, alongside an “A” grade for Momentum and a “B” for Growth in our Style Scores system. And its 2.1% dividend yield tops the 10-year U.S. Treasury’s 1.58% and Caterpillar’s (CAT - Free Report) 1.71%.

Plus, CMI executives plan to return 75% of operating cash to shareholders in the form of dividends and share repurchases in 2021, which would mark a substantial increase from last year’s 52%.