Bull of the Day: Nike (NKE)

Nike (NKE - Free Report) stock has outpaced its broader industry in 2019 and it looks poised to continue to expand around the globe and in North America even as it faces more formidable challenges from Adidas (ADDYY - Free Report) and red-hot upstart Lululemon (LULU - Free Report) .

Nike is the world’s largest sportswear retailer and it is likely to remain at the top of the heap for a variety of reasons. The first, and most important, is that Nike has remained at the forefront of the biggest sports on the planet, from the NFL in the U.S. to international soccer and the Olympics. For as much as this might not seem to matter, why would people be willing to pay $150 or more for running shoes if they aren’t trusted by the world’s top athletes?

On top of that, Nike has become more entrenched as a cultural and fashion icon than ever before. Nike has helped create and tapped into the mainstream adoption of the larger streetwear and athleisure movement.

Nike also hasn’t forsaken brick and mortar. Instead, NKE has remodeled and modernized stores and remains committed to a major, cutting edge presence in global hubs from New York to Tokyo. And like everyone else in retail, from from Target (TGT - Free Report) to Gap (GPS - Free Report) , NKE has spent the last several years bolstering its digital and direct-to-consumer push. 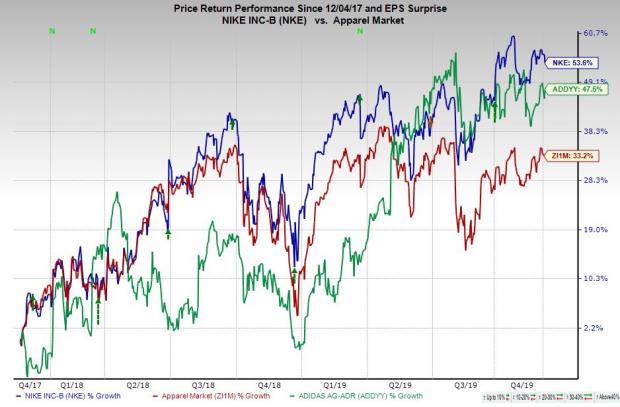 Nike has also improved its supply chain to focus on digital and analytics, which includes the introduction of RFID tags into products. Nike also purchased Celect, which is billed as a “retail predictive analytics and demand sensing” firm, in August as part of its larger Consumer Direct Offense strategy.

Investors will see that Nike stock has outpaced Adidas over the last two years, up 54% against 48%. This, however, is not the case during the past five years, with ADDYY up a whopping 315% vs. NKE’s 86%. The stock price growth disparity between Adidas and Nike remains in 2019—they are now closer to neck and neck for the decade, with Nike up 20% higher.

Nonetheless, Nike shares have jumped 25% this year, compared to the Apparel Market’s 19% average climb and the S&P 500’s 23%. NKE stock closed regular trading Tuesday at roughly $92.50 per share, just a few dollars off its 52-week highs.

Meanwhile, NKE is trading at 28.9X forward 12-month Zacks earnings estimates. This comes in above its three-year median of 26.2X but below its 32.4X high during this stretch. To help offset some of the valuation concerns, Nike executives did announce in mid-November that they raised the firm’s quarterly cash dividend by 11%.

The firm currently pays a yield of 1.05%, which top’s Adidas’ 0.88%. The company is also in the midst of a four-year $15 billion share repurchase program that was announced in 2018.

Nike’s second-quarter fiscal 2020 revenue is projected to jump 7.5% from the year-ago period to $10.08 billion. This would top last quarter’s 7% expansion.

Nike CEO Mark Parker projects that his firm’s digital division will make up 30% of Nike’s total business by 2023, compared to roughly 15% now. This helps demonstrate how effectively Nike has adapted to the Amazon (AMZN - Free Report) age.

In fact, Nike recently decided to effectively cut ties with the e-commerce giant as it focuses almost entirely on its own higher-margin direct-to-consumer business—aside from key partnerships with the likes of Foot Locker (FL - Free Report) and other sneaker-heavy retailers.

Nike is currently a Zacks Rank #1 (Strong Buy) that rests in the top 28% of our more than 250 Zacks industries. And the sportswear powerhouse is projected to report its second-quarter fiscal 2020 financial results on December 19, based on our earnings calendar—Nike posted its Q2 FY19 earnings on Dec. 20.