Earnings per share (EPS) in the third quarter (excluding 15 cents from non-recurring items) amounted to $1.66, which surpassed the Zacks Consensus Estimate by 48.2% and surged 59.6% year over year. The bottom line was primarily driven by surge in operating income.

Revenues of $1.2 billion beat the consensus mark by 13.3% and increased 38% year over year. The uptick was driven by new COVID-19 response work such as vaccination distribution support services, unemployment insurance program support, disease investigation, contact tracing and other key initiatives.

Shares of MAXIMUS have gained 6.7% in the past year, against 0.2% decline of the industry it belongs to. 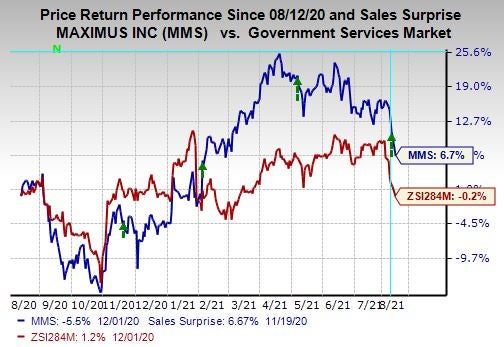 U.S. Services segment revenues of $436.3 million increased 29% (all organic) year over year, mainly owing to new work. The uptick was primarily driven by an estimated $164 million of COVID-response work.

U.S. Federal Services segment revenues of $617.6 million rose 37.2% from the year-ago quarter’s reported figure. The uptick was due to increase in COVID-19 response work that exceeded company expectations and contributed $280 million of revenues to the segment.

Outside the U.S. segment, revenues of $189.6 million increased 66% year over year on a reported basis. This segment realized growth driven by efficient operations in Australia, where market conditions continued to create and sustain job opportunities.

This Zacks Rank #3 (Hold) company ended fiscal third quarter with cash and cash equivalents of $96.1 million compared with $101.7 million in the prior quarter. The company used $33 million of cash from operations. Free cash flow is $41.6 million. MAXIMUS paid out dividends of $17.2 million.You can see the complete list of today’s Zacks #1 Rank (Strong Buy) stocks here.

For the third consecutive quarter, Maximus is increasing revenues, earnings and cash flow guidance for fiscal 2021.

Equifax (EFX - Free Report) reported better-than-expected second-quarter 2021 results. Adjusted earnings of $1.98 per share beat the Zacks Consensus Estimate by 15.8% and increased 23.8% on a year-over-year basis. Revenues of $1.23 billion outpaced the consensus estimate by 6.4% and increased 25.6% year over year.