Shares of Jacksonville, FL-based CSX Corporation (CSX - Free Report) hit a 52-week high of $55.31 per share during the course of the trading session on Jul 5, before retracing a bit to close the session at $55.09 per share.

Notably, the company’s shares have performed impressively in the last three months. The stock has rallied 15.47%, comfortably outperforming the Zacks categorized Transportation - Rail industry’s gain of 7.22%. 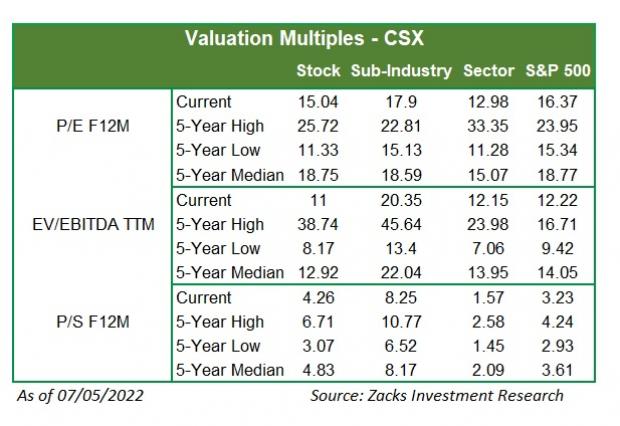 Catalysts Behind the Upsurge

CSX Corp. witnessed expansion in volumes across most key segments in the first quarter of 2017. Coal revenues surged 31% year over year to $522 million due to a 3% improvement in volumes. This is encouraging as coal-related headwinds had hurt results for quite some time. Volume growth is expected in the second quarter as well. Driven by improved efficiencies, the company expects the bottom line to increase by 25% in 2017 on a year-over-year basis.

At the 2017 Bank of America Merrill Lynch Conference, CSX Corp. projected a modest increase in volumes in the second quarter. The company stated that second-quarter coal volumes inched up 1% on a year-over-year basis (period considered Apr 1- May 12).

Moreover, CSX Corp. announced an impressive 11% dividend hike in its quarterly payout policy by dint of which, the new quarterly dividend has now risen to 20 cents per share. In another shareholder friendly move, the company’s board has cleared a new $1 billion share buyback program which the management expects to complete by Mar 31, 2018.

Putting all rumors to rest, the company had earlier announced in March that it has inked a deal with Paul Hilal’s Mantle Ridge hedge fund. Per the agreement, CSX Corp. has appointed E. Hunter Harrison as its chief executive officer (CEO) with immediate effect. Harrison’s appointment seems prudent as the company remains focused on enhancing its fortunes. It aims to report an operating ratio in mid-60s by this year-end.

Given the wealth of information at the brokers’ disposal, it is in the best interests of investors to be guided by their advice and the direction of their estimate revisions, which serve an important pointer in determining the stock price.

CSX Corp. has an attractive VGM Score of 'A'. Here V stands for Value, G for Growth and M for Momentum and the score is a weighted combination of these three metrices.

Shares of Kansas City Southern, Norfolk Southern and American Airlines have rallied 19%, 6% and 23% respectively, in the last three months.