Understanding the True Cost of Load Fees in Mutual Funds

One of the most discussed items of the mutual fund universe are Loads; otherwise known as mutual fund sales charges, or Shareholder Fees.  There are several different kinds of Loads, but essentially they are all very similar, and the end result is that the loads take money out of your return either before, during, or after your investment in the fund.

In theory, the purpose for the Loads is that you are paying for an expert to buy, and sell the best stocks for the fund.  For this expert stock picking you pay (for Loaded Mutual Funds) a load, or a sales fee for the expert’s knowledge of the markets.  While this seems normal for most Americans (paying for expert service), most Americans don’t realize how much of their return is going towards these loads.

There are several different names for these fees; Sales Loads, Redemption fee, Exchange fee, Account fee, and Purchase fee.  These are referred to as Shareholder Fees in the Fund’s prospectus.  Further, there are also Annual Fund Operating Expenses, which include Management Fees, Distribution (12-b-1) fees, Other Expenses, and Total Annual Fund Operating Expenses.  All Loads have to be disclosed in the fund’s prospectus.

3 Most Common Types of Fees, and What they Cost the Investor

The most common, is called the Front-End Load.  This basically states that the instant you purchase a particular fund, you pay a sales fee, typically around 5% on the total amount you are investing.  While the SEC does not limit the percentage of a sales load a particular fund may charge, the Financial Industry Regulatory Agency (FINRA) imposes limits on some fees, specifically an 8.5% maximum sales load.

Investment Example:  If you invest $5,000 into a fund with a 5% front-end, you are paying $250 in Front-ended fees.  So, before you have any shares of the mutual fund, the broker takes out $250 from your initial $5,000 investment.  So, you are now only investing $4,750 dollars (assuming no further fees) to invest into the fund’s shares.

The next most common are Deferred Sales Charges, or Back End Load, which is when the fee is enacted when the shareholder sells the fund shares.  There is a caveat to this sort of fee, and you need to check with the prospectus to ensure that you, the investor fully understands the basis for the fee calculation.  Typically, but not always, the fund will take the lesser of either the initial investment, or the value of the investment at the time of sale.

As an investor, you should be aware, this is an area where investors get raked over the coals on their returns because there is typically a thing called CDSL that is attached with Back End Loaded fees.  CDSL, or Contingent Deferred Sales Load, is the most common type of back end sales load.  The total fee for this fund is calculated by how long the investor holds the position.  On average, the typical CDSL is 5%, if the investor holds the position for 1 year or less, 4% if the investor holds for 2 years or less, and all the way to 0% by the end of year 5.   On the surface that seems great for a long term holder, but our third type of fee comes into play.

Funds with CDSL’s almost always have an annual fee called a 12b-1 fee attached to the fund.  And this is where un-savvy investors loose a big chunk of their returns.

As the chart below demonstrates, while the investor believes that they are lowering their Load cost by buying a CDSL fee fund because the investor thinks,  hey after 5 years I don’t have to pay any fees, because my CDSL went to 0% after the fifth year of the investment.   You would be wrong, and losing a lot of your total return on the investment.  While it is true the CDSL went to 0% in year 5, you will notice that the investor is still paying 6% when they sell the position.  This is the EXACT SAME amount you would have paid in year 1, as in year 5, but it gets worse as the years go on.   In year 10, you are not paying 0%, you are paying 10%, and 1% more each year till you sell the entire position. 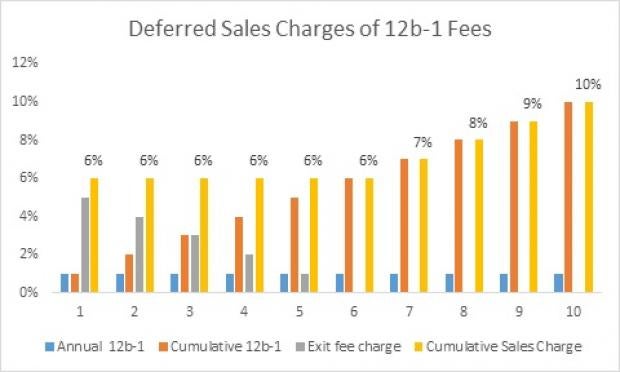 This is due to the 12b-1 fee.  This fee can be as high as 1% (and typically is) for a back loaded fund, and in some cases can be as much as 0.25% on the Font End Load.  This is where most investors get tripped up, and end up paying a good portion of their gains to the broker.  As you can see in the chart above, the annual 1% fee creates a larger “commission” for the broker while being disguised as a way to decrease the investors cost.

The 12b-1 fee is considered a “special marketing fee”, but the street calls it a disguised broker’s commission.

When choosing a mutual fund, it is detrimental to the investor not to check out all the fees associated with the fund.  This could be the difference in 10’s of thousands of dollars over the long term for the investor.  All the appropriate information will be located in the fund’s Prospectus under the heading Shareholder Fees, and is a must read for any savvy investor.