Kaman Corporation KAMN reported weaker-than-expected results for second-quarter 2018. However, the top- and bottom-line figures improved on a year-over-year basis.

Quarterly adjusted earnings came in at 54 cents per share, missing the Zacks Consensus Estimate of 62 cents. However, the bottom line came in 12.5% higher than the year-ago tally.

Revenues in the reported quarter were $468.1 million, up 4.3% year over year. However, the top line missed the Zacks Consensus Estimate of $469 million. 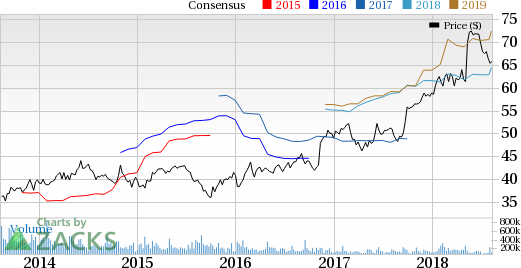 Selling, general and administrative expenses in the reported quarter were $114.3 million, higher than $108 million recorded in the year-ago quarter. Operating margin was 4.5%, down 140 bps year over year.

Kaman currently predicts that its Aerospace segment will generate revenues of roughly $755 million in 2018. Also, the Distribution segment revenues are projected at $1,135-$1,170 million. Operating margin of the Aerospace segment is estimated to lie within the 16.6-16.8% range. The same for the Distribution segment is estimated to lie in the band of 4.9-5.1%.

Kaman currently carries a Zacks Rank #3 (Hold). Some better-ranked stocks in the Zacks Industrial Products sector are listed below:

Altra Industrial Motion Corp. AIMC sports a Zacks Rank of 1 (Strong Buy). The company pulled off an average positive earnings surprise of 4.01% over the last four quarters. You can see the complete list of today’s Zacks #1 Rank stocks here.

Apogee Enterprises, Inc. APOG is another Zacks #2 Ranked company. The stock generated an average positive earnings surprise of 0.88% during the same time frame.