Actuant Corporation yesterday announced that it reached a Securities Purchase Agreement with One Rock Capital Partners, LLC’s affiliate to sell its Engineered Components & Systems (“EC&S”) segment to the latter for $214.5 million. The deal has been approved by Actuant’s board of directors.

This move is in sync with the company’s intention of building its industrial tools and services business and will help in enhancing shareholders’ value.

Based in New York, One Rock Capital Partners primarily engages in making acquisitions in multiple industries. A few prime investment areas of the company are healthcare products, specialty manufacturing, chemical industry, food manufacturing, environmental services and others. The firm has a capital base of roughly $1.4 billion.

The transaction value has been fixed at $214.5 million, of which $3 million will be paid after the deal completion in four installments (quarterly). Actuant intends on using the sale proceeds for boosting growth opportunities in the Enerpac Tools and Services platform, repurchasing shares, making acquisitions and repaying debts.

Subject to the receipt of approval from regulatory authorities and receipt of other approvals, Actuant anticipates the transaction to close in the last quarter of calendar year 2019.

The company predicts divestiture charge and non-cash impairment charge to be roughly $300 million. This will be recorded in the fourth quarter of fiscal 2019.

In the past three months, Actuant's shares have moved down 10.3% compared with the industry's decline of 3.5%. 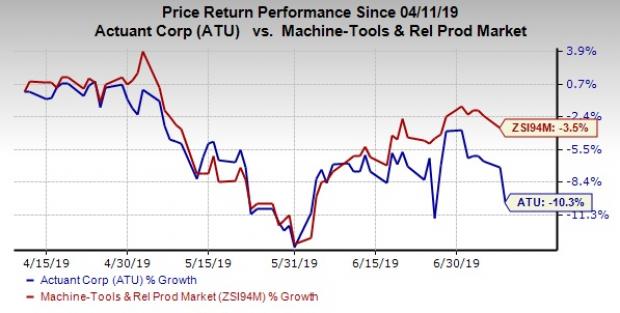 In the past 60 days, earnings estimates for all three stocks have improved for the current year. Further, average earnings surprise for the last four quarters was positive 8.43% for Roper, 16.56% for Chart Industries and 8.36% for RBC Bearings.