Apart from providing a host of services for theatrical and television production for cinema exhibition, broadcast and home entertainment, the companies work with film studios, content creators, post-production facilities, cinema operators, broadcasters as well as video game designers. Some prominent players even have a presence in the music and image-based software markets worldwide.

Let’s take a look at the three major industry themes.

•    Over the past years, the shift to digital technology has catered to the demand for high-resolution video, reduced the problems of radio frequency and electromagnetic interference, making audio-visual systems more data-network friendly. Wireless transmission has enabled the broadcast of audio-video signals through wireless data networks in a seamless manner, while improving productivity. The industry has been providing valuable services to a variety of media producers. However, easy online accessibility of recording equipment and the widespread availability of distribution channels on the Internet have significantly eroded margins in the sector.

•    In the United States, smart-connected televisions, microphones and speaker enclosures are the most popular electronic devices among customers. But the U.S. manufacturers of audio and video systems continue to face intense competition from importers of comparatively low-priced devices, particularly from China, Vietnam and Mexico. Also, decline in music sales has taken a heavy toll on the industry’s prospects. Nevertheless, companies are benefiting from investments in leading-edge technology solutions that create a better communications experience. Furthermore, stability among these producers as well as various advertisers will likely enable entertainment industries to take advantage of increasing consumer disposable income levels.

•    The COVID-19 pandemic has led to a slowdown in economic activities and the audio-visual industry is no exception. The crisis, which is gravely impacting the global economy, has compelled policymakers to look for ways to respond. The industry is witnessing sluggish growth due to a slowdown in TV and film production. As government spending increases to stimulate the economy, the industry players should rebound. Meanwhile, the need for video post-production services will likely rise over the next five years as the downstream market continues to grow. That said, changing consumer preferences, licensee demand, a shift in industry standards and rapid obsolescence of existing products and services remain a challenge.

The Zacks Audio Video Production industry, which has nine constituent companies, is housed within the broader Zacks Consumer Discretionary sector. It currently has a Zacks Industry Rank #106, which places it at the top 42% of more than 250 Zacks industries.

The group’s Zacks Industry Rank, which is the average of the Zacks Rank of all the member stocks, indicates bright near-term prospects. Our research shows that the top 50% of the Zacks-ranked industries outperform the bottom 50% by a factor of more than 2 to 1.

The industry’s positioning in the top 50% of the Zacks-ranked industries is an outcome of a positive earnings outlook for the constituent companies. Looking at the aggregate earnings estimate revisions, it appears that analysts have gained faith in this group’s earnings growth potential. The industry’s earnings estimates for the current year and the next have increased by 20.2% and 9.1%, respectively, in the past three months.

Before we present a few audio-video production stocks that are positioned to outperform the market based on a healthy earnings outlook, let’s take a look at the industry’s recent stock-market performance and valuation picture.

The Zacks Audio Video Production industry has outperformed both the broader Zacks Consumer Discretionary sector and the S&P 500 composite in the past year. 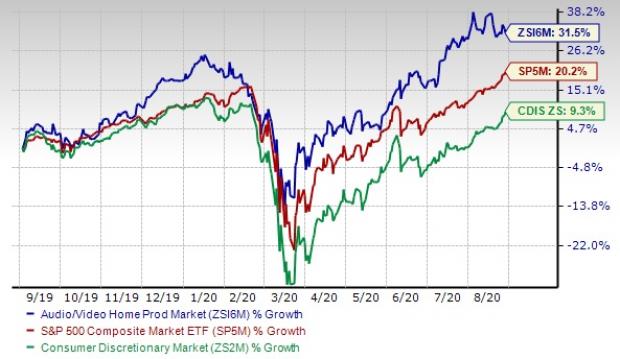 The industry has performed well despite drastic changes in how media is consumed, distributed and recorded. It is expected to benefit from long-term growth drivers, as the economy reopens followed by an improving macroeconomic environment, technological advances and an increase in consumer spending. The rise in demand from record labels, TV producers and advertisers are anticipated to drive revenue growth. However, the profitability of individual companies primarily depends on manufacturing efficiency as well as effective marketing and distribution process.

None of the stocks in the industry currently sport a Zacks Rank #1 (Strong Buy). So, we are presenting two stocks with a Zacks Rank #2 (Buy) that investors may consider betting on now. You can see the complete list of today’s Zacks #1 Rank stocks here.

GoPro, Inc. (GPRO - Free Report) : Shares of this San Mateo, CA-headquartered action video camera maker have returned 22.7% in the past year. The Zacks Consensus Estimate for its current-year earnings has been revised 75% upward in the past 30 days. 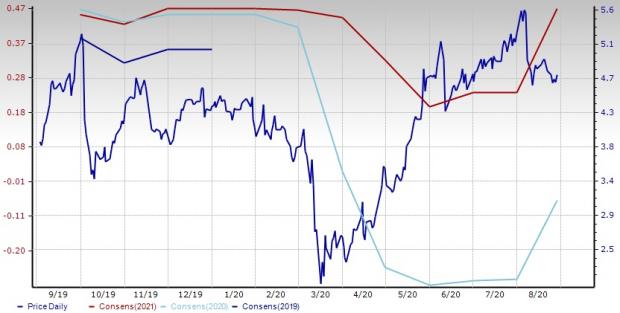 Toshiba Corporation (TOSYY - Free Report) : The stock of this Tokyo, Japan-based electronic devices provider has lost 4% in the past year. The consensus estimate for its current-year earnings has been revised 63.3% upward in the past 30 days.

We are also presenting two stocks with a Zacks Rank #3 (Hold) that investors might keep on their radar.

Dolby Laboratories, Inc. (DLB - Free Report) : Shares of this San Francisco, CA-based audio and imaging technology creator have added 14.3% in the past year. The consensus estimate for its current-year earnings has been revised 21.6% upward in the past 30 days. Dolby has a long-term (3 to 5 years) earnings growth expectation of 13% compared with 14.8% of the industry. It has a trailing four-quarter earnings surprise of 64.6%, on average. The company’s earnings beat the Zacks Consensus Estimate in two of the last four quarters. 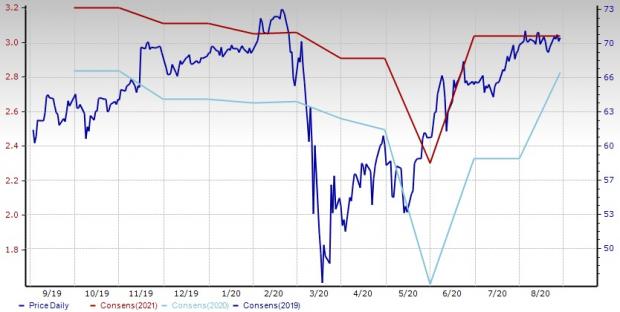 Sony Corporation (SNE - Free Report) : Shares of this Tokyo, Japan-based electronics and media company have rallied 39.5% in the past year. The consensus estimate for its current-year earnings has been revised 23.5% upward in the past 30 days. 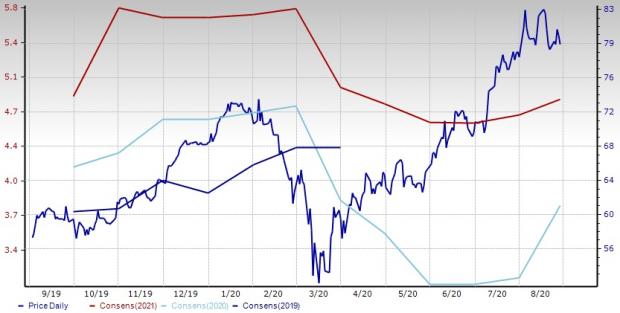