Ecommerce -- i.e., the most happening part of the retail industry -- doesn’t operate exactly like its brick-and-mortar counterpart. While goods and services do change hands, there’s a completely different infrastructure involved, whether it’s in the marketplace, logistics or the payments system. That’s because each of these things is necessarily driven by technology.

The recent past has, however, seen traditional retailers like Wal-Mart investing increasing amounts in building this technological infrastructure even as Amazon takes an increasing interest in brick-and-mortar operations to drive efficiencies in its delivery system.

Retail ecommerce is also unique because a single company (Amazon) constitutes practically all of it. While new players are emerging, it won’t be easy to unseat Amazon simply because of its size, experience, prices and loyalty program. So it’s only a company like Wal-Mart, which has similar resources and huge experience, that can hope to truly challenge the ecommerce leader. And that’s still a few years off.

The other major point of difference is the fact that unlike traditional retail it’s relatively easy for an advertiser or other Internet service provider to also get involved in the retail process and thereby siphon off some of the profits.

The following diagrams seek to define the broad spectrum of companies primarily dependent on the Internet for the distribution of their goods and services. 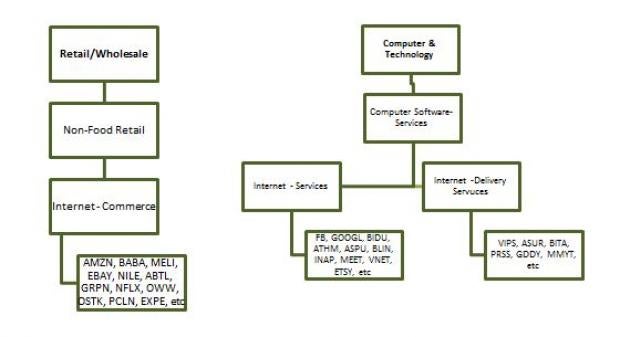 This segment is obviously in the growth phase because revenues are growing strongly (up 86.3% in the last two years). But what’s more encouraging is the growth in EPS before non-recurring items (up 240% on a flattish share count). So despite high investments, a significant chunk of cash generated from sales is falling through to the bottom line. What’s more, estimates for the segment have also trended up since the third quarter of 2015 and prices have followed suit.

The Internet - Services segment hasn’t done quite as well, having grown 15.6% in the past year. And following the same pattern as Internet - Commerce, segment growth has decelerated to 4.1% since the elections.

Latest available data shows a slower revenue growth rate (than Internet - Commerce) of over 35% in the last two years, a lower-margin profile, with EPS growth also much slower at around 44% on a share count that has been lowered consistently. Estimates for the segment have trended up since the first quarter of 2016 and prices have followed suit.

The Internet - Delivery Services segment is somewhere in between the other two, trailing the commerce segment with a growth rate of 12.0%. But the interesting thing here is that the segment was doing better than the S&P 500 until the election. Afterwards, it changed course to grow at a slower rate than the S&P 500.

Latest available data shows a downward trend in revenue and gross profit and upward trend in opex, interest expense and EPS before non-recurring items. The debt to total capital ratio is going down, however, so companies in this segment appear to be going for higher-interest debt.

The ecommerce marketplace necessarily comprises both buyers and sellers, so it helps to take a quick look at what’s going on with them-

According to Frost & Sullivan, Southeast Asia (only Indonesia, Malaysia, the Philippines, Singapore, Thailand and Vietnam) is poised to become one of the world's fastest-growing regions for e-commerce revenues, growing from around $11 billion in 2015 to more than $25 billion by 2020. So let’s just touch upon prospects in the Chinese and Indian markets since they are on a very strong growth trajectory.

According to Forrester research, the five key Asia/Pacific markets of China, Japan, South Korea, India and Australia will almost double from $733 billion last year to $1.4 trillion in 2020. Size and population density in China and India make them very important markets.

According to Forrester, China will remain the biggest ecommerce market in the next few years generating 9X the size of the Japanese market and 17X the size of the South Korean market by 2020.

With the digital revolution in China, many Chinese have multiple devices they use to research a product or shop on. Devices will take a new turn this year as virtual reality (VR) starts playing a bigger role taking consumers from the “VR café” experience they enjoyed in 2016 to devices enabling the experience. eMarketer quotes a GfK forecast that retail sales through virtual reality (VR) devices in China will grow from RMB 650 million in 2016 to RMB 1.6 billion in 2017. Moreover, all the big ecommerce companies like Alibaba, Tencent and LeEco will continue to invest heavily in VR this year.

Cross-border trade is another driver, as Chinese youngsters are extremely brand conscious and like to buy foreign goods, especially if they’re from the U.S., South Korea or Japan and especially in categories like food, dairy, personal care and beauty. But local brands are increasingly capturing mind share, especially in electronics and mobile phones. The Chinese Ministry of Commerce says that cross-border transaction value will make up 20% of total Chinese foreign business and continue to grow at over 30% a year.

The Ministry also sees a growing number of Tier 2 and Tier 3 cities coming online with only 10.6 million of the estimated 159.9 million new users between 2015 and 2018 coming from Tier 1 cities.

According to the ASSOCHAM-Resurgent India study, the number of people shopping online will grow from an estimated 69 million in 2016 to 100 million in 2017 driven by a growing number of digital natives (including people in their early teens and from tier two and tier three cities), better logistics, broadband and Internet-enabled devices.

The challenge is more complex for the big players because the number of buyers and sellers is growing as is the volume of transactions. Amazon deals with this through its warehouses and encourages sellers to store with it through the Fulfillment by Amazon (FBA) initiative. FBA requires sellers to store inventory in Amazon warehouses with Amazon taking care of sales and support. This helps to cover cost of the warehouses that Amazon needs to invest in anyway. In some cases, Amazon ties with retailers to use their brick-and-mortar locations as pickup points for customers with those requirements. Amazon has also leased 21 aircraft to support its logistics operations.

For big traditional retailers, omnichannel is a stepping stone to the online world. They already have the logistics and physical stores in place though of course they are adjusting locations in line with expansion plans. So while they continue to invest in the physical store experience they are supplementing this with online channels to expand their reach. Book online and pick up at store is a popular model for them.

Alphabet has launched “Purchases On Google,” which is a variation of its usual product listing ads (PLAs) for Android and iOS devices. The objective is to speed up the purchasing process for customers. There are no additional charges/CPCs for these ads. The Google carousel displays the products in the usual way, but if they qualify, a “Buy On Google” message appears that leads the user to a seller-branded page. Either fresh payment information or the details stored on Google allows immediate checkout from this page. Google only processes the sale but order fulfillment, customer interaction and customer data remains available to the retailer.

Given the way the ecommerce segments are functioning, especially in the last few months, it isn’t surprising that none of the three have a favorable Zacks Industry Rank. So the Internet - Commerce, Internet - Services and Internet - Delivery Services have ranks of #227, #191 and #171, respectively.

We rank the 264 industries across the 16 Zacks sectors based on the earnings outlook and fundamental strength of the companies in each industry. As shown in the diagram above, two (Retail/Wholesale and Computer & Technology) of the 16 broad Zacks sectors are related to the ecommerce industry. The outlook for industries positioned at #88 or lower is 'Positive,' between #89 and #176 is 'Neutral' and #177 and higher is 'Negative.'

The beat ratios were also disappointing, which is kind of understandable since the bulk of the retail sector comprises more mature companies, so estimates are more accurate than other sectors (like technology for example). This quarter, the sector is expected to report revenue and earnings growth of 3.7% and -1.3%, respectively. For comparison purposes, the S&P 500 will grow 6.8% on revenue and 7.1% on earnings.

While we generally prefer stocks operating in strong industries at any point of time, a negative sector outlook (in this case driven largely by President Trump’s China and immigration policies) doesn’t mean that there aren’t any good picks at all.

Zacks methodology helps us find the stocks that have upside potential despite the hiccups.

So at the moment, we can recommend Internet - Commerce stocks like Alibaba BABA and Mercadolibre MELI. Note that Alibaba operates in China while Mercadolibre operates in Latin America. They are leading players in their served markets, which are in expansion mode.

While their fortunes are linked to the U.S. as well, they will be relatively less affected by President Trump’s adverse policies. So there’s plenty going for them. Both stocks carry a Zacks Rank #1 (Strong Buy). You can now see the complete list of today’s Zacks #1 Rank stocks here.

As far as Internet - Services stocks are concerned, we like Autohome ATHM, which has a Zacks Rank #1 as well as Aspen Group ASPU, Bridgeline Digital BLIN, Internap Corp. INAP, Leaf Group Ltd. LFGR, MeetMe MEET and The Trade Desk TTD.

The stocks in the Internet - Delivery Services segment aren’t recommended at this time.

Ecommerce remains a fairly small part of total retail at just 7.1% of U.S. retail sales, but eMarketer is optimistic that the share will grow to 9.8% by 2019. Note that the share of ecommerce sales in total retail sales is relatively lower in the U.S./North America with Western Europe and Asia/Pacific already doing 7.5% and 10.2% of their purchases online.

The U.S. Census Bureau says that the manufacturing sector is relatively more reliant on e-commerce (60.9% of their total shipments), followed by merchant wholesalers (27.7% of their total sales). These two segments make up the business-to-business (B2B) category.

Retailers and service providers generated just 6.4% and 3.8%, respectively of their revenues online, with retailers growing faster than service providers. The Bureau categorizes these two segments as business-to-consumer (B2C).

Manufacturers and retailers grew their business double-digits, while wholesale and services saw single-digit growth. [All the above data from the U.S. Census Bureau relate to 2014, as published in June 2016].

Government data indicates that retail ecommerce has outpaced total retail sales growth in recent times even in bad quarters for the sector. Some of this is on account of the continued shift from offline to online retail, as customers (baby boomers) move to online channels. But it’s also because new consumers (millennials) often start out on online channels.

These consumers spend more time in a connected, social environment and take for granted many of the online tools previous generations struggled to understand, appreciate and adopt. Therefore, ecommerce will likely continue to outpace total retail sales in the foreseeable future.