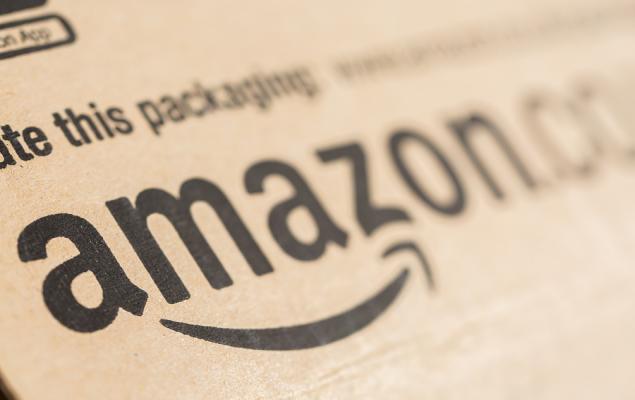 The online retail king has just officially announced its annual digital shopping bonanza, an event that has become larger than Black Friday and Cyber Monday combine for this e-commerce powerhouse. Amazon's (AMZN - Free Report) Prime Day has proven to be the infamous retail disruptor's most valuable event. Last year Amazon sold over 175 million items on the extended Prime Day (now lasting 48 hours), which analysts estimate was worth more than $7 billion (5 times the average daily sales of that quarter).

Every year since Prime Day was incepted (2015), it's produced new record figures. 2020's delayed event is expected to generate another record-breaking year, with the number of Prime members consistently growing (surpassing 150 million as of January 2020). Having a household Prime account has become an American staple, and this digital authority is now looking to make it a global necessity.

Prime Day symbolizes the retail apocalypse and how retail giants like Amazon can control consumer spending. The Friday after thanksgiving, coined Black Friday, has historically been the biggest discount shopping event of the year for more than a century, and now after only 5 years, Prime Day is on the brink of usurping the most commercialized US "holiday."

Prime Day is the bane of all other retails, both brick & mortar and digital. With the massive online shopping traffic driven by the e-com king's digital shopping 'holiday,' other shopping platforms follow Amazon's lead and offer discount events on the same day(s) as Prime Day.

With Amazon having firm control of the e-commerce space (49% and growing), other retailers have no choice but to follow suit. Walmart (WMT - Free Report) and Target (TGT - Free Report) , along with a whole slew of competitors, are expected to offer a similar discount event to take advantage of the above-average 'click traffic.'

AMZN has historically rallied up to its Prime Day. Half a month before the event, these shares tend to take off in anticipation. Almost every year since Prime Day started, AMZN shares have surged between 7% - 10% in the two weeks leading up to this unparalleled event, with the exception of 2017, which only saw a 2% bump.

Below I will review Amazon's stock performance each year. I will also look at how – what I see as its most significant brick & mortar competitors who have been successfully transitioning to omnichannel solutions - Walmart and Target reacted in the wake of the big event each year.

AMZN shares came up towards its 2018 high of around $2,050 as Prime Day was about to commence, but the shares couldn't break through this old resistance level, which I illustrated below. AMZN quarterly earnings miss later in July did not help these shares price action, and the stock traded sideways into 2020.

TGT and WMT took off into 2020 with strong earnings on the tailwinds of their improving omnichannel platforms, which includes: direct to consumer sales, in-store pick-up, and other digitally leveraged solutions. 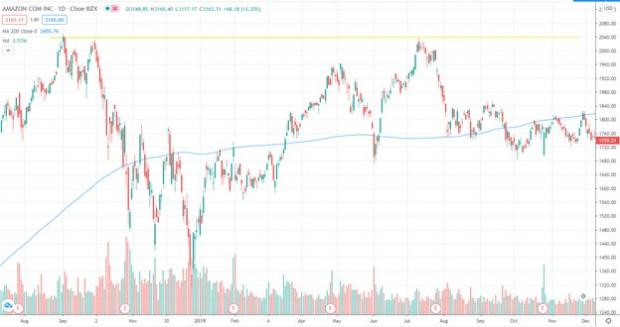 Following this event, AMZN shares kept surging into the beginning of September but hit a strong resistance just around $2,040 (resistance represented by the yellow line above) a share and bounced lower into the Q4 market sell-off into the end of 2018. WMT and TGT kept their upward momentum into the beginning of November when everything took a plunge.

AMZN traded effectively sideways until its tremendous September quarter results, in October which pushed Amazon's share price out of the triple-digits for the last time. WMT and TGT surged big following the event as Amazon missed big on its June quarter earnings release, which led people to assume that Target and Walmart were taking market share.

AMZN kept going into October, where the stock hit resistance and came back. WMT and TGT traded lower in the weeks following.

WMT and TGT both experienced substantial losses in the weeks following the event, while AMZN kept going higher.

What Next For AMZN?

The global pandemic provided Amazon's digital shopping and cloud computing platforms with the most extraordinary tailwind that this enterprise could have hoped for. With the US stuck in the confines of their homes' for an extended period of time, many consumers turned to Amazon's convenient online platform for all their shopping needs, including groceries leveraging its Whole Foods segment.

AWS and its cloud offering have also become a necessity as the world turned to remote working. Being able to access on-premise functionality from home is now essential. The world has prolifically digitalized, and Amazon is perfectly positioned for this economic shift.

Analysts are still increasing optimistic about AMZN shares despite the over 66% appreciation since this crazy year began. 35 out of 35 analysts are calling AMZN a buy today with an average price target of $3,540. Some price targets even surpass $4,000 per share.

AMZN took off today with tech catching a bid and the markets getting excited about the delayed Prime Day, which was finally given a date. The stock is sitting right below its 50-day moving average and interacting with a Fibonacci level I drew up (which you can see circled below). 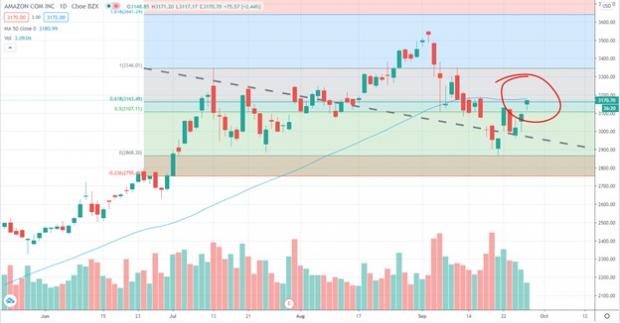 If AMZN can break through its 50-day moving average, I think the stock has a further upside going into its highly anticipated Prime Day(s). WMT and TGT have outperformed the markets this year but are far behind the performance of e-com/cloud-computing leader, Amazon. I still see upside in both of these stocks as they further develop their digital platforms.

Amazon was provided with the perfect storm in 2020, and its share price continues to illustrate the market's enthusiasm for the enterprise's incredibly bright future.

The 3 Tech Giants That Are Driving The 2020 Stock Market