If you have a goal in life, it’s never a bad idea to find a model of success to emulate. Someone who already achieved the results you want.

But what if your goal is a more profitable portfolio? We’ve got an idea for you.

It's great place to start on your path toward greater profitability. Here are three names that recently made the screen and are worth watching:

What a difference a new management team can make!

A couple of years ago, it looked like Bed Bath & Beyond (BBBY - Free Report) would go the way of Linens ‘n Things and countless other specialty retailer stores. And that was without a pandemic.

However, new blood brought new prospects for this domestics merchandise and home furnishings giant. The stock is up more than 400% since the coronavirus low and it recently reported its first comps growth since the fourth quarter of fiscal 2016.

Even before we all became homebodies, the new team at BBBY was working to reduce costs, increase financial flexibility and invest in itself to regain its leadership position in the home market. And this reorganization came at just the perfect time.

When the pandemic came, it was able to focus on things like ecommerce, BOPIS (buy online, pick up in store), contactless curbside pickup and same-day delivery. In other words, it did what every retailer had to do in this unprecedented situation.

The result was digital sales growth of 88% in its fiscal second quarter.

Other highlights included earnings per share of 50 cents, which was 47% better than last year’s 34 cents and 394% better than the Zacks Consensus Estimate. That’s right… expectations were for a loss of 17 cents.

Sales of approximately $2.7 billion were down 1.1% from last year, but topped our expectations of $2.61 billion. But of course, the major news was that comparable sales rose about 6%, marking the first growth in almost four years.

The Zacks Consensus Estimate for this year (ending February 2021) is still a loss of 66 cents. However, that has narrowed from a loss of $2.46 just 30 days ago. So analysts really liked that quarterly report.

Even better, the Zacks Consensus Estimate says BBBY is returning to profitability next year (ending February 2022). Expectations are for a profit of $1.19, instead of a loss of 32 cents from a month earlier. 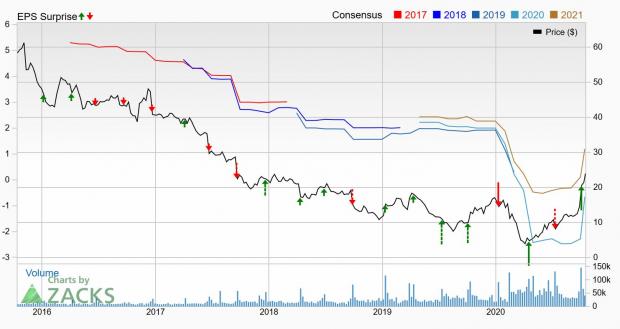 But before you go to Bed Bath & Beyond for some new décor, you may want to make more extensive changes to your place. Maybe you need to paint a few rooms or put a new faucet in your kitchen. Maybe you need a whole new bathroom! Hey… whatever it takes to keep your sanity while staring at the same four walls everyday…

Masco Corp. (MAS - Free Report) can help. The company manufactures, sells and installs home improvement and building products. Brands include Behr paint, Delta faucets and Endless Pools, among many others. It’s two segments are Plumbing Products (which made up nearly 55% of revenue last year) and Decorative Architectural Products (which made up more than 40%).

Strong homebuilding and home improvement markets have put the building products – miscellaneous industry in the top 10% of the Zacks Industry Rank. Furthermore, shares of MAS surged approximately 108% since the coronavirus low.

Earnings per share for the second quarter came to 84 cents, which bettered the Zacks Consensus Estimate by more than 18%. It was also the third straight positive surprise.

Meanwhile, sales of $1.76 billion were 4.2% better than our expectations. Net sales at the Decorative segment was up 8%. Meanwhile, net sales for Pluming were down 14% due to the impact of the coronavirus, but that was still better than expected.

Demand picked up as facilities reopened amid easing restrictions. Most importantly though, that improved demand appears to have continued into the third quarter. It will report again on October 28.

At the moment, earnings estimates remain sharply higher than three months earlier. The Zacks Consensus Estimate for this year is up 15.8% in that time to $2.71. Analysts raised their expectations for 2021 by 11.7% to $2.96, which suggests year-over-year growth of 9.2%.

The Board at MAS also intends to raise the annual dividend 4% to 56 cents per share beginning in the fourth quarter. 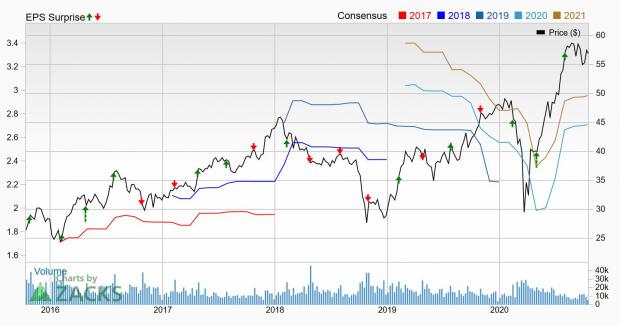 You know where you’re not going to run into a whole lot of people? The open water! Nobody gets on your boat without your permission. And once you leave the dock… that’s it. They’ll be no party crashers or pop-ins unless they’re mighty good swimmers.

Given such an environment, there’s really no mystery in why a company like Brunswick Corp. (BC - Free Report) managed to put together better than expected results, even though the pandemic did impact its performance compared to the previous year.

BC designs, manufactures and markets recreational products, which obviously makes it part of the Leisure & Recreation Products space. That industry is in the top 10% of the Zacks Industry Rank. Specifically, though, the company makes marine engine products and boats under various brands that are well-known to enthusiasts.

Once restrictions started easing a bit, people took off for the water. Demand accelerated into May and June as new and lapsed customers made up half of new boat sales. Its no wonder the stock is up more than 130% from the coronavirus low on March 23.

For its second quarter, earnings per share of 99 cents beat the Zacks Consensus Estimate by more than 130%. It was the company’s fifth straight beat and brought the four-quarter average up to just under 40%.

Revenue of $987.8 million topped our expectations by almost 24%.

Both the top and bottom lines were down from the previous year, but that’s par for the course during this pandemic. More importantly, BC said that all its businesses outperformed expectations to help the company stay resilient in the face of unprecedented challenges. 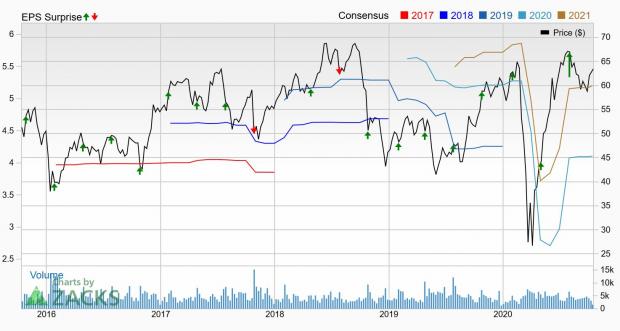