Bull of the Day: Nvidia (NVDA)

Nvidia (NVDA - Free Report) slipped 1.5% during regular trading Monday, after the stock hit new highs last week. The fall was part of the Nasdaq’s broader dip, after the tech-heavy index jumped to new records in morning trading. Despite the small decline, NVDA appears solid heading into the release of its third quarter fiscal 2021 financial results on November 18.

Nvidia rose to prominence as a GPU firm that mostly served the booming global video gaming space. This market alone is massive, with reports projecting that it will climb over 9% to reach $159 billion in 2020 and surpass $200 Billion by 2023. NVDA is set to benefit from this continued growth, but Wall Street in recent years has gravitated toward its expansion beyond the gaming world.

The company, under the leadership of founder and CEO Jensen Huang, has grown into a company that the supports data centers, cloud computing, artificial intelligence, and other tech areas of the future. Last quarter, Nvidia’s revenue soared 50%, with its data center unit up 167% to account for 45% of total sales. “Growth in GeForce gaming accelerated as gamers increasingly immerse themselves in realistic virtual worlds created by NVIDIA RTX ray tracing and AI,” Huang said in prepared remarks.

“Our new Ampere GPU architecture is sprinting out of the blocks, with the world’s top cloud service providers and server makers moving quickly to offer NVIDIA accelerated computing.” 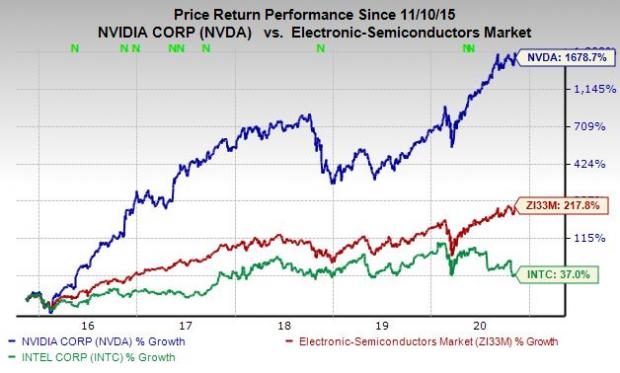 Nvidia has set itself up for greater success in a world dominated by big data, where giants like Microsoft (MSFT - Free Report) and Amazon (AMZN - Free Report) have transformed their companies through cloud leadership. The company has also expanded through acquisitions. This includes its April purchase of Mellanox Technologies for roughly $7 billion.

The deal was NVDA’s largest at the time. But the company made an even bigger splash when it announced in September that it would acquire Arm Limited from Softbank for $40 billion—mostly in stock.

Arm is one of the most important behind-the-scenes companies in the market. It designs and licenses the basic blueprints of chips that consume the least amount of energy, which are used in roughly 90% of the world's smartphones. However, the biggest chip deal in history, which Nvidia hopes will create a global chip titan for the AI age, faces a tough road ahead, as it must get through regulatory approval in the U.S., China, and the U.K.

Even if the deal doesn’t go through, NVDA’s outlook appears solid. Zacks estimates call for the company’s adjusted Q3 earnings to climb over 44% to reach $2.57 a share, on 47% stronger revenue that would see it hit $4.42 billion.

The nearby chart also highlights Nvidia’s strong earnings revisions trends. And the company has topped our bottom-line estimates by an average of 12% in the trailing four periods.

Nvidia’s strong earnings revisions help it land a Zacks Rank #1 (Strong Buy) at the moment. The stock has soared 160% in the last year, against its industry’s 40% climb. This includes a 70% climb in the past six months. NVDA closed regular hours Monday at $545 a share, or roughly 7% off its recent records.

The stock’s valuation is a tad stretched, but investors have been willing to pay a premium for years. In the end, Nvidia appears to be worth considering as a longer-term bet on secular growth trends within tech.