We are off to a great start in the Q4 earnings season, with a historically high proportion of the reporting companies not only beating consensus EPS and revenue estimates, but also providing positive and reassuring guidance and commentary about the current and coming periods. This is helping sustain the positive revisions trend that has been in place since July 2020, as the chart below shows. 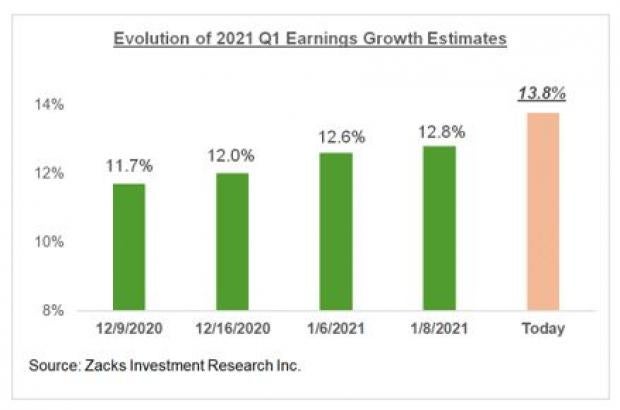 We expect this favorable trend to strengthen and accelerate as get into the heart of the Q4 earnings season this week, with more than 350 companies on deck to report results, including 113 S&P members. By the end of this week, we will have seen Q4 results from more than 35% of S&P 500 members.

By the end of this week, we will have a lot more confidence in our initial positive view of the Q4 earnings season.

The two sets of comparison charts below put the Q4 results from these 66 index members in a historical context, which should give us a sense of how the Q4 earnings season is tracking at this stage relative to other recent periods.

The first set of comparison charts compare the earnings and revenue growth rates for these 66 index members.

The second set of charts compare the proportion of these 66 index members beating EPS and revenue estimates.

As you can see above, the Q4 results from these index members compare favorably to what we had seen from the same group of companies in the recent past.

Of the major sectors, the Finance sector is heavily represented in the results at this stage, though we have seen a sizable proportion of the Transportation sector’s results as well.

For the Finance sector, we now have Q4 results from 44% of the sector’s total market capitalization in the S&P 500 index. Total earnings for these Finance companies are up +17.2% from the same period last year on +1.9% higher revenues, with 88.9% beating EPS estimates and 74.1% beating revenue estimates.

This is a notably better performance than we have seen from these banks in recent quarters, particularly in the first three quarters of the year. As we mentioned last week, the positive bank results aren’t just reflective of business conditions in the last quarter of 2020, but rather a function of growing optimism about the coming quarters, notwithstanding the elevated infection rates and hiccups on the vaccination front.

The three major banks – JPMorgan (JPM - Free Report) , Wells Fargo (WFC - Free Report) , and Citigroup (C - Free Report) – combined released more than $5 billion in loan loss reserves that they had set aside in the first three quarters of the year to cover loans going bad as a result of the pandemic. In effect, these banks are saying, through these reserve releases, that they expect economic conditions in the coming quarters to be stronger relative to what they had originally modeled. This has a favorable read-through for all sectors, particularly the economically sensitive ones.

Looking at Q4 as a whole, total earnings for the S&P 500 index are expected to be down -5.3% from the same period last year on +0.6% higher revenues, with 9 of the 16 Zacks sectors expected to earn less than the year-earlier period.

Sectors with the weakest growth remain the same ones that struggled in the first three quarters of the year, including Transportation (-102.3% earnings decline), Energy (-95.9%), and Consumer Discretionary (-74%).

The chart below takes a big-picture view of S&P 500 quarterly expectations, with earnings and revenue growth expectations for the next three quarters contrasted with actuals for the preceding four periods; expectations for 2020 Q4 have been highlighted. 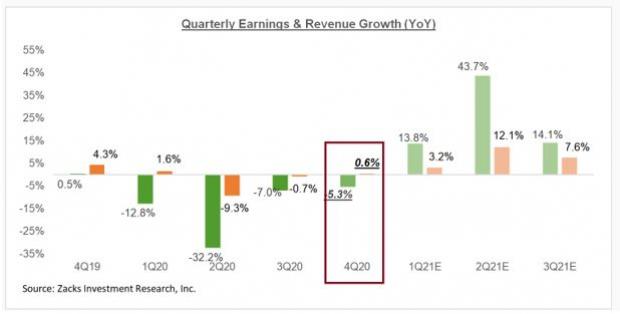 As you can see above, the growth picture is expected to improve meaningfully from the current period (2021 Q1) and onwards. The very strong growth in Q2 reflects the easy comparisons to 2020 Q2 when profitability bottomed following the Covid-19 hit.

The chart provides a big-picture view on an annual basis. 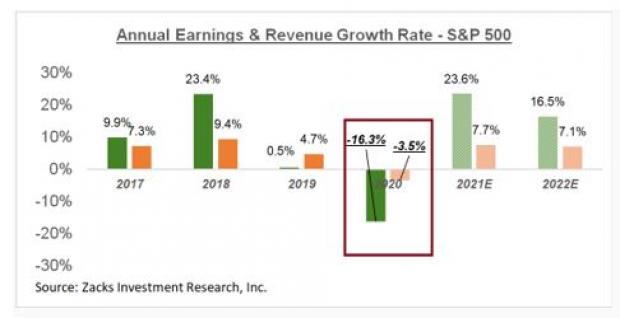 As you can see above, growth is expected to resume this year, with full-year 2021 earnings for the S&P 500 index currently expected to be up +23.6% relative to 2020 estimates.

Estimates for 2021 have been steadily going up over the last six months. But we strongly feel that there is significant room for further positive revisions as the overall macro backdrop stabilizes and gets clearer, particularly in the second half of the year.

For an in-depth look at the overall earnings picture and expectations for the coming quarters, please check out our weekly Earnings Trends report >>>> Early Q4 Results Show an Improving Earnings Picture