A Positive and Reassuring Earnings Picture

For the 114 S&P 500 members that combined account for 29.3% of the index’s total market capitalization, total Q4 earnings are down -4% from the same period last year on +0.6% higher revenues, with a very high 83.3% beating EPS estimates and an even more impressive 77.2% beating revenue estimates.

The reported Q4 earnings growth rate has benefited from strong results in the Finance sector, where reserve releases helped the major banks boost their profitability. For example, JPMorgan’s (JPM - Free Report) Q4 earnings jumped +42.4% from the year-earlier period, as the banking giant reversed course on the loan-loss reserves.

Barring a few exceptions, results have been stronger than expected. That is not just the case in the Finance sector, with bellwethers from a host of other spaces like 3M (MMM - Free Report) , Microsoft (MSFT - Free Report) , Johnson & Johnson (JNJ - Free Report) and others not only beating estimates but also providing either raised guidance or favorable commentary on trends in business conditions. This is helping sustain the positive revisions trend in earnings estimates that we have been seeing since July 2020. The chart below shows how estimates for the current period (2021 Q1) have evolved since mid-December. 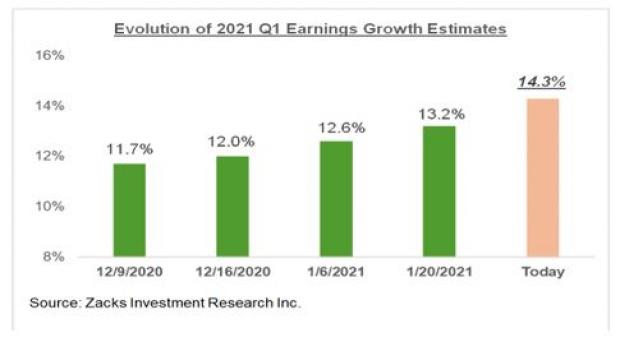 Estimates for full-year 2021 have gone up as well, but we see a significant acceleration in the favorable revisions trend in the coming months on the back of a stronger-than-expected rebound in consumer and business spending as the ongoing vaccination effort gains pace. We strongly feel that current consensus estimates for 2021 GDP and earnings growth understate the full extent of the rebound. The chart below shows the quarterly earnings and revenue growth picture. 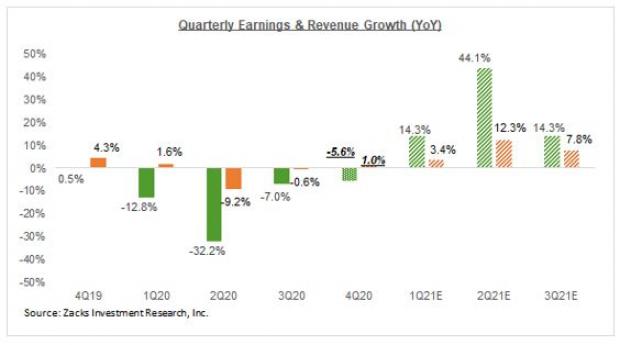 We remain positive in our earnings outlook, as we see the full-year 2021 growth picture steadily improving through the first half of the year as more of the population gets vaccinated.

We strongly feel that current consensus economic growth projections reflect learned experiences of economic recoveries from the last few recessions. We don’t think that this recovery will follow this past pattern as this downturn was fundamentally different, as its epicenter was medical and not financial. As such, we see significant upside to current consensus GDP growth estimates for 2021, which drives our favorable earnings outlook for the year and beyond.

The chart below shows the overall earnings picture on an annual basis. 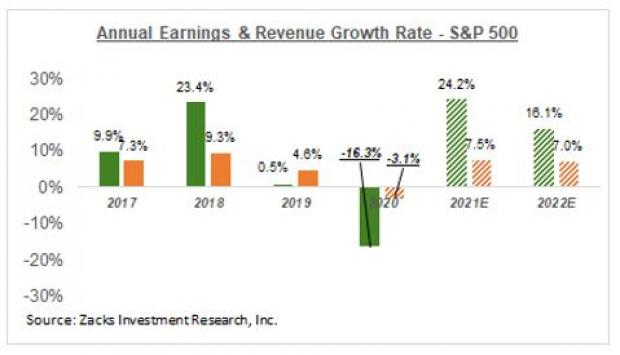 The flow of recent economic readings about the labor market, factory space and even retail sales suggest that activity levels have moderated in response to the ongoing surge in infections. But with the extraordinary vaccination effort already underway, it is reasonable to expect the pandemic getting under control towards the end of the first quarter of 2021.

As such, while growth in the current period (2020 Q4) will likely remain under pressure, we should expect the outlook to steadily improve. Beyond the Q4 earnings season, the outlook remains positive.

More Stock News: This Is Bigger than the iPhone!
It could become the mother of all technological revolutions. Apple sold a mere 1 billion iPhones in 10 years but a new breakthrough is expected to generate more than 77 billion devices by 2025, creating a $1.3 trillion market.