With new stimulus on its way and the vaccine rollout picking up steam, we’ll be seeing a lot of stocks reaching new highs in the next few months. In fact, there are plenty of stocks making history right now!

The Zacks #1 Rank New Highs screen will help you find them. Remember, you shouldn’t be afraid of stocks reaching new heights, because a really smart guy once said that objects in motion tend to stay in motion. The same is true for stocks.

Despite the tech selloff and fears of inflation or overheating; investors are getting ready for an epic spike higher as we get closer to normal. This screen can help you get ready by finding stocks most likely to leap higher moving forward. Below are three names that recently made the list.

If we’re going to talk about energy, let’s just cut to the crude and go right to one of the biggest guys in the room. ExxonMobil (XOM - Free Report) is a leader in the oil & gas – integrated – international space, which is in the top 15% of the Zacks Industry Rank. The company’s size and stable track record make it a bellwether for all of energy and one of the lower risk plays in the field.

Shares of XOM are up approximately 54% so far in 2021 in anticipation of this pandemic running its course. Covid has reduced fuel demand significantly, while the government curtailed production. But the vaccine rollout and new stimulus suggests this unprecedented environment may be coming to an end.

But even through all these challenges, XOM managed to improve its cost structure and become more efficient. It has also beaten the Zacks Consensus Estimate in three of the past four quarters.

Most recently, XOM reported fourth-quarter earnings per share of 3 cents, easily surpassing the Zacks Consensus Estimate of a penny for a positive surprise of 200%. Increased margins for its chemicals segment was a big help to the bottom line.

Total revenue of $46.5 billion dropped year over year due to all the covid difficulties, but the result only missed the Zacks Consensus Estimate by about 4%.

But we’re all thinking about the future right now. Over the past 60 days, the Zacks Consensus Estimate for this year has soared 63.8% to $2.49. Expectations for 2022 are for growth of 12.3% to $3.11. Therefore, we currently expect earnings to jump nearly 25% for next year over this year. 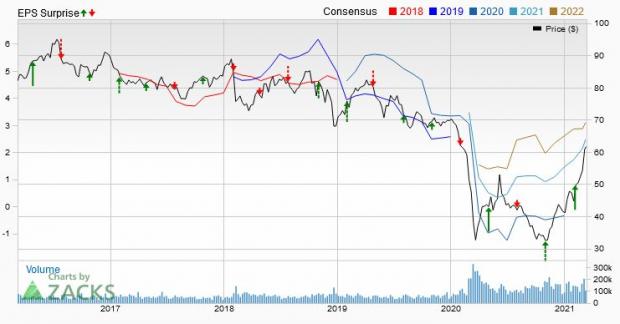 L Brands is an apparel-based specialty retailer that operates Bath & Body Works and Victoria’s Secret. It runs more than 2600 stores and is in the Top 37% of the Zacks Industry Rank as part of the retail – apparel & shoes space. Shares are up more than 48% so far this year and over 168% over the past 12 months.

In order to navigate through these unprecedented times, the company lowered its promotional activity, improved its merchandise assortment and grew its direct channel. The results speak for themselves as LB topped earnings expectations in the past three quarters.

Last month, the company reported fiscal fourth-quarter earnings per share of $3.03, which eclipsed the Zacks Consensus Estimate by 1.3% and improved upon last year’s $1.88. The results marked the fourth beat out of the past five quarters.

Net sales of $4.8 billion fell short of the Zacks Consensus Estimate, but still improved upon last year by 2%. The big star for LB continues to be its Bath & Body Works segment, where total sales surged 22% in the quarter year over year thanks in large part to growth for home fragrances, body care, soaps and sanitizers. The company is in the process of separating it’s Bath & Body Works and Victoria’s Secret businesses sometime around August.

LB didn’t offer a guidance for the full year, but it did give a pretty encouraging range for its first quarter. Earnings per share are expected between 35 cents and 45 cents, which was way better than forecasts at the time. 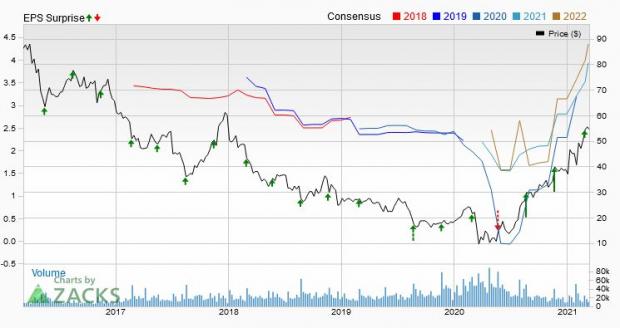 Let’s turn the tables on Capital One Financial (COF - Free Report) . Instead of this company intrusively demanding to know what’s in our wallets, let’s put the spotlight on them and find out what’s happening inside that company! Move over Samuel L. Jackson!

COF is a consumer and commercial lending staple. As you’d probably expect, its biggest operating segment is the Credit Card business (which made up 61.7% of total net revenues last year). Other segments include Consumer Banking (27%), Commercial Banking (10.4%) and Other (0.9%).

Shares are up more than 30% so far this year and have surged over 78% in the past 12 months. As part of the Financial – Consumer Loans space, COF is in the top 16% of the Zacks Industry Rank.

In late January, the company reported its second straight positive earnings surprise. COF reported $5.29 per share for the fourth quarter, which was more than 85% better than the Zacks Consensus Estimate. It also blew past the year-ago result of $2.49.

Total net revenues of $7.3 billion were down 1% year over year, but still exceeded our expectations of $6.9 billion. The company benefited from an improvement in non-interest income, a rise in its loan balance and lower expenses.

Analysts currently expect year-over-year profit growth of more than 15%. But this is before the economy really starts opening again. As folks get back to work and return to a normal life, you can bet they’ll be using their credit cards and maybe even looking for a consumer loan. 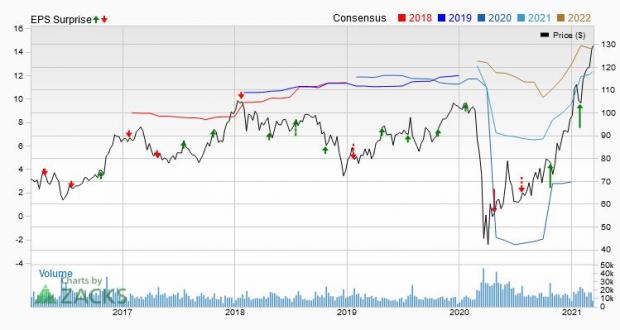