Bull of the Day: Apple (AAPL)

Apple (AAPL - Free Report) doesn’t need much introduction. The company’s products are ubiquitous – in fact, there’s a reasonable chance you’re reading this on an Apple product right now. One of the keys to the Apple’s success is the “stickiness” of their product and services ecosystem.

When a consumer buys an Apple product, it’s rarely a one-time purchase. Instead, they tend  to want another device, or a wearable accessory like earphones or a watch. They also buy high-margin services. Audio and video content, third-party apps and possibly even a paid subscription to the Apple+ streaming services all keep the customer dollars flowing Apple’s way.

Elegant design tricks means that each new hardware addition works seamlessly with the products a customer already owns. It’s easier to buy another Apple product (than an equivalent from a competitor) because you know all you have to do is open the box and turn it on.

That solid business plan - along with innovative supply-chain and logistics operations – took Apple all the way to a market capitalization well over $2 trillion dollars. As the share price climbed, investors wisely became concerned about valuation issues. A small and fast-growing company can trade at a high earnings multiple on the expectations that someday, when it gets to the point that spending slows as revenues continue to increase, it will “grow into” the (formerly) high P/E Ratio.

Over the past 90 days, the share price of Apple has lost more than 5% even as the S&P has gained almost 8%. That’s not totally unreasonable given the valuation concerns.

It’s also an opportunity. Just last week, Apple turned in quarterly results that should have put to rest fears about earnings keeping pace with the rise in share price. Overall revenues were up 54%. iPhone revenues - which generally make up about half of total revenues, depending on the quarter – were up 66%. Mac revenues were up 70% and iPad sales were up 78%. 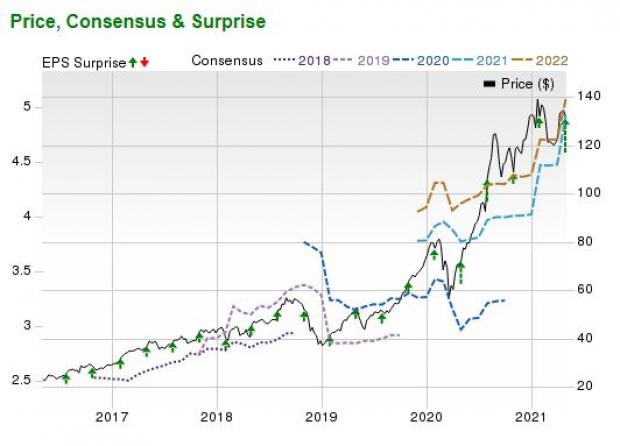 Net earnings of $1.40/share blew away the Zacks Consensus Earnings Estimate of $1.00/share.  The beautiful part is that even with sales up so sharply, so were gross margins. It wasn’t as though Apple was blowing out tired, old merchandise at discount prices, increasing gross sales at the expense of profits or future sales. They were selling the latest, in-demand devices and getting full retail.

You’re probably thinking. “Sure, it was a great quarter, but can performance like that really continue?”

That’s the even more beautiful part. Though Apple hasn’t provided revenue or earnings guidance since before the start of the Covid-19 pandemic, analyst expectations have been rising significantly, with full year 2021 estimate rising 58 cents – or 11% - over the past week.

Simple math will tell you that as estimates rise and the share price declines, you’ll see an improvement in the forward P/E Ratio. That is exactly what has played out in Apple over the last week. From those lofty highs above 30X, the 12-month forward P/E Ratio is now just 25X. That’s just a bit higher than the S&P as a whole – and an arguably well-deserved premium given Apple’s formidable history of beating the estimates.

There are a lot of external factors that seem to be keeping the Apple buyers on the sidelines – chip shortages, corporate tax changes, interest rate fears, etc – but those same issues are facing pretty much every other company, too.

Now, you get a chance to own Apple at a significantly lower earnings multiple than just a short time ago. Even at $2.2 trillion, it’s a legitimate bargain.

Infrastructure Stock Boom to Sweep America A massive push to rebuild the crumbling U.S. infrastructure will soon be underway. It’s bipartisan, urgent, and inevitable. Trillions will be spent. Fortunes will be made. The only question is “Will you get into the right stocks early when their growth potential is greatest?” Zacks has released a Special Report to help you do just that, and today it’s free. Discover 7 special companies that look to gain the most from construction and repair to roads, bridges, and buildings, plus cargo hauling and energy transformation on an almost unimaginable scale. Download FREE: How to Profit from Trillions on Spending for Infrastructure >>