Today’s Bear of the Day happens to be a current favorite of the Reddit/Meme stock crowd, so by the time you’re done reading this, several of those traders will have already fired off their emails to me, telling me that I’m an idiot – a fact which will soon be proven to the world when the stock “goes to the moon!”

The rest of you, please stay with me…

On paper, Tattooed Chef (TTCF - Free Report) is a great story, helping explain it’s popularity with younger investors. The company offers plant-based meals and snacks that come neatly packaged and requiring minimal preparation. Plant-based diets are popular both for their health benefits and for their reduced impact on the environment when compared to large-scale animal meat production facilities.

Though the Tattooed Chef lineup does include a cauliflower-based burger, most of their products aren’t plants made to look and taste like meat - like Beyond Meat (BYND) products - they’re innovative combinations of fruits and vegetables presented in an easy-to-eat format. They’re delicious, too. There are Tattooed Chef Acai Bowls in my freezer right now. I bought them at a big box retailer and they make a fast, healthy breakfast or snack.

Unfortunately, a great product doesn’t always translate to a great company, and that’s the case with the Tattooed Chef. 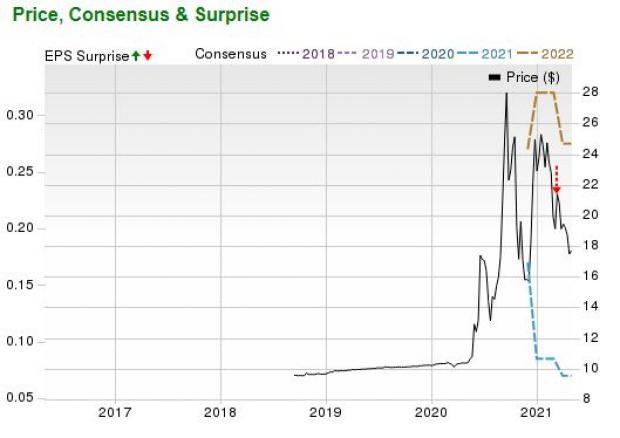 Formed as the result of a successful SPAC merger in October of 2020, TTCF shares initially soared, hitting a high over $28/share in January 2021, but have been sliding since then and now trade below $18/share. A disappointing first quarter as a public company weighed on the shares and estimates for future profitability have been slipping as well, earning Tattooed Chef a Zacks Rank #5 (Strong Sell.)

We’re heading into another earnings report and expectations are for a net profit of $0.02/share on revenues of $46 million.

Let’s start with that revenue number. Sales have been increasing quickly. As a percentage change from when TTCF was a private company, they represent a huge increase. Total revenues in 2021 are forecast to be up 462%.

Take a look at the earnings forecasts next. Two cents this quarter, two cents next quarter and seven cents/share in all of 2021. Kudos to the relatively new company for being profitable on a net basis, but it’s hard to get excited about that sort of earnings trajectory.

A look ahead to 2022 shows the revenue growth flattening off. Tattooed Chef has been very successful at getting their products onto the shelves at Costco (COST), Walmart and Sam’s Club (WMT) and Target (TGT). Selling at those stores is a great way to ramp up total sales quickly, but it’s also a difficult environment in which to grow margins.

Many companies describe getting into the big box stores as a “deal with the devil.” They pick up a massive amount of merchandise orders, far more than they could possibly find on their own. But they also find their once-innovative products turned into commodity items, making sourcing and manufacturing decisions much more important for profitability than the creativity that got them there in the first place.

I’d like to see Tattooed Chef succeed, and I’d never even consider selling the stock short. Ask the hedge funds that lost billions in January on Gamestop (GME) short positions how fun it is to be on the wrong side of a meme-stock rally.

As an investment based on fundamentals however, there are a lot better value propositions than $18 shares of Tattooed Chef at a forward P/E ratio of 250X.

Infrastructure Stock Boom to Sweep America A massive push to rebuild the crumbling U.S. infrastructure will soon be underway. It’s bipartisan, urgent, and inevitable. Trillions will be spent. Fortunes will be made. The only question is “Will you get into the right stocks early when their growth potential is greatest?” Zacks has released a Special Report to help you do just that, and today it’s free. Discover 7 special companies that look to gain the most from construction and repair to roads, bridges, and buildings, plus cargo hauling and energy transformation on an almost unimaginable scale. Download FREE: How to Profit from Trillions on Spending for Infrastructure >>