Is the Earnings Picture Really That Strong?

The narrative about the Q1 earnings season is one of all-around strength. But you wouldn’t see evidence of this strength in the stock market’s recent performance. The major indexes haven’t done much since the start of the year and performance since this earnings season got underway has hardly budged.

The chart below shows the performance of the S&P 500 index and the Nasdaq Composite since the April 13th earnings release from JPMorgan (JPM - Free Report) .

We need to lean on uncertainty about trade, the evolving inflation picture and geopolitics to explain a big part of the lack of follow through in the market, but we can cite some chinks in the earnings armor as well.

We should keep in mind that while earnings have been very strong, a lot of that strength was already expected and didn’t surprise many in the market. The fact is that the earnings picture had been steadily improving since the second half of 2017 and in some respects the 2017 Q4 earnings season was actually a lot stronger than what we are seeing companies report this earnings season.

You can see this in the almost no change to aggregate 2018 Q2 estimates as the chart below shows: 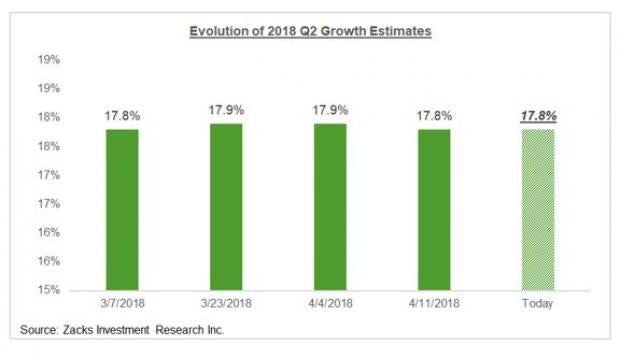 Disappointingly, we are not seeing that with estimates for Q2, as the above chart shows. In other words, market participants are justifiably skeptical about the magnitude and direction of marginal change in earnings expectations.

This skepticism likely gets reinforced by the recent uptrend in the exchange value of the U.S. dollar, which is now at its highest point this year on a trade-weighted basis. With about 40% of S&P 500 earnings coming from beyond the U.S. borders, this emerging strength in the U.S. dollar is a net negative for earnings outlook. Some folks are pointing to signs of softness in the global economic outlook, which undercuts the narrative of synchronized global growth that has been so central to the earnings turnaround.

The chart below shows 2018 Q1 earnings growth expectations contrasted with what is expected in the following three quarters and actual results in the preceding 5 quarters: 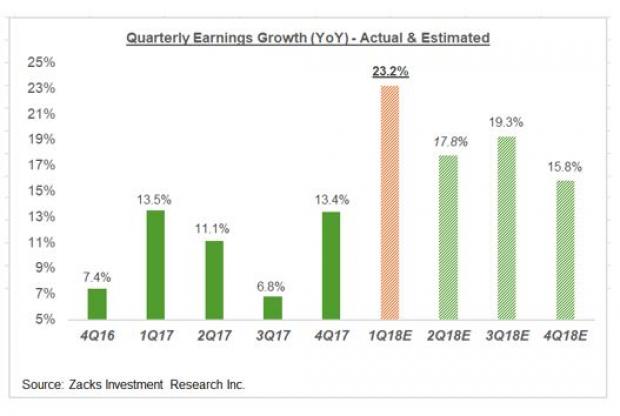 As you can see, growth in Q1 is very strong. In fact, the Q1 earnings growth is the strongest in more than 7 years. But markets are forward-looking systems and while the growth picture in the current and coming quarters is pretty good, it isn’t getting any better. If anything uncertainty about the dollar and global growth represent a question mark over expectations for the coming periods.

Q1 Earnings Season Scorecard (as of Friday, May 4th)

Total earnings for the 409 S&P 500 members that have reported results already are up +24% from the same period last year on +9.3% higher revenues, with 78% beating EPS estimates and 75.6% beating revenue estimates. The proportion of companies beating both EPS and revenue estimates is 63.3%.

To put these results in a historical context, the charts below compare the results thus far with what we had seen from the same group of 409 index members in other recent periods:

Earnings and revenue growth rate and the proportion of positive EPS surprises is tracking above what we have been seeing from the same group of 409 index members. But revenue surprises are tracking modestly below the preceding earnings season, but remain above historical periods.

For the Tech sector, we now have Q1 results from 83.1% of the sector’s total market cap in the S&P 500 index. Total earnings for these Tech companies are up +29.6% from the same period last year on +12% higher revenues, with 90.9% beating EPS estimates and 93.2% beating revenue estimates.

The comparison charts below put the sector’s Q1 performance thus far in a historical context:

Looking at Q1 as a whole, combining the actual results that have come out with estimates for the still-to-come companies, total earnings for the S&P 500 index expected to be up +23.2% from the same period last year on +8.7% higher revenues. This would follow the +13.4% earnings growth on +8.1% revenue growth in the 2017 Q4 earnings season.

The table below shows the summary picture for 2018 Q1, contrasted with what was actually achieved in the preceding period: 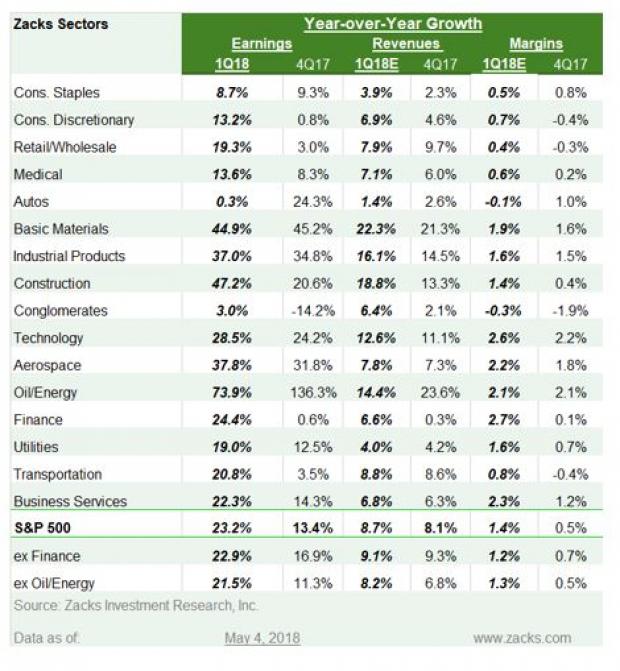 As you can see, the Energy sector remains a big growth contributor in Q1, with total earnings for the sector expected to be up +73.9% from the year-earlier period on +14.4% higher revenues. But growth for the quarter would still be in double-digits even on an ex-Energy basis (last row in the table above).

What is driving the strong Q1 growth isn’t the Energy sector, but rather the breadth of growth across all sectors, with double-digit earnings growth for 13 out of the 16 Zacks sectors, including Technology and Finance.

Can Retail Stocks Maintain Their Momentum?