That was an outstanding earnings season with more than 85% of S&P companies beating earnings expectations and over 75% topping revenue forecasts. With most of it now behind us, it’s a good time to revisit the EPS Growth, Revisions and Positive Surprises screen.

The end of earnings season highlights the hottest stocks in the market that are enjoying upward momentum RIGHT NOW with a good chance of continuing to outperform moving forward.

Below are three names that recently passed this screen by securing a high Zacks Rank with upward earnings estimate revisions and positive surprises. Two of them are some of the biggest retailers in the world, while the third is an innovative name that operates in one of the brightest spots in the market.

It’s all over for home improvement companies, right? Now that the pandemic is on its last legs and things are finally beginning to open up, people are just going to leave their places to the termites and get “back to normal”. They’re certainly not going to take advantage of the lowest interest rates in history to buy a new home. Right?

The recent earnings report from Home Depot (HD - Free Report) suggests that’s wrong… very wrong. The company’s fiscal first quarter report was one of the biggest releases in an extremely strong earnings season. In fact, analysts currently expect earnings growth of nearly 6% for next fiscal year, which is really saying something for companies that performed well during the pandemic.

HD is the world’s largest home improvement specialty retailer with more than 2,000 stores across the globe. It serves Do-It-Yourself (DIY) customers, Do-It-For-Me (DIFM) customers and Professional customers. The shutdown and historically low interest rates have benefited its DIY and Pro categories.

Shares of HD are up more than 32% over the past 12 months, including 21% this year alone. It has beaten the Zacks Consensus Estimate for four straight quarters with an average surprise of 9.9%.

The recent report included earnings per share of $3.86, which was more than 85% better than the previous year and ahead of expectations by 27%. Net sales of $37.5 billion improved nearly 33% from last year and surpassed the Zacks Consensus Estimate of $34.9 billion. Comparable sales were up 31%.

In addition to continued strong demand for home improvement projects, the company has really benefited from its ‘One Home Depot’ investment plan. The initiative focuses on expanding supply chain facilities, technology investments and enhancements to the digital experience. All of this certainly came in handy during the pandemic. 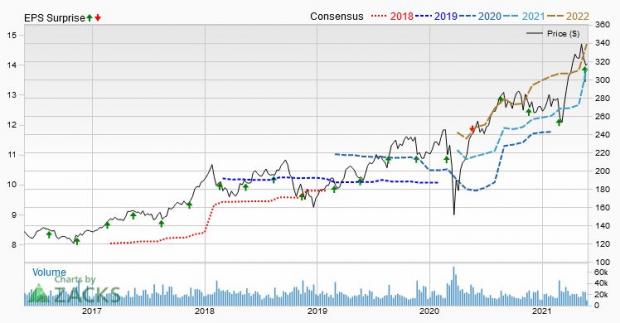 The market was being a real jerk this earnings season. It just sat there with arms folded (figurately speaking of course) while strong report after strong report was released. A company had to get a positive reaction, which is exactly what Target (TGT - Free Report) did with its fiscal first quarter report. You could say that it hit a bullseye… get it?

TGT was one of the brick-and-mortar companies that really showed how to compete with a gamechanger like AMZN and other e-tailers. The company turned itself into an omni-channel entity and was perhaps the best at embracing the future by moving into digital.

These days, the company is making investments in technologies, improving its websites and modernizing its supply chain to stay up-to-date in the new world of retail. And its fiscal first-quarter report showed that it’s succeeding as it gained more than $1 billion in market share!

Earnings per share of $3.69 destroyed last year’s 59 cents and soared past the Zacks Consensus Estimate by more than 63%. TGT has now beaten our expectations for nine straight quarters with a positive surprise of 62% over past four.

Total revenues of $24.2 billion were up more than 23% from the previous year and topped our forecast of $22.3 billion. Perhaps more importantly, comparable sales jumped 22.9%, including store comparable sales up 18% and digital comparable sales surging 50%. TGT is a big beneficiary of the economic re-opening and the stimulus checks.

And here’s how you can tell the market really liked those numbers. Shares of TGT soared 6% after the report! That was almost unheard-of this season, but goes to show how the company’s omni-channel capacities, diversified assortment and flexible format stores are really impressing analysts and investors alike. 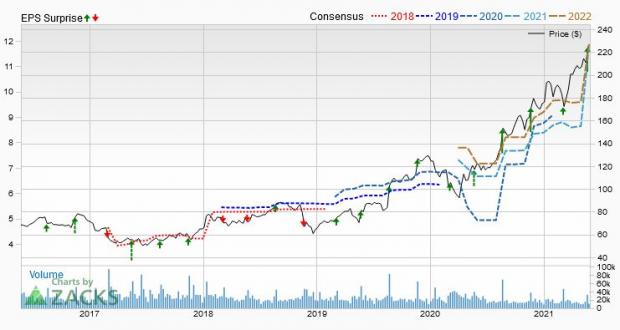 Saving the world can also be profitable for an investor's portfolio. That’s what Daqo New Energy Corp. (DQ - Free Report) showed in its recent first-quarter report, which saw revenue soar more than 50% year over year as a shortage in polysilicon led to higher average selling prices.

DQ manufactures and sells high-quality polysilicon to solar companies. Polysilicon is the raw material that’s used in the photovoltaic industry. Its processed into ingots, wafers, cells and modules. With seemingly every country setting carbon neutrality goals, it’s no wonder this stuff is in such high demand.

Shares of DQ have soared approximately 600% over the past 12 months, including a rise of 30.4% so far this year. It’s first-quarter report from last week reflected the potential that investors and analysts are seeing in this name.

The company reported earnings per share of $1.08, which more than doubled the previous year’s 44 cents and topped the Zacks Consensus Estimate by more than 21%. Revenues of $256.1 million jumped 52% from last year and was also ahead of our expectation at $242.8 million.

The improved sales were attributed to a higher ASP amid strong customer demand for high-purity polysilicon. The ASP was $11.90 per kg, which was up 35%. Meanwhile, polysilicon production volume was up 2% to 20,185 metric tons, while sales volume increased 12% to 21,471 MT.

For the full year, DQ expects production volume between 81K and 83K MT. It should see benefits from its new digital manufacturing system, which was put in place to stabilize production, maximize output and optimize efficiency.

The Zacks Consensus Estimate for this year is up 61.4% over the past 60 days to $8.44, while next year has climbed 62.4% in that time to $9.97. Therefore, analysts currently expect a year-over-year improvement of 18.1%, which shows that analysts see a lot of bright spots for this company moving forward. 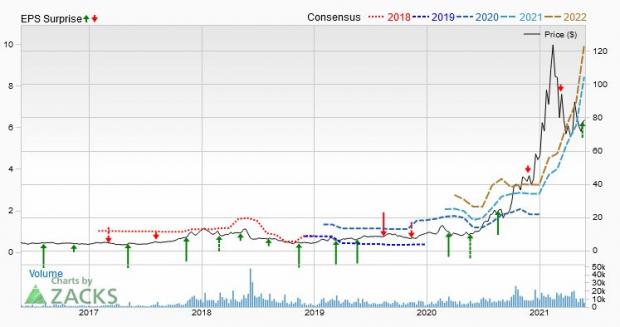