It’s a great time to be a financial institution. General market conditions are favorable. Transaction volumes are rising, Investment Banking and Trading revenues have been solid. Analysts and investors are snapping up the shares of strong financial institutions and making them the foundation of diversified portfolios during an economic expansion that shows no sign of slowing.

Sometimes it’s easy to see all the members of a given industry or sector as essentially interchangeable. When things are good, the rising tide lifts all boats, or so the thinking goes.

That can be a big mistake however, and today’s Bear of the Day is a good example of a financial stock that’s less attractive than most of its peer group.

Nomura Holdings (NMR - Free Report) is the largest securities brokerage and asset management business in Japan. You’ve probably heard the name in the news recently because of the bank’s involvement in the Archegos incident earlier in 2021 in which a previously little-known hedge fund manager suffered somewhere in the area of $20 billion in losses on heavily leveraged positions.

After a series of cascading losses that sent many banks scrambling to cut positions and mitigate losses, Nomura was directly facing losses in the area of $2 billion. That’s a huge number of course, but drawdowns like that aren’t totally unheard of at big banks. Nomura takes in between $13 and $14 billion in annual revenues. The loss hurts, but it’s not the end of the world.

What’s more concerning is how they got into that position in the first place and the effect that the incident could have going forward. Competition for the business of big clients like Bill Hwang of Archegos can be quite stiff. Smaller institutions can sometimes attract that lucrative business by exercising less stringent due diligence and risk control.

The fact that Nomura found themselves with that much exposure to a trader who was leveraged 5-8X at multiple institutions suggests that the bank may have been lenient in order to collect Hwang’s lucrative fee income. An independent review of Nomura’s risk management practices is ongoing, but regardless of the results, it’s almost certain that they will be living in an environment of lower risk appetite for the foreseeable future.

That’s a vicious circle for banks – they stretch their risk-tolerance to collect additional revenue, but if the additional risk results in trading losses, they are forced to tighten up risk controls and lose out of potential future revenues.

Nomura’s share price fell precipitiously after the Archegos blowout, so it could be argued that the current price already reflects the reduced earnings estimates that earns the bank a Zacks Rank # 5 (Strong Sell). 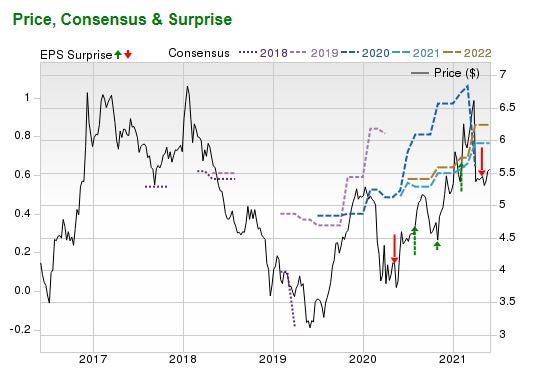 There may be another shoe to drop, however. Nomura has a very reasonable price to tangible book ratio and pays a healthy dividend. Those two factors have prevented the share price damage from being much worse. The dividend is far from certain, however. Currently yielding almost 6% annually at the recent share price, the markets seem to be pricing in a real chance of a dividend cut.

If there were to be an official announcement about a dividend cut from Nomura, it’s easy to see the shares taking another leg lower.

In the Financial Services industry, investors would be wiser to stick with firms like Wells Fargo, a Zacks Rank #1 (Strong Buy) or JP Morgan, a Zacks Rank #2 (Buy) than they would be simply crossing their fingers and hoping for a little extra income that may never materialize.