Normalization of monetary policy by some central banks across the globe should keep the momentum alive in the foreign banking space, which ended 2017 with a decent recovery. However, near-term growth prospects of foreign banks are being called into question because of the weak recovery witnessed by banks in the advanced nations (except the United States) and continued trouble faced by banks in some of the emerging economies.

Monetary policy normalization varies across nations, with the advanced nations — which are homes to a number of major foreign banks — specifically lagging. The central banks of these economies are yet to take interest rates to a level that could benefit their commercial banks.

On the other hand, while central banks in some nations are gearing up to raise interest rates, this may act against the sustainability of economic growth that the world has been witnessing. And any sluggishness in global economic growth could dampen the prospects for increasing banking activities.

Looking at shareholder returns over the past year, it appears that the border economic recovery wasn’t enough for enhancing investors’ confidence in the industry’s growth prospect. Moreover, any improvement shown by these banks wasn’t enough to shift investors’ focus from their U.S. counterparts that have been thriving with ample support from the domestic operating and policy environment.

The Zacks Foreign Banks Industry, which is a 70-stock group within the broader Zacks Finance Sector, has underperformed both the S&P 500 and its own sector over the past year.

While the stocks in this industry have collectively gained 4.9%, the Zacks S&P 500 Composite and Zacks Finance Sector have rallied 12.6% and 10%, respectively. 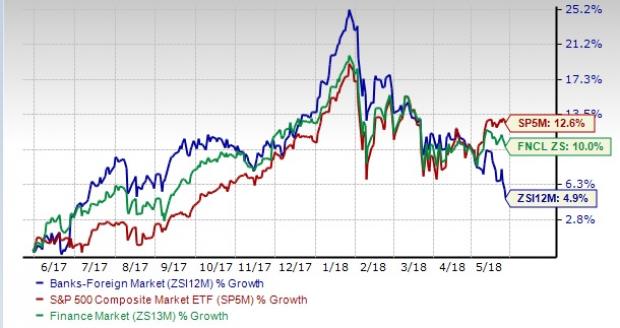 However, it’s worth noting that there was a significant lack of synchronization in the performance of individual stocks within the group. While the stocks for some banks domiciled in Brazil, Canada, Chile and the U.K. outperformed the broader market, massive decline in prices of some stocks for banks based in Argentina, Mexico, Germany and China primarily affected the group’s returns. Troubled economic conditions in Argentina, Mexico, Germany and China made investors jittery enough to exit bank stocks that are potentially risky.

Thanks to the underperformance of the industry over the past year, the valuation looks really cheap now. One might get a good sense of the industry’s relative valuation by looking at its price-to-tangible book ratio (P/TBV), which is the most appropriate multiple for valuing banks because of large variations in their earnings results from one quarter to the next.

This ratio essentially measures a bank's current market value relative to what it would be worth if all assets were sold, debt was paid, and intangible assets were written off.

The industry currently has a trailing 12-month P/TBV ratio of 1.36, which is the lowest level over the past year. When compared with the highest level of 2.13 and median level of 1.87 over that period, there is apparently plenty of upside left.

The space also looks inexpensive when compared with the market at large, as the trailing 12-month P/TBV ratio for the S&P 500 is 9.91 and the median level is 9.41.

As finance stocks typically have a lower P/TBV ratio, comparing foreign banks with the S&P 500 may not make sense to many investors. But a comparison of the group’s P/TBV ratio with that of its border sector ensures that the group is trading at a decent discount. The Zacks Finance Sector’s trailing 12-month P/TBV ratio of 2.72 and the median level of 3.55 for the same period are way above the Zacks Foreign Banks Industry’s respective ratios.

Underperformance May Continue Due to Bleak Earnings Outlook

Expectations of improving profit margins with lessening policy difficulties in some economies and increasing demand from relatively less-levered consumers and businesses should help foreign bank stocks continue generating positive shareholder returns in the near future.

But what really matters to investors is whether this group has the potential to perform better than the broader market in the quarters ahead. While the above ratio analysis shows that there is a solid value-oriented path ahead, one should not really consider the current price levels as good entry points unless there are convincing reasons to predict a rebound in the near term.

One could get a good sense of a company’s earnings outlook by comparing the consensus earnings expectation for the current financial year with the last year’s reported number, but an effective measure could be the magnitude and direction of the recent change in earnings estimates.

While the consensus earnings estimate for the Zacks Foreign Banks industry of $1.21 per share implies a decent year-over-year improvement, the trend in earnings estimate revisions has not been favorable lately.

Looking at the aggregate earnings estimate revisions, it appears that analysts are losing confidence in this group’s earnings potential.

The consensus EPS estimate for the current fiscal year has been revised 2.5% downward since Mar 31, 2018.

The group’s Zacks Industry Rank, which is basically the average of the Zacks Rank of all the member stocks, indicates continued underperformance in the near term.

The Zacks Foreign Banks industry currently carries a Zacks Industry Rank #224, which places it at the bottom 13% of more than 250 Zacks industries. Our research shows that the top 50% of the Zacks-ranked industries outperforms the bottom 50% by a factor of more than 2 to 1.

Our proprietary Heat Map shows that the industry’s rank has continually deteriorated over the past five weeks.

While the near-term prospects look unwelcoming for investors, the long-term (3-5 years) EPS growth estimate for the Zacks Foreign Banks industry appears promising. The group’s mean estimate of long-term EPS growth rate has been increasing since January 2018 to reach the current level of 12.5%. This compares to 9.7% for the Zacks S&P 500 composite.

In fact, the basis of this long-terms EPS growth could be the recovery in top line that banks have been showing since the beginning of 2016.

Another important indication of solid long-term prospect is the improvement in the group’s return on equity (ROE), which is a key metric for evaluating bank stocks.

While the advanced nations (except the United States) are yet to make the backdrop favorable for their banks, nothing dissimilar is expected from the emerging economies. In fact, a stronger dollar and rising U.S. Treasury yields have been putting pressure on some of the emerging economies and could spread across the others too.

The industry might not be able to tide over the broader challenges in the near term. So it may not be a good idea to bet on this space right now. However, keeping the long-term expectations in mind, investors could take advantage of the cheap valuation and bet on a few foreign bank stocks that have a strong earnings outlook.

While none of the stocks in our foreign banks universe currently hold a Zacks Rank #1 (Strong Buy), below are three stocks that have been witnessing positive earnings estimate revisions and carry a Zacks Rank #2 (Buy).

Banco de Chile (BCH - Free Report) : The stock of this Santiago, Chile-based bank has gained 26.9% over the past year. The Zacks Consensus Estimate for the current-year EPS has been revised 1.1% upward over the last 60 days.

The Bank of N.T. Butterfield & Son Limited NTB: The consensus EPS estimate for this Hamilton, Bermuda-based bank has moved 4.1% higher for the current fiscal year, over the last 60 days. The stock has rallied 44.7% over the past year.

Mitsubishi UFJ Financial Group, Inc. MUFG: The stock of this Tokyo, Japan-based bank has produced marginal returns over the past year. The consensus EPS estimate for the current year has been revised 2.8% upward over the last 60 days.