We still have a few more weeks to go before the big banks start reporting June-quarter results. But the Q2 reporting cycle has (officially) gotten underway, with results from 9 S&P 500 members already out. All of these early earnings releases are from companies that have fiscal quarters ending in May, but these get counted as part of the June-quarter tally.

We have another 11 index members with fiscal quarters ending in May on deck to report results this week. All in all, we will have seen such Q2 results from almost two dozen S&P 500 members by the time JPMorgan (JPM - Free Report) , Wells Fargo (WFC - Free Report) and Citigroup (C - Free Report) (unofficially) kick-off this earnings season on July 13th.

The notable earnings reports coming out this week include:

Lennar (LEN - Free Report) reports on Tuesday (6/26) before the market’s open, with the homebuilder expected to earn $0.45 per share in earnings on $5.23 billion in revenues, which compares to $0.91 per share on $3.26 billion in revenues in the year-earlier period. The stock was up big following the last earnings release, but overall it has been a tough period for Lennar shares as well as the broader homebuilder space.

Lennar shares are currently trading close to 52-week lows and are now down -18.8% since the start of the year, underperforming the Zacks Construction sector’s -8.1% year-to-date decline vs. the S&P 500 index’s +4% gain. KB Home (KBH - Free Report) , which is scheduled to report results Thursday morning (06/28) is down even more than Lennar (down -19.9% YTD).

General Mills (GIS - Free Report) reports on Wednesday (6/27) morning, with the company expected to earn $0.75 per share on $3.91 billion in revenues, which compares to $0.73 per share on $3.81 billion in revenues in the year-earlier period. Estimates have come down a bit in recent days and the stock has lost ground following each of the last two earnings reports. The stock was down big in the run up to and the day of the last earning release on March 21st and has essentially remained flat since then. General Mills shares are currently down -22.3% since the start of the year, underperforming the struggling Consumer Staples sector’s -10.3% year-to-date decline.

Nike (NKE - Free Report) reports after the market’s close on Thursday (6/28), with the company expected to earn $0.64 in EPS on $9.39 billion in revenues, which compares to $0.60 EPS on $8.68 billion in revenues in the year-earlier period. The stock was down following each of the last three earning releases, but has been an impressive performer this year, outperforming the Zacks Consumer Discretionary sector as well as the broader market. Nike shares are currently trading close to their 52-high and are up +18.6% vs. the Consumer Discretionary sector’s +4.7% year-to-date period.

Accenture (ACN - Free Report) will report before the market’s open on Thursday (6/28), with the company expected to earn $1.71 per share in earnings on $10.02 billion in revenues, up +12.5% and +13% from the year-earlier period, respectively. Accenture has been spotlighting its opportunity in the digital, cloud and security areas in recent quarters and revenues from those areas should show strong momentum in this release as well. Management’s commentary about technology spending trends typically has read through for IBM (IBM - Free Report) and Hewlett Packard Enterprise (HPE - Free Report) . The stock was down big following the last quarterly release on March 22nd, but has recovered since then and is currently up +4.9% in the year-to-date period.

The chart below plots the evolution of Q2 earnings growth expectations. As you can see, the growth rate has ticked up a bit, partly reflecting results from the 9 S&P 500 members that have reported results already. But even after accounting for the results that have come out, Q2 estimates revisions are nowhere near the impressive positive revisions we saw ahead of the start of the Q1 earnings season. 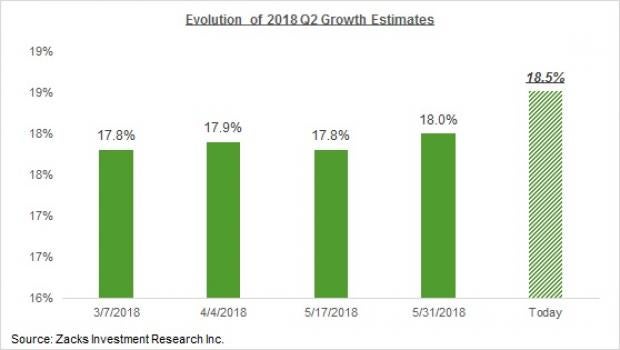 But as the chart above shows, we didn’t see much in positive revisions. In other words, while the overall growth picture remains very strong – there is no other way to describe +18.5% quarterly earnings growth - there is not much improvement in expectations for Q2 and beyond. The recent strength in the exchange value of the U.S. dollar and questions about global growth will likely serve as incremental negatives for folks like us monitoring the aggregate revisions trend.

This flattish aggregate revisions trend notwithstanding, June quarter estimates have actually modestly ticked down for 9 of the 16 Zacks sectors and gone up for 7 sectors. The sectors enjoying positive revisions in the aggregate include Technology, Energy, Medical, Industrial Products, Basic Materials, Business Services, and Retail. Estimates have gone up the most for the Energy sector, reflecting momentum in oil prices. Excluding the gains made in the Energy sector, the aggregate revisions picture for the S&P 500 index would be in negative territory. 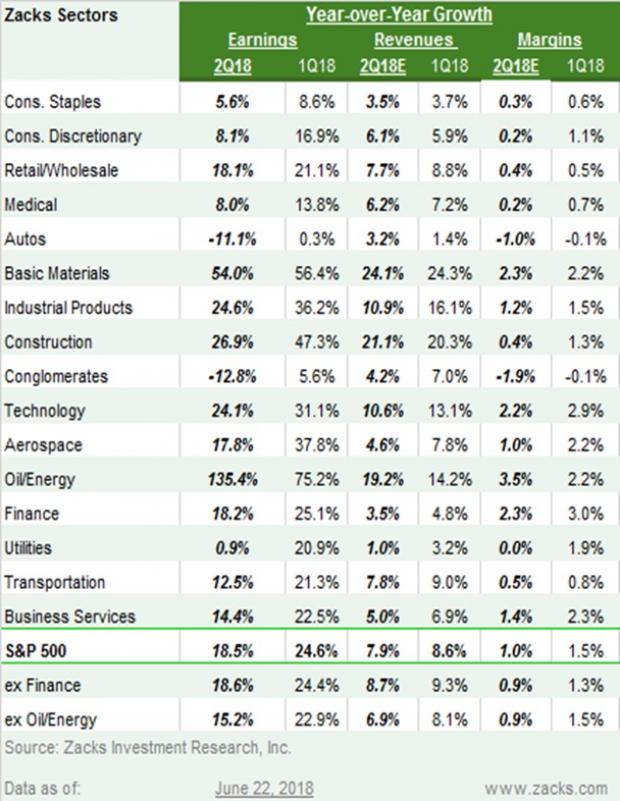 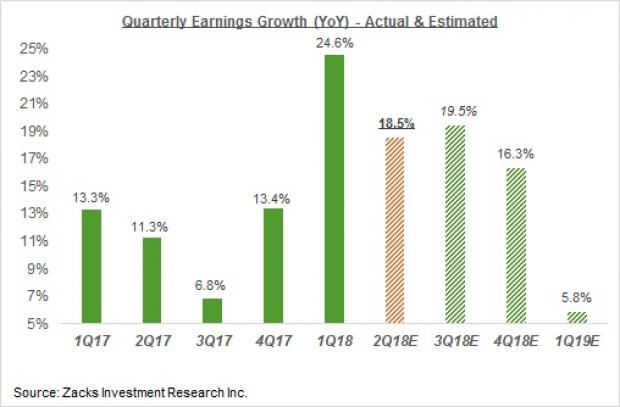 Please note that while the Q2 growth pace represents a deceleration from the preceding quarter’s impressive level, the overall level of total earnings is in record territory, as the chart below shows. 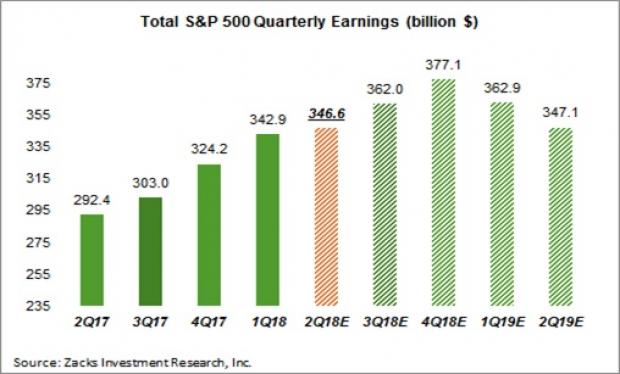 The two charts above provide different answers to the ‘peak earnings’ question. The first chart shows that the growth rate likely peaked in 2018 Q1, while dollar earnings aren’t expected to ‘peak’ till the last quarter of 2018. Even with respect to the growth rate, it is very much possible that final growth rates for Q2 and Q3 may surpass what we saw in Q1.

We should keep in mind that this earnings cycle got underway back in 2009 when the U.S. economy got out of its last recession. By this time, earnings growth should have come down to the historical ‘normalized’ pace in the mid-single digits level. The reason we have these impressive growth numbers and positive revisions trend is thanks mostly to the effect of the tax cuts, which will start wearing off towards the end of 2019.

Here is a list of the 36 companies including 11 S&P 500 and reporting this week.