The Zacks Rank is one of the best stock rating systems out there, but at any given time there are hundreds of names with a Zacks Rank #1 (Strong Buy) or Zacks Rank #2 (Buy).

You can’t buy them all.

That’s where the Zacks Style Scores come in. These indicators help to narrow down that long list of stocks to increase your odds of success. They’re split into Value, Growth and Momentum scores, depending on what kind of investor you are.

That’s the focus of the Top VGM Buys screen.

In addition to the Zacks Rank and VGM, the screen also looks for stocks in the top 50% of the Zacks Industry Rank as well as several other criteria.

There’s more than enough demand for lumber, power tools and grills out there to support two home improvement giants. We knew Lowe’s (LOW - Free Report) was going to release a strong first-quarter report in mid-May, because its biggest rival Home Depot (HD) unleashed one of the more impressive reports of the season just a day earlier. There’s certainly enough room in this town for both of these behemoths.

The companies are capitalizing on an unprecedented one-two punch. They’re benefitting from a healthy home construction market brought on by the most dovish Fed in history. And at the same time, they’re getting a boost from an historic focus on the home brought on by social distancing. As a result, the Building Products – retail space is in the top 31% of the Zacks Industry Rank.

Lowe’s may be the second biggest home improvement retailer out there, but it still operates nearly 2000 stores across the U.S. and Canada. Shares are up more than 47% over the past 12 months and about 19% so far this year. And its ability to beat the Zacks Consensus Estimate is second to none. It has topped expectations for eight straight quarters now.

Most recently, LOW reported fiscal first quarter earnings per share of $3.21, which surged 81% from the previous year and easily eclipsed our expectations by more than 24%. Net sales of $24.4 billion jumped more than 24% year over year and was better than the Zacks Consensus Estimate at $23.7 billion.

The company enjoyed solid growth across its merchandise segments and geographies. But we can’t discount its improved omni-channel capabilities, which have been nothing short of essential during the pandemic. Sales at Lowes.com soared 36.5% in the quarter, which represents 9% sales penetration and a two-year-comp of 146%.

So despite the pandemic being a thing of the past next year, analysts still expect profit growth for LOW. 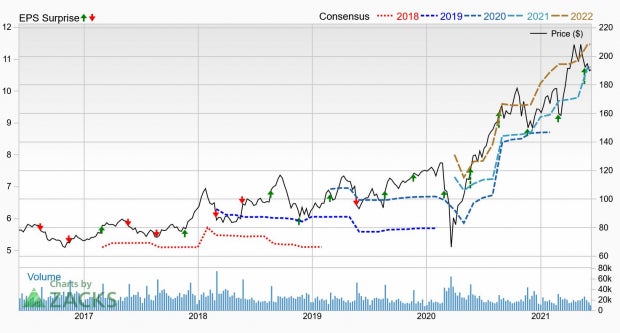 If people re-focused on the home during this pandemic, then it only makes sense that they would also put a new focus on their vehicles. Autos are major investments too, especially if you’re one of those RVers who take home on the road with you.

As a result, the automotive – replacement parts space is in the top 37% of the Zacks Industry Rank. And one of this area’s biggest names is LKQ Corporation (LKQ - Free Report) . The company is a leading provider of replacement parts, components and systems used to repair and maintain vehicles. It’s three reportable segments are Europe (47.2% of revenues in 2020), North America (39.8%) and Specialty (13%).

Shares of LKQ are up more than 75% over the past 12 months, including over 40% so far in 2021. It has beaten the Zacks Consensus Estimate for nine straight quarters now and amassed an average surprise of more than 97% over the past four.

The first quarter included adjusted earnings per share of 94 cents, which was 65% better than the previous year and more than 49% atop the Zacks Consensus Estimate. Revenues of nearly $3.2 billion were up 5.7% from last year and eclipsed our expectations of around $2.95 billion.

LKQ is all about strategic buyouts, which it has done very successfully over the years. Most recently, the company acquired Green Bean Battery LLC, which specializes in hybrid batteries. Financial terms have not been released yet, but the company stated that “battery reconditioning represents a natural extension of our current powertrain remanufacturing operations”. Other recent buyouts include Elite Electronics and Greenlight Automotive.

LKQ now expects adjusted earnings per share of $3 to $3.20 for 2021, which is up from the previous forecast of $2.65 to $2.85. Raised outlooks are still rare as we emerge from the pandemic, so analysts really appreciated the news.

The Zacks Consensus Estimate for this year is now at $3.10, which marks an 11.9% improvement over the past 60 days. Expectations for next year are up to $3.33, which has improved 8.5% over that time while also suggesting year-over-year improvement of 7.4%. 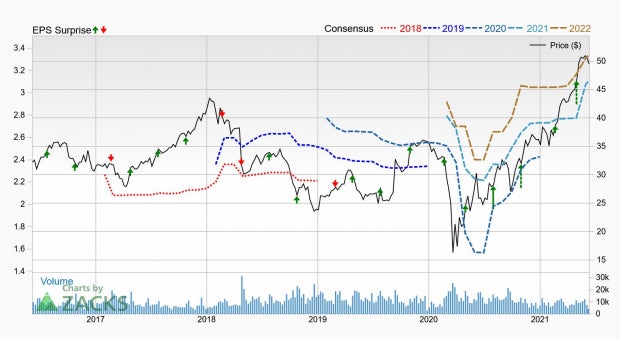 Vehicles are pretty hot across the pond now too with the Automotive-Foreign space in the top 40% of the Zacks Industry Rank. A big player out that way is London-based CNH Industrial N.V. (CNHI - Free Report) , which makes vehicles for agricultural and industrial purposes.

Shares of CNHI soared nearly 140% over the past 12 months, including a gain of about 39% this year alone. It has put together four straight quarters of positive surprises that have amassed an average surprise of 176% in that time.

The most recent beat was 113%, as earnings per share of 32 cents easily trounced the Zacks Consensus Estimate of 15 cents in its first quarter. The result compared to a loss of 6 cents in the previous year. Revenue of $7.47 billion jumped nearly 37% year over year and, more impressively, beat our expectations by a full 10.2%.

Meanwhile, CNHI is in the middle of a five-year business plan called Transform 2 Win, which is aimed at operational efficiency through targeted restructuring efforts in order to boost profits and streamline the business.

The Zacks Consensus Estimate for this year is now $1.13, which has jumped 45% over the past 60 days. Likewise, next year’s expectation of $1.36 has gained 40% in that time and suggests year-over-year improvement of more than 20%. 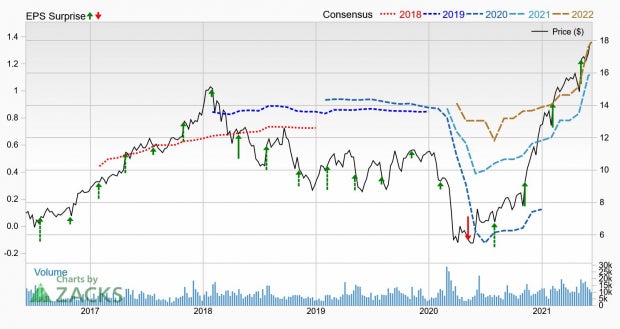 Zacks has released a special report to help you capitalize on the Internet of Things’s exponential growth. It reveals 4 under-the-radar stocks that could be some of the most profitable holdings in your portfolio in 2021 and beyond.
Click here to download this report FREE >>

Crocs and 4 Other Lifestyle Stocks to Buy on Earnings Momentum