Picking stocks when the market is around record highs is easy, right? Well, it always seems to be when you think about it, but things like this pandemic, earnings season, rising inflation and the Fed tend to make things more unpredictable than you could have ever imagined.

The best way to improve your odds for success is to find names with several characteristics moving in the right direction. Rising earnings estimates is great, but it’s even better if broker ratings and price momentum are trending upward as well. And let’s throw a low price-to-sales ratio in there too.

The Increasing Estimates, Ratings & Prices screen looks for all of that. Below are three stocks that recently passed the test. Make sure to click here for the full list to see all the names.

You might think that the pandemic-era standards of online buying would not apply to bigger ticket items like automobiles. What are you going to do? Shop and buy your car online and then go pick it up on the curb like a pizza? Well, as far as CarMax (KMX - Free Report) is concerned, the answer is YES! It’s just like that… with maybe a little more paperwork.

The company recently reported its sixth straight positive surprise, thanks in large part to an omni-channel experience that includes ship-to-home next day service, curb-side pick-up, ecommerce and store pick-up. Does this sound familiar?

KMX operates as a specialty retailer of used and new vehicles. Actually, it’s one of the largest retailers of used vehicles in the country. It operates under two reportable segments: CarMax Sales Operations and CAF (CarMax Auto Finance). Shares are up more than 40% so far this year.

The above-mentioned omni-channel experience and diversified business model led to record profitability and net revenues in its recently-reported fiscal first quarter. KMX reported earnings per share of $2.63, which beat the Zacks Consensus Estimate by more than 63% and brought the four-quarter average surprise to nearly 42%.

Revenues reached $7.7 billion in the quarter, easily eclipsing the Zacks Consensus Estimate of $6.2 billion. It also improved 138% from the previous year. KMX sold over 452,000 units through its retail and wholesale channels combined, which was up 128% from the previous year. It also bought more than 341,000 vehicles, or 236% more than the prior year.

And the company isn’t done. Early last month, KMX acquired Edmunds, the online guide for automotive information and a leader in digital car shopping innovations. The move will enhance its digital capabilities and bolster its long-term prospects. 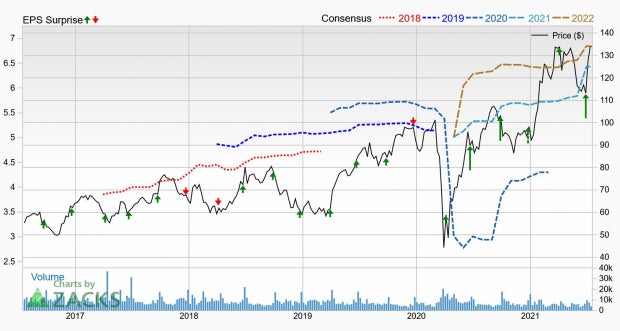 We’ll probably hear about more raised outlooks this earnings season since the pandemic is finally losing its grip. Jabil (JBL - Free Report) has already set the tone by raising its financial outlook for the rest of the year while reporting a solid fiscal-third-quarter performance a month ago. Since that announcement, earnings estimates and shares have been on the rise.

JBL is one of the largest global suppliers of electronic manufacturing services (EMS). More specifically, it offers electronics design, production, product management and after-market services to numerous markets, including aerospace, automotive, defense, medical and telecom, among others.

JBL showed continued end-market strength and solid operational execution. It enjoyed top-line growth in mobility, cloud-connected devices and semi-cap. These factors have the company feeling very confident for the future, which led to its fiscal 2021 outlook being raised to core EPS of $5.50 on revenue of $29.5 billion.

Analysts showed their appreciation for the recent report and future potential by raising their earnings estimates. The Zacks Consensus Estimate for this year (ending August 2021) is $5.54, which is up 9.7% in the past 30 days. Expectations for next year (ending August 2022) have climbed 11% in that time to $5.95, which suggests year-over-year improvement of 7.4%. 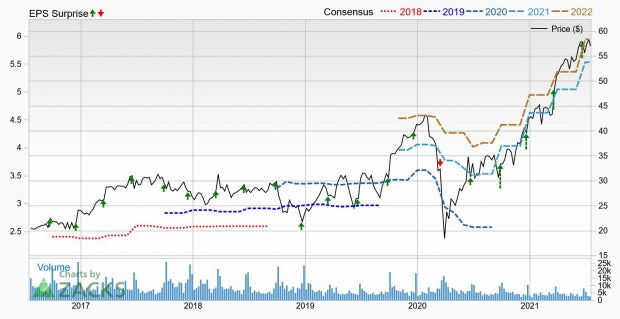 If you’re going to capitalize the word “smart” in your name, then you’d better have the numbers to back up such an audacious claim. And SMART Global Holdings (SGH - Free Report) certainly does! The company has beaten the Zacks Consensus Estimate for six straight quarters now and shares are up nearly 90% over the past 12 months.

Last week, SGH reported fiscal third quarter earnings of $1.39, which beat the Zacks Consensus Estimate by more than 26%. Sales of $437.7 million were up more than 50% from last year. That marks a quarterly revenue record and was the first quarter with Cree LED under the company’s umbrella after completing the acquisition on March 1.

SGH expects fourth-quarter net sales between $440 million and $480 million with non-GAAP earnings per share of $1.60.

Since the report, analysts have been raising their expectations for SGH. The Zacks Consensus Estimate for this year (ending August 2021) is now $4.65, which marks a more than 17% improvement over the past 30 days. Estimates for next year (ending August 2022) are up more than 13% in that time to $5.76, which suggests healthy year-over-year profit growth of practically 24%. 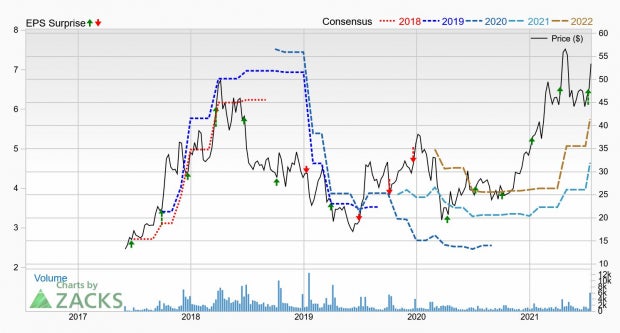