The Zacks Mining - Silver industry had been impacted by weak silver demand as the COVID-19 pandemic crippled the industrial sector last year. Although industrial activity had been recovering this year, which led to higher silver prices, the spread of the highly contagious Delta variant put a rein on this rally. This has triggered concerns that the global economic recovery could be derailed, which is weighing on silver prices.

The Zacks Mining - Silver industry comprises companies that are engaged in exploration, development, and production of silver. These include big and small players operating mines of widely varying types and scale. Silver-bearing ores are mined by open-pit or underground methods and then are crushed and ground. The miners continually search for opportunities to grow their reserves and resources through targeted near-mine exploration and business development. They strive to upgrade and improve the quality of their existing assets, internally and through acquisitions. Only 20% of silver comes from mining activities where silver is the primary source of revenues. The balance 80% comes from projects where silver is a by-product of mining other metals, such as copper, lead and zinc. Thus, several companies in the silver mining industry are engaged in mining for other metals as well.

Delta Variant Poses a Threat:  Silver’s unrivaled characteristics make it an indispensable component for several industrial products. With industrial applications accounting for roughly 60% of the global silver consumption, the pandemic-induced slowdown in the industrial sector last year severely impacted demand for silver. As businesses subsequently resumed operations, manufacturing activity has picked up globally over the past few months, fueling silver demand and supporting prices. However, silver has lost steam lately amid growing concerns about the highly transmissible Delta variant and impending fears that it might hamper industrial activity again. Silver prices have declined 3.25% so far this year. The industry players are currently facing escalating production costs including electricity, wages, water and materials. With no control over silver prices, the industry has to focus on improving sales volumes while being cost-effective. The companies are investing heavily in R&D and resorting to technological innovations targeted at nearly every level of operation to increase efficiency, sustain growth and keep costs low.

Supply at Risk:  In 2020, global silver mine production fell 5.9% to 784.4 million ounces —  marking the most significant drop in the last decade and also registering the fourth consecutive annual decline. This was primarily due to temporary mine closures at several major silver producing countries in the first half of 2020 due to the pandemic. The Silver Institute projects global silver mine production to increase 8% to 848.5 million ounces in 2021. This projection is based on the assumption that with the global vaccine roll-out, mines are likely operate at full capacity throughout the year, which will be the primary driver behind production growth. The spread of the Delta variant and slow pace of vaccine rollout in different countries puts this projection in jeopardy as these factors might result in the closure of mines again. On top of this, depleting ore reserves have been a major concern for the industry in the recent years.

Demand to Remain Strong for Years to Come: The ongoing revolution in green technologies, aided by exponential growth of new energy vehicles and investment in solar photovoltaic energy, will act as a major catalyst for silver going forward. Per the Silver Institute, silver consumption in the global automotive sector is expected to be reach 90 million ounces by 2025. The white metal’s use in 5G-infrastructure and upcoming intelligent electronics is likely to drive demand. Per the Institute, the printed and flexible electronics sector particularly holds promise and is projected to witness a robust growth of 54% to 74 million ounces in 2030 from 2021, consuming 615 million ounces of silver over the period. Jewelry fabrication, which accounts for approximately one-fifth of total silver demand, is expected to be a key catalyst. India is likely to emerge as a major consumer courtesy of increasing investor interest and growth in jewelry, decorative items and silverware fabrication. Silver serves as a safe haven asset in times of uncertainty.

The group’s Zacks Industry Rank, which is basically the average of the Zacks Rank of all the member stocks, indicates gloomy prospects in the near term. The Zacks Mining - Silver industry, which is an 11 stock group within the broader Zacks Basic Materials Sector, currently carries a Zacks Industry Rank #246, which places it at the bottom 2% of 256 Zacks industries. Our research shows that the top 50% of the Zacks-ranked industries outperform the bottom 50% by a factor of more than 2 to 1.

Despite the bleak near-term prospects, we will present a few Mining-Silver stocks that one can retain given their growth prospects. But it’s worth taking a look at the industry’s shareholder returns and current valuation first.

3 Mining-Silver Stocks to Keep an Eye On

Pan American Silver: This Vancouver, Canada-based company owns and operates silver and gold mines located in Mexico, Peru, Canada, Argentina and Bolivia. It is the second largest primary silver producer in the world and has the biggest silver reserve base globally. The company is an industry leader in high margin low cost production. The La Colorada mine in Mexico is expected to act as a catalyst with estimated 100.4 million tons of inferred mineral resources. The Navidad project in Argentina is also anticipated to be a growth driver going forward. It is one of the largest undeveloped primary silver deposits globally. The Escobel project in Guatemela is a large, already built silver mine with 264.5 million ounces of silver in reserves.

The Zacks Consensus Estimate for the company’s current-year earnings has moved up 6.5% over the past 60 days. The stock has a trailing four-quarter earnings surprise of 30%, on average. The company’s shares have declined 16.4% in the past year. It has a long-term projected earnings growth rate of 1.8%. The company carries a Zacks Rank #3 (Hold). You can see the complete list of today’s Zacks #1 Rank (Strong Buy) stocks here. 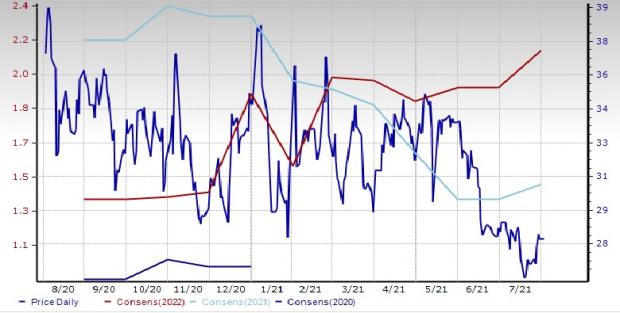 The company is well-poised for growth, backed by its solid capital structure with ample liquidity and a portfolio of base and precious metals. It has a solid pipeline of projects that will deliver growth in the long haul. The company embarked on a debottlenecking program last year to reduce costs at its direct operation mines. The program has driven impressive results in Tambomayo, where the company simplified the metallurgical process and optimized mine preparation. In Uchucchacua, it has improved efficiency in the underground mine. At El Brocal, it has increased production driven by operational improvements. Overall, the program has resulted in significant cost savings in each of its mines and led to higher EBITDA performance.

The Zacks Consensus Estimate for the company’s current-year earnings has moved up 16.7% over the past 60 days. The company’s shares have declined 15.5% in the past three months. It currently carries a Zacks Rank #3. 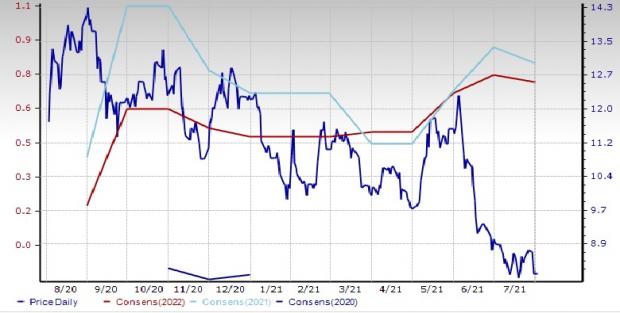 MAG Silver: Headquartered in Vancouver, Canada, MAG Silver engages in the exploration and development of silver mining properties. It also explores for gold, lead, and zinc deposits. It primarily holds 44% interest in the high-grade silver Juanicipio project located in the Fresnillo District, Zacatecas State, Mexico. The company is currently constructing and developing the surface and underground infrastructure on the property to support a 4,000 tons per day mining operation, with the operational expertise of its joint venture partner, Fresnillo plc (FNLPF - Free Report) . The Juanicipio Project is a robust, high-grade, high-margin underground silver project with low development risks.

The Zacks Consensus Estimate for earnings for fiscal 2021 has been revised upward by 9% over the past 60 days. Shares of the company have gained 5% over the past three months. The company currently carries a Zacks Rank #3. 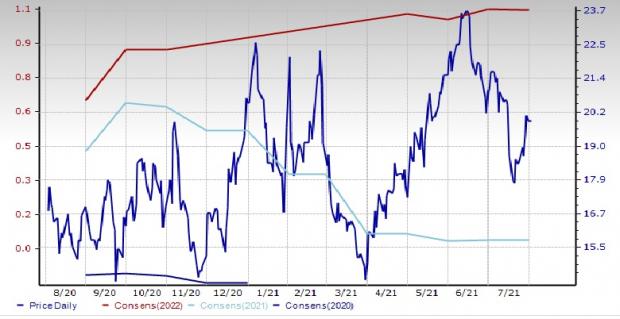