Bull of the Day: Apple (AAPL)

Apple (AAPL - Free Report) hasn’t needed an introduction in years, if not decades. The $2.4 trillion market cap firm’s Q3 FY21 results on July 27 highlighted its profitability and growth, not to mention its commitment to buybacks and dividends.

AAPL’s recent report further cements the strength of its non-iPhone business. Despite trading near its new records, Apple’s valuation picture appears solid and it could be prepared to keep climbing since it has underperformed the broader tech space in 2021 and over the last 12 months.

AAPL posted blowout Q3 FY21 results on July 27, with revenue up 36% and adjusted EPS 100% higher. The company’s flagship smartphone helped drive the growth, with sales up 50% for the best iPhone growth in years. Apple also continues to enjoy strong expansion outside of the iPhone, with smartphone sales accounting for roughly 49% of Q3 revenue—a few years back iPhone sales often made up over 60%.

Mac sales popped 16% last quarter and iPad climbed 12%. The success of its wireless headphones and other devices helped its Wearables, Home and Accessories space jump 36%. Perhaps more importantly, its services unit climbed 33% to account for 22% of sales—making it easily the second-largest space behind the iPhone.

In fact, many consumers upgrade to new iPhones and other devices habitually, even if there isn’t a game-changing difference between the new model and their current smartphone. Many Apple customers rarely even consider buying anything other than an iPhone, opting to stay in the broader Apple universe for various reasons.

The company said on its January call with analysts that it reached over 1 billion active iPhones and 1.65 billion total active devices. AAPL didn’t provide specific numbers this time around, but they are likely higher and CFO Luca Maestri said in Q3 remarks that it reached a “new all-time high for our installed base of active devices.”

Apple’s long-term growth case is not difficult to make in a world full of smartphone and device addicts, especially as its subscriptions grow. Chief executive Tim Cook focused on transforming Apple far beyond an iPhone company. The aim is to continually make money from its loyal and growing customer base for devices.

These services efforts go beyond its App Store and include Netflix (NFLX - Free Report) and Spotify (SPOT - Free Report) competitors, a subscription news offering, Apple Wallet, a video game platform, digital workout classes, and much more. AAPL finished its most recent period with over 700 million paid subscriptions, up 150 million from the year-ago period and “nearly four times the number of paid subscriptions” it “had only four years ago.”

The company has brought more of its chips in-house, in efforts to one day possibly create what it has referred to as a closed-looped.

AAPL does face some legal battles regarding its own highly profitable app store. But Wall Street doesn’t seem worried, especially when the demand for its first 5G capable iPhone has been strong. 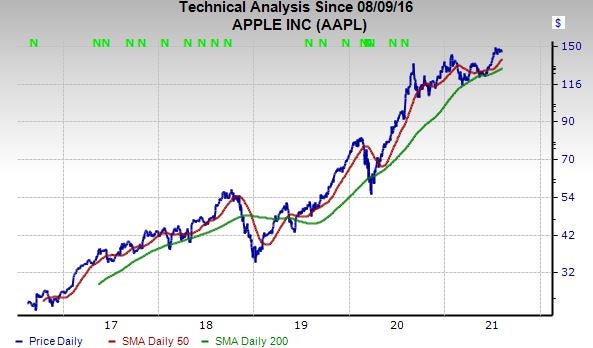 Apple executives did say they expect to experience supply chain setbacks in Q4, with “supply constraints” set to be “greater than what we experienced during the June quarter.” Nonetheless, Zacks estimates call for AAPL’s adjusted Q4 FY21 earnings to climb 68% on 31% stronger sales.

More broadly, Apple’s full-year 2021 revenue is expected to climb by 34% from $275 billion to reach $367 billion. This would crush last year’s 6% sales expansion and mark its strongest top-line growth since 2015.

Meanwhile, its adjusted earnings are projected to soar 70% this year. And it’s still set to grow its top and bottom lines next year, with sales expected to climb to roughly $383 billion. Apple’s bottom-line outlook has improved since its report to help it land a Zacks Rank #1 (Strong Buy) and it almost always beats EPS estimates. This run includes a 30% beat last quarter and 40% in Q2.

As we touched on at the outset, Apple has underperformed its technology peers over the last year, up 30% vs. the Zacks Tech Sector’s 42%. The divergence is larger in 2021, with tech up 22% against AAPL’s 10% climb. Its underperformance, at first glance, might seem odd given its growth and standing within tech and the broader market.

Apple, like all stocks, is always at the risk of underperforming an index and other benchmarks during various periods of time. This is part of the reason why timing stocks is often difficult. AAPL’s inability to outpace tech over the past 12 months is most likely due to the fact that it had previously skyrocketed from its covid lows until its stock split last August.

Over the past five years, AAPL has skyrocketed 440% to crush the tech’s 175% and outclimb both Amazon (AMZN - Free Report) and Microsoft (MSFT - Free Report) . Apple has moved roughly sideways over the last month and it’s fallen from above overbought RSI levels (70) at 78 back in mid-July to closer to neutral (50) at 56.

Even though its stock price is only a few percentage points off its highs, Apple trades at a nearly 30% discount to its own year-long highs at 25.7X forward 12-month earnings. This also marks 10% value against its year-long median and 7% compared to the Zacks Tech Sector’s 27.6X.

Given this backdrop, now appears to be a solid time to consider buying Apple. And long-term investors don’t need to try to get fancy and think owning AAPL is too easy. The stock is certainly no hidden gem, but who cares?

The company is a cash cow and it returns that money to shareholders through buybacks and dividends—$29 billion worth last quarter. Apple closed Q3 with net cash of $72 billion and it plans to keep rewarding shareholders by trying to slowly reduce its cash position. The company’s massive piggy bank also allows it to pursue any new area of tech, including ones not even on the radar at the moment.

Wall Street remains extremely high on Apple, with 18 of the 24 brokerage recommendations Zacks has coming in at “Strong Buys,” with four more “Buys,” and none below a “Hold.” Still, some might opt to search for the next Apple.

Luckily, these are not mutually exclusive, and adding Apple to a well-diversified, long-term portfolio seems like a layup. And think of all the money someone with an extended horizon might have left on the table had they been worried about trying to time AAPL or buying Apple at its “peak.”